Ashanti of Ghana: How Spider Obtained the Sky-God’s Stories

Anansi, the trickster from the folktales of the Ashanti of West Africa, takes the shape of a spider who goes to the sky god to buy his stories to share with the world. Anansi’s stories would become popular through the African diaspora all over the Caribbean and southern US. Below is an animated retelling called “Anansi and the Story of the Sky God.” 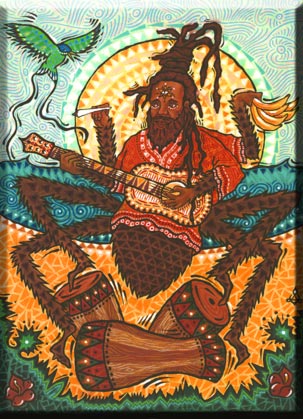 Anansi the trickster is a West African God. He often takes the shape of a spider and is considered to be the god of all knowledge of stories. He is also one of the most important characters of West African and Caribbean folklore. Image from the cover of Martha Warren Beckwith’s book on Anansi Tales from Jamaica.

Anansi Gets the Sky God’s Stories

Once there were no stories in the world. Kwanku Anansi the spider once went to Nyan-Konpon the sky god in order to buy the sky god’s stories. The sky god said, “What makes you think you can buy them?” The spider answered, “I know I shall be able.” Thereupon, the sky god said, “Great and powerful towns like Kokofu, Bekwai, Asumengya have come and they were unable to purchase them, and yet you who are but a masterless man, you say you will be able?”

The spider said, “What is the price of the stories?” The sky god said, “They cannot be bought for anything except Onini the python, Osebo the leopard, Mmoatia the fairy, and Mmoboro the hornet.” The spider said, “I will bring some of all of these.”

The sky god said, “Go and bring them then!”

Anansi set about capturing these. First he went to where Python lived and debated out loud whether Python was really longer than the palm branch or not as his wife Aso says. Python overheard and, when Anansi explained the debate, agreed to lie along the palm branch. Because he cannot easily make himself completely straight a true impression of his actual length is difficult to obtain, so Python agreed to be tied to the branch. When he was completely tied, Anansi took him to the sky god.

To catch the leopard, Anansi dug a deep hole in the ground. When the leopard fell in the hole Anansi offered to help him out with his webs. Once the leopard was out of the hole he was bound in Anansi’s webs and was carried away. The Anansi tales are believed to have originated in the Ashanti people in Ghana. Prior to European colonization, the Ashanti people developed a large and influential empire in West Africa. The Ashanti later developed the powerful Ashanti Confederacy or Asanteman and became the dominant presence in the region. The Asantehene is the political and spiritual head of the Asantes. Photo from africaimports.com.

To catch the hornets, Anansi filled a calabash with water and poured some over a banana leaf he held over his head and some over the nest, calling out that it was raining. He suggested the hornets get into the empty calabash, and when they obliged, he quickly sealed the opening.

To catch the fairy he made a doll and covered it with sticky gum. He placed the doll under the Odum (Tree of Life) where the fairies play and put some yam in a bowl in front of it. When the fairy came and ate the yam she thanked the doll which of course did not reply. Annoyed at its bad manners she struck it, first with one hand then the other. The hands stuck and Anansi captured her.

This is my story which I have related. If it be sweet, or if it be not sweet, take some elsewhere, and let some come back to me.

Anansi and the Stories of the Sky God from an African Tale retold by Gerald McDermott. “A Story A Story” by Gail E. Haley retells how the trickster Anansi obtained the sky god’s stories, written after she spent a year in the Caribbean researching the African roots of many local tales.

Anansi the trickster is a West African God. He often takes the shape of a spider and is considered to be the god of all knowledge of stories. He is also one of the most important characters of West African and Caribbean folklore.

The Anansi tales are believed to have originated in the Ashanti people in Ghana. (The word Anansi is Akan and means, simply, spider.) They later spread to other Akan groups and then to the West Indies, Suriname, and the Netherlands Antilles. On Curaçao, Aruba, and Bonaire he is known as Nanzi, and his wife as Shi Maria. He is also known as Ananse, Kwaku Ananse, Anancy, and in the southern US, Aunt Nancy.

In some beliefs, Anansi is responsible for creating the sun, the stars and the moon, as well as teaching mankind the techniques of agriculture. Anansi shares similarities with the trickster figure of Br’er Rabbit, who originated from the folklore of the Bantu-speaking peoples of south and central Africa.

Story above is edited by Jack Eidt from the version in Wikipedia and the book, African Folktales and Sculpture. P. Raffin and J. Sweeney, New York: Bollingen Foundation, 1952.