Electric Streetcars: Back to the Urban Future

By
The Outpost
– Posted on August 25, 2012Posted in: Transportation

The movement toward revitalization of downtown areas in the United States with streetcars brings 19th century urbanism together with 21st century sustainability, despite the usual fossil fueled detractors. “The ride quality and accessibility of a streetcar is an advantage over buses,” says Ethan Mellone, rail transit manager of Seattle’s streetcar.

By Caroline Porter in The Wall Street Journal

Cities from Los Angeles to Atlanta are making big bets to revitalize their downtowns by bringing back a form of transportation many abandoned decades ago: the streetcar. Some cities are counting on help from federal stimulus dollars, but a few are going it alone.

Late last month, about 500 residents in one part of Kansas City, Missouri, voted to create a special taxing district to raise $75 million over about two decades for a streetcar. In the same week, Cincinnati officials passed a measure to allow about $15 million to be spent on a 3.6-mile loop. And in Los Angeles, the city council approved a plan to ask voters if they are willing to pay additional taxes for a four-mile downtown streetcar loop.

Proponents say the streetcars would boost economic growth and catch the fancy of younger generations. “Kansas City’s downtown has bled jobs, people and buildings for decades,” said David Johnson, a 38-year-old engineer and co-founder of Streetcar Neighbors, a residents group that advocates for streetcars in that city. “We’re trying to reinvigorate the downtown.”

But others see a waste of tax dollars on projects that, they say, offer little more than a way to move downtown workers from their offices to lunch. “I would love a rail system that actually gets people to work, not just to buy a sandwich,” said Josh Spring, the director of the Greater Cincinnati Homeless Coalition, which opposes the project there, which is backed by about $40 million in federal dollars.

Streetcars, which typically run as single-car, electric-powered units on steel tracks in a condensed area, once were a common part of the urban landscape. But most cities’ tracks were ripped out to make more room for automobiles on busy streets. Streetcars are distinct from trolleys, often vintage vehicles that cater to tourists, and light-rail systems, which typically travel to and from a city’s suburbs and carry more people in multiple cars. Connecting downtown Tampa with popular sites at the port and downtown, the TECO Line Streetcar has revitalized the city.

From Eric Metz at Urban|One: “Larger than a bus, but smaller than a light-rail vehicle, streetcars run on fixed rails embedded in public streets, moving with the flow of traffic. They have proven to be serious economic development tools, spurring substantial investment and community development in numerous U.S. cities – such as Portland, OR, Seattle, WA, and Tampa, FL. Streetcar systems have proven to be economic development tools because they deliver pedestrian traffic that assures developers, investors, and cities that their projects will have high levels of street-front and ground floor activity – which are critical criteria for commercial and retail tenants. These investments are targeted to capture increased foot traffic sales, and take advantage of increases in location desirability and connectivity to transit networks. Modern streetcars are designed to integrate with existing urban environments and street corridors, and do not require dedicated rights-of-way.”

Atlanta and Salt Lake City already have broken ground on streetcar projects with a total of $74 million in federal funding. Minneapolis is preparing to apply for more federal money to get a project under way after receiving a $900,000 federal planning grant in late 2010, said Peter Wagenius, a policy director for Mayor R.T. Rybak. “These streetcar lines are short not because they should be, but rather because cities have been doing what was possible with available funding,” Mr. Wagenius said.

“Taken for a Ride,” by Jim Klein and Martha Olson 1996 documentary on how and why public transit systems disappeared in US cities.

Many cities point to streetcar projects like the one in Portland, Oregon, which opened its first leg in 2001 and is expected to expand to 7.3 miles of track next month from four miles now. City officials in a 2008 report cited the streetcar as impetus for more than 10,000 new housing units and 5.4 million square feet of office, institutional, retail and hotel construction within two blocks.

“Portland wasn’t like a mecca before. It was another dirty midsized city,” said Mr. Johnson of Kansas City, who says he has no problem paying an extra $200 per year for the streetcar to roll into his city of 480,000.

But some experts say not every city can be turned into the next Portland. Randal O’Toole, a senior fellow with the Cato Institute, a libertarian think tank, published a paper in June titled “The Great Streetcar Conspiracy,” in which he calls streetcars the “latest urban planning fad,” claiming that operation costs per mile for streetcars are double those of buses. “Putting 125-year-old technology into modern cities is going to create more congestion, dangerous situations for pedestrians and divert taxpayers’ money from transit that people really need to transit that is silly,” Mr. O’Toole said.

Mr. O’Toole has said $435 million in city business incentives helped Portland’s celebrated Pearl District, celebrated for its economic development, while other areas served by the streetcar faltered without help from the city. 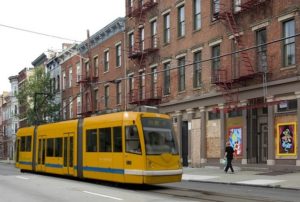 Electric Transit Renovation: Rendering of a streetcar on Race Street in Over-the-Rhine neighborhood of Cincinnati.

Note to Cato Institute fellow Randal O’Toole: Streetcars, though requiring a higher initial capital investment, cost significantly less to operate, with higher ridership capacity and longer durability. They run on electricity rather than gas, drive quieter, and are economic development magnets. Funded by oil interests, Mr. O’Toole might advocate that road construction pays for itself, but seems to miss the external costs that fossil-fueled transportation places on society through congestion, carbon and smog emissions, and fragmenting urban neighborhoods. Gas taxes, woefully deficient, cannot pay for either roads nor transit. -Jack Eidt

Other cities have had less operational success with their projects. Last year, officials in Tampa, Fla., scaled back the hours of operation and the frequency of rides in order to balance the annual $1.3 million operating budget for a 2.7-mile streetcar, according to Marcia Mejia, public information officer for the area’s regional transportation agency. Ridership numbers for a streetcar in Little Rock, Ark., were 112,000 per year, rather than the estimated 130,000. City officials say construction work hampered its usage.

Kansas City officials plan a 2.2-mile streetcar route now budgeted at $100 million. Danny Rotert, a spokesman for Mayor Sly James, said $75 million will come from the property- and sales-tax increases voters approved last month, and $25 million will be cobbled together with city funds. The city was hoping for $25 million in a federal grant competition this year but didn’t win.

San Francisco’s Market Street Railway: Some have considered a complete ban on automobiles for the city’s most busy commercial thoroughfare.

From Eric Metz at Urban|One: Streetcars are major urban and economic development tools because they provide investors, developers, and potential renters/buyers assurance that their offices, properties, and projects will have permanent access to public transit. In addition, a streetcar system in Downtown L.A. will close the geographic and “travel distance” gap between the area’s neighborhoods. Currently it is simply too arduous to walk across Downtown from its edges, and parking multiple times throughout the course of a day can be expensive, cumbersome, and time consuming.

“We’re trying to recruit young, entrepreneurial talent,” Mr. Rotert said, who acknowledged that the streetcar is a sizable investment but believes its long-term growth will prove its worth. “It’s about getting residents and visitors to and from the main destinations around the downtown area.”

But Sue Burke, 58, owner of an industrial-filter wholesaler in Kansas City, is against the streetcar project. The line on Grand Boulevard would go right by the front stoop of her business, and she said construction traffic and the extra taxes would leave her business facing an uncertain future. “It’s way too much money for the anticipated ridership,” she said. “If I have to leave the district because of this, I’m leaving Kansas City.”