The idea of the “utopian” community began in 1516 with Sir Thomas More’s fictional perfected society to present-day attempts to build the most sustainable urban ecosystem. With the case of Songdo International Business District, South Korea, the move toward smart eco-cities implies either living together in harmony, and/or a new series of technologies marketed under the “eco” banner. 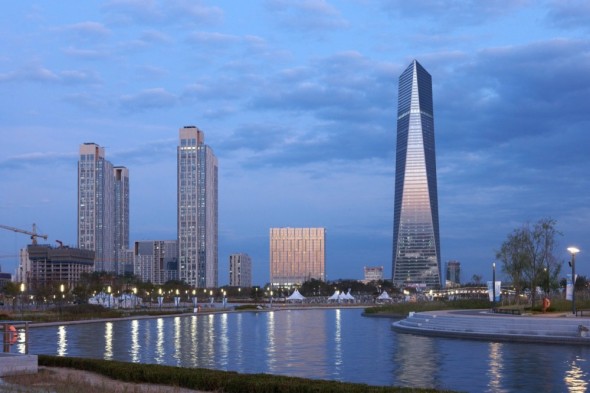 Songdo, South Korea, is seen as clean-tech Startup City of sustainable urban life. A Korean “mini-Manhattan” creating a district imitating its density, structure, and Central Park. A city of Big Data and social-engineering see as a realization of Francis Bacon’s “New Atlantis” or Orwell’s “1984,” depending on how you regard its technology. Image: Kohn, Pederson Fox.

Songdo IBD, on the South Korean coast is an ambitious new community project and the most expensive real estate venture in the world. Scheduled for completion in 2016, Songdo, a designated “Free Economic Zone” with advanced technology infrastructure, is under construction on 1,500 acres of reclaimed land from Incheon Bay on the Yellow Sea.

With 600 acres of open space and parks and environmental attributes like wind turbine power and rainwater collection, it aims to be the world’s first LEED-certified city. Designed to emit a third of the greenhouse gases of a typical metropolis its size, it also markets itself as an “aerotropolis,” built proximate to Incheon International Airport, with a potential to benefit from international access. Songdo: High on concept, but will it serve a community sustainably? Photo By Guilio Di Sturco in “Geo.”

South Korea had an interest in creating an urban hub for conducting business in northeast Asia. Thus, Gale International, a global real estate development company, partnered with Korean construction and steel giant, POSCO E&C, with technology provided by Cisco, to create a medium-sized central marketplace for 65,000 residents and 300,000 workers.

People could live and work in close proximity, with full technological integration, where almost any device, building or road will be equipped with wireless sensors or RFID microchips. This will result in smart innovations such as streetlights that automatically adjust to the number of people out on the street. Homes would feature automated sensors, called domotica, where everything will be computerized and on a network. Either a realization of Sir Francis Bacon’s New Atlantis or Orwell’s 1984, this depends on where one draws the line between convenience and intrusion.

Francis Bacon’s “The New Atlantis” examined the creation of a utopian land where “generosity and enlightenment, dignity and splendor, piety and public spirit” are the commonly held qualities of the inhabitants of the mythical island of Bensalem.

Songdo International Business District: Over the past decade, the South Korean city of Songdo has sprung up on 600 hectares of reclaimed land on the Yellow Sea, 65km south of Seoul. Linked by a 12km bridge to Incheon International Airport, the city is hailed as a sustainably-built experimental prototype of the aerotropolis, an urban development concept with the potential to significantly affect the way we travel.

From its own promotion materials, “Songdo IBD boasts the wide boulevards of Paris, a 100-acre Central Park reminiscent of New York City, a system of pocket parks similar to those in Savannah, a modern canal system inspired by Venice and convention center architecture redolent of the famed Sydney Opera House.” One cannot resist seeing this well-financed corporate sustainability move as being contradictory to reducing our collective ecological footprint, despite the encouraging ghg projections. It resembles a more modest Dubai or Masdar City in Abu Dhabi, without the desert, as well as a number of African cities under construction. Greg Lindsay: South Korea has always been a ravenous adopter of technology, but it also a boneyard for big ideas that never quite caught on, including smart cities that look pretty dumb in retrospect [LG’s Tomorrow City]. Central Park in Songdo IBD.

Across the bridge from Songdo, Incheon airport is building a massive playland to rival Macau and Las Vegas. It is already the No 1 duty-free airport in the world, with $1.53bn in sales last year.

Outside the terminal, on the man-made island where it sits, development is underway on a mega-resort and casino, a water park, a shopping mall and several hotels. By the end of the decade, this new pleasure carnival will open and connect back to the airport by a magnetic levitation train that will make a 33-mile loop around the entire island.

Greg Lindsay on Cisco’s Instant City Formula: Can we believe the hype?

Ambitious, but true sustainability is still in question when instant cities appear on raw land, in this case reclaimed fill on the Bay of Incheon. Moreover, Gale and Cisco plan to build 20 more across China, India, the Middle East and Africa. Its focus on technology might be over-speculative for how we will be surviving in the next ten to 100 years, but as long as the powers of Western capitalism keep rolling, Smart Cities are here, whether we like them or not.