On one hand, Detroit turns the water off for communities challenged by its legacy of disinvestment and neglect. Yet, with urban farming, electric streetcars, neighborhood reinvention, Mayor Mike Duggan’s pledges begin to manifest in the city’s North End, despite considerable financial and cultural impediments. John Eligon elaborates. 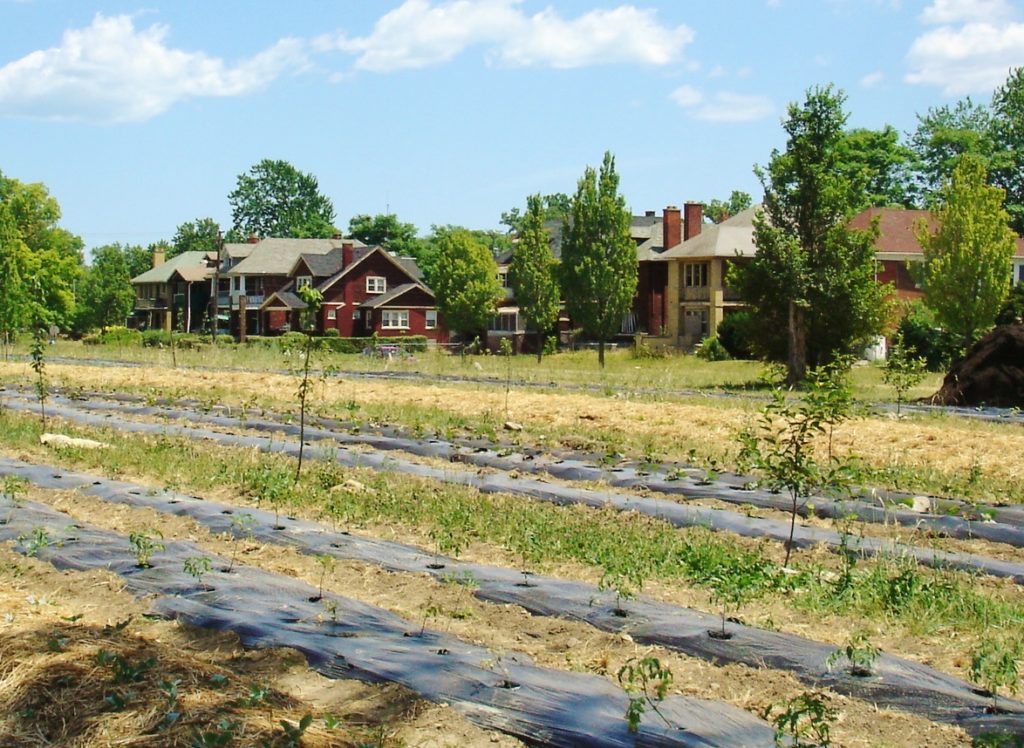 Food Field, a new urban farm on four acres in Detroit’s Durfee neighborhood. Detroit is possibly the most famous example of a city with an excess of newly vacant and neglected land in need of regrowth and reinvention. Their well-publicized economic collapse, with blighted, partially-demolished neighborhoods, represent the decline and outsourcing of the US automobile manufacturing, as well as myopic public policies and racist white-flight to the suburbs. Photo By Jack Eidt.

Testing Ground for a New Detroit

By John Eligon, Published in The New York Times

There is immense potential in this shattered urban landscape, despite more than a half-century of government mismanagement and residential and industrial flight.

Mayor Mike Duggan, who took office in January, promised immediate improvements after the city hit a low point last year, becoming America’s largest to file for bankruptcy. The North End captures both the hope and challenge of the mayor’s pledge. So tracking what happens in this neighborhood this year and next will tell a lot about whether this metropolis, with nearly 690,000 residents, can rebuild.

“The North End is an area that has real potential to come back,” the mayor said in an interview. “It’s got a proud history in this city.”

Annexed by the city in the late 19th century, the North End once was the northernmost point in Detroit, bordering on the cities of Highland Park and Hamtramck. It quickly became a haven for the upper class.

These days it still has some of the city’s most glorious homes bordering some of its harshest blight. While it counts judges, doctors and other professionals in its ranks of homeowners, its remaining residents are mostly low-income blacks who bear the brunt of Detroit’s economic decline because of a legacy of confinement to the lowest-paid, least-skilled and least-mobile jobs.

Electric streetcars may roll Detroit’s streets again after 60 years in an attempt to use mass transit to resuscitate the bankrupt auto capital. Of the 45 streetcar systems built or considered in U.S. cities since 2000, Detroit’s M-1 Rail is the only one begun with mostly private money rather than a local tax, said Carmine Palombo, deputy executive director for the Southeast Michigan Council of Governments.  — Bloomberg

Older residents remember when Oakland Avenue, the North End’s main north-south drag, was a crowded strip of businesses and bars, such as Phelps Lounge, where some of black music’s hottest acts, like the Temptations, performed in the 1960s. Or when the likes of Aretha Franklin, Smokey Robinson and Diana Ross lived in the well-to-do neighborhood alongside Detroit’s black elite, who migrated there after World War II, exceptional for a time when racist policies generally kept black residents crowded into the city’s most tattered sections.

Now there are more open fields than buildings along Oakland. And the most notable concerns operating on the street are a liquor store, a few churches and an old Jewish bathhouse.

“I drive over occasionally just to look at the old neighborhood,” said Ms. Franklin, who lived in the North End in the 1950s when it was thriving with affluent blacks. “You wouldn’t even recognize it now.” Still the city has targeted the North End as among the first neighborhoods for renewal. Situated just above the city’s vibrant Midtown and Downtown corridor, the North End is a ripe location for commercial and residential development. Ms. Jones picking greens for an elderly neighbor at the MUFI farm. After initially being skeptical about the organization’s motives and commitment to the neighborhood, Ms. Jones now volunteers regularly and helps distribute food to local residents. Photo: Fred R. Conrad/New York Times

In a plan for the first phase of a streetcar project, the neighborhood is the end of the line. The city is offering financial incentives for employees of Wayne State University and two nearby hospitals to rent or purchase homes in parts of the North End. Although historically the North End sits to the east of Woodward Avenue, city officials have grouped neighboring communities west of Woodward into the North End. The enlarged area is sometimes referred to as the Grand Woodward Corridor.

It already has some stable housing stock and deeply rooted families in which mothers and brothers, cousins and uncles all live around the block from one another, occupying homes that have been in their families for three or four generations. These are people like Ms. Byrd, a home health aide, and her ailing husband, Cornelius, 71, a Detroit Police retiree, who are trying to maintain their imposing brick home. Or Banika and Olando Jones, a sister and brother living on one of the community’s emptier blocks.

Today, 60% of Detroit children live in poverty and the infant mortality rate has surpassed Mexico’s. In some neighborhoods, more streetlights are broken or off than on, and there are more than 80,000 abandoned buildings citywide. Simultaneously, City Hall is being crushed under the weight of an imposing and nationally-coordinated media and financial occupation by corporate America.  — Justin Wedes, CounterPunch

New people and also organizations are moving in, like the Michigan Urban Farming Initiative, started by two University of Michigan graduates in their 20s. The city has already started tearing down blighted homes all over, including in the North End, where nearly 70 houses have been demolished so far this year and about 240 more are under contract to be razed.

The Duggan administration has started forcing owners to fix up their abandoned or run-down properties or lose them, an initiative that already has targeted dozens of homes in two of the North End’s finer areas and is expected to reach Arden Park by year’s end. The city has paid developers to rehabilitate almost 40 abandoned houses in a 24-block area just west of Woodward and to get them occupied by the end of the year.

Artists’ studios have begun to pop up, grass-roots efforts are underway to open a cooperative grocery store, and one longtime resident is trying to build a nine-hole miniature golf course in the neighborhood. A community development organization is working to expand Delores Bennett Park, named after the North End’s matriarch, who is 81 and still commands the respect of the troubled youths she helps with finding jobs.

While working streetlights are scattered about the North End, many lights are broken, leaving long dark stretches. Installation of new LED lighting in the neighborhood is expected to start next year.

STORY: Diego Rivera and the Fall and Rise of Detroit North End residents are not necessarily looking for a return to their neighborhood’s heyday. Their desires are more pressing and basic — being able to sit on their porches at night and actually see their surroundings; walking the streets without worrying about who is in the high brush or in abandoned buildings along the way; keeping away scrappers, who descend on houses, especially vacant ones, and steal all the metal to sell at a scrap yard; and being able to shop for basic goods within walking distance.

But the city confronts longstanding social and cultural hurdles. Its populace, which is 83 percent African-American, has become inured to disappointment and cynical about years of political corruption, mismanagement and broken promises. Longtime residents will want to see whether prosperity can start to reach a broad base — including the poor and less educated — or merely widen the divide. Residents openly wonder whether city leaders want to drive them out to make way for a more affluent class.

Detroit borders the Great Lakes system, containing 21 percent of the world’s surface freshwater. The lakes are the source of the city’s water supply, but a growing number of residents can’t turn on the tap. Over the past three months, the water department has conducted an aggressive shut-off campaign to get more than 90,000 customers to pay $90.3 million in past-due bills. Between March 25 and June 14, 12,500 Detroit customers had their water shut off.  — Anna Clark, New York Times

The North End, like other neighborhoods, also struggles with an array of sometimes competing interests: public and private agencies, real estate speculators and longtime residents. Some newcomers have drawn heightened scrutiny from residents and other community organizations. The Vanguard Community Development Corporation, a nonprofit group founded in 1994 that works to attract commercial and residential investment to the North End, and the Michigan Urban Farming Initiative have been at odds since the farmers arrived two years ago.

For Ms. Byrd and her husband, who bought the house on Arden Park more than 20 years ago, the struggles are no less complicated.

“I feel like the house is falling apart,” said Ms. Byrd, despairing this spring as she tried to scrounge up $4,500 in overdue taxes to keep the city from taking her family’s home and having it become another abandoned property. Like so many others, the Byrds are barely hanging on. Ms. Byrd works two jobs in elder care, sometimes in 12-hour shifts, and her husband, lives on a police pension that remains subject to the city’s bankruptcy negotiations.

Read the entire article at The New York Times.