Living and dying close to the edge in the 1980s Manhattan world of art and culture, Jean-Michel Basquiat moved from guerrilla street artist to producing innumerable works worth millions, until his drug-induced end in 1988. Profit I – Jean Michel Basquiat, created in Italy in 1982, mixes the precedent of historical painting with urban graffiti (and a nod to Jackson Pollock) to create a heroic character that is part self-portrait and part voodoo shaman. In 2002, it was sold to Lars Ulrich, drummer for rock band Metallica for a then record five and a half million dollars.

Writing on Walls, Spraying on Canvas, Taking Over the Streets: Basquiat’s 1980s Run

Jean-Michel Basquiat (December 22, 1960 – August 12, 1988), US artist of Haitian-Puerto Rican descent who emerged from the 1970s New York City Punk scene as a gritty street-smart graffiti artist. He first achieved fame as part of SAMO©, or ‘Same Old’, a graffiti duo scrawling enigmatic pseudo-religious epigrams in the cultural hotbed of the Lower East Side of Manhattan at the same time that Hip Hop emerged.

Basquiat hit fame at the beginning of the new decade, exhibiting his neo-expressionist paintings that involved traditional street designs, primitivist symbols, appropriation and text, strewn together in vibrant canvases that attracted impressively high bids at auction. Despite his fame, his paintings never strayed far from concepts of class struggle and poverty, delving into his urban upbringing and Afro-Caribbean heritage. His mixed collages and figurative drawings addressed race, power, politics and the legacy of colonialism.

I have a painting where somebody’s holding a chicken, and underneath the chicken is somebody’s head.  — Jean-Michel Basquiat

2009 documentary film, Jean-Michel Basquiat: The Radiant Child, directed by Tamra Davis, was first screened as part of the 2010 Sundance Film Festival and was shown on the PBS series Independent Lens in 2011. Jean-Michel Basquiat: Bird on Money, 1981. Acrylic, crayon on canvas. The painting is an homage, one of many, to one of his heroes, jazz saxman Charlie Parker, who was nicknamed ‘Yardbird’, or ‘Bird’ for short.

Fred Hoffman hypothesizes that underlying Basquiat’s sense of himself as an artist was his “innate capacity to function as something like an oracle, distilling his perceptions of the outside world down to their essence and, in turn, projecting them outward through his creative acts.” Additionally, continuing in the mode of a graffiti artist, Basquiat often incorporated words into his paintings.

According to Andrea Frohne, Basquiat’s 1983 painting ‘Untitled (History of the Black People)’ “reclaims Egyptians as African and subverts the concept of ancient Egypt as the cradle of Western Civilization.” At the center of the painting, Basquiat depicts an Egyptian boat being guided down the Nile River by Osiris, the Egyptian god of the Earth and vegetation. 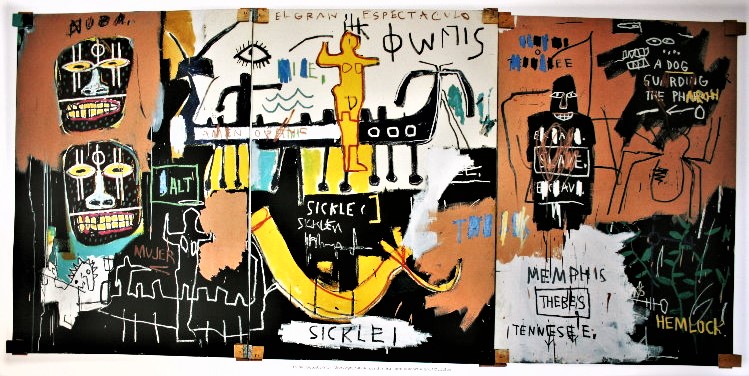 Untitled (History of the Black People) (1983) – Jean-Michel Basquiat. As though he were reconstructing an epic history, or precedent, for his own ancestors’ arrival on the American continent, this expansive work of the early 1980s compresses together the relationship of Egypt to Africa, with references to more local centers of African-American music and greater southern culture, such as Memphis, Tennessee.

On the right panel of the painting appear the words “Esclave, Slave, Esclave.” Two letters of the word “Nile” are crossed out and Frohne suggests that, “The letters that are wiped out and scribbled over perhaps reflect the acts of historians who have conveniently forgotten that Egyptians were black and blacks were enslaved.” On the left panel of the painting Basquiat has illustrated two Nubian-style masks. The Nubians historically were darker in skin color, and were considered to be slaves by the Egyptian people.

“I cross out words so you will see them more; the fact that they are obscured makes you want to read them.”  — Jean-Michel Basquiat

Basquiat painting live in Downtown 81, a vérité movie written by Glenn O’Brien and shot by Edo Bertoglio in 1981, but not released until 1998

Basquiat sold his first painting in 1981, and by 1982, spurred by the Neo-Expressionist art boom, his work was in great demand, showing alongside artists like Julian Schnabel (who would later make a bio pic about him), David Salle, and Italian Francisco Clemente. In 1985, he was featured on the cover of The New York Times Magazine in connection with an article on the newly exuberant international art market; this was unprecedented for an African-American artist, and for one so young. His growing heroin addiction, however, began to interfere with his personal relationships.

In 1982, through an introduction by art dealer Bruno Bischofberger, Basquiat met Andy Warhol, who would come to be a mentor and idol. The two collaborated on a series of paintings, but their relationship became increasingly strained and all but ended in September 1985, when “Warhol and Basquiat: Paintings” opened at the Tony Shafrazi Gallery in Soho to mostly negative reviews. Warhol’s death in 1987 deeply affected Basquiat and drove him further into the dark world of drugs that ultimately cost him his life.

STORY: Nico, Warhol Muse, from the Dark Side of the Street Following Basquiat’s tragic death from a heroin overdose in 1988, the artist’s popularity has only risen, and his contemporary style has been idolized in film, music and literature.

For some critics, Basquiat’s swift rise to fame and untimely end from addiction and estrangement epitomizes and personifies the overly commercial, hyped up international art scene of the mid 1980s, a cultural phenomenon that for many observers was symptomatic of the largely artificial bubble economy of the era. These conditions continue to be recognizable 30 years later.

Basquiat’s fame and value only continue to grow, due to the complexity of his vision, and today’s magnification of the racial/social struggle for/against celebrity-driven commercialism.