The composer Dmitri Shostakovich, considered the conscience of the Russian Revolution, denounced twice by Stalin, later lent his name to the Soviet Communist Party.

To me he seemed like a trapped man, whose only wish was to be left alone, to the peace of his own art and to the tragic destiny to which he, like most of his countrymen, has been forced to resign himself.” — Nicholas Nabokov on meeting Shostakovich in 1949 in New York. Image from Gogol’s “The Nose” Opera By Shostakovich.

(1906-1975) was a Russian composer who lived through the October Revolution, a civil war and two world wars, achieving fame in the Soviet Union under the patronage of Leon Trotsky‘s chief of staff Mikhail Tukhachevsky. He had a complex and difficult relationship with the Stalinist bureaucracy, alternately denounced and celebrated. In later years, he joined the Communist Party but left a legacy of both dissidence and servitude to the Soviet political machine.

The Great Mravinsky conducts the Leningrad Philharmonic at the Leningrad Conservatory Hall. This is the 4th concluding movement of Shostakovich’s Symphony no. 5.

Shostakovich’s works are broadly tonal and in the Romantic tradition, but with elements of atonality and chromaticism. His style evolved from the brash humor and experimental character of his first period, exemplified by the operas The Nose and Lady Macbeth of Mtsensk, into both the more introverted melancholy and nationalistic fervor of his second phase (the Symphonies No. 5 and No. 7, “Leningrad”), and finally into the defiant and bleak mood of his last period (exemplified by the Symphony No. 14 and Quartet No. 15). His music shows the influence of Prokofiev and Stravinsky in his early period, Bach in his fugues and passacaglias; Beethoven in the late quartets; Gustav Mahler in the symphonies and Berg in his use of musical codes and quotations.

Many commentators have noted the disjunction between the experimental works before his official denunciation in 1936 and the more conservative ones that followed; the composer told Flora Litvinova, “without ‘Party guidance’ … I would have displayed more brilliance, used more sarcasm, I could have revealed my ideas openly instead of having to resort to camouflage.”

In 1936, the government, most probably under orders from Stalin, harshly criticized his opera Lady Macbeth, causing him to withdraw the Fourth Symphony during its rehearsal stages. Shostakovich’s music was officially denounced twice, in 1936 and 1948, and was periodically banned. His Fifth Symphony of 1937 was a response to this, and because of the 4th Movement, considered musically more conservative.

In 1948 Shostakovich, along with many other composers, was denounced for formalism in the Zhdanov decree. Andrei Zhnadov, Chairman of the RSFSR Supreme Soviet, teamed up with the General Secretary of the Composer’s Union, Tikhon Khrennikov, to accuse Shostakovich and other composers (such as Sergei Prokofiev and Dmitry Kabalevsky) for writing inappropriate and formalist music. The conference resulted in the publication of the Central Committee’s Decree “On V. Muradeli’s opera The Great Friendship,” which was targeted towards all Soviet composers and demanded that they only write “proletarian” music, or music for the masses. Most of Shostakovich’s works were banned, he was forced to publicly repent, and his family had privileges withdrawn. 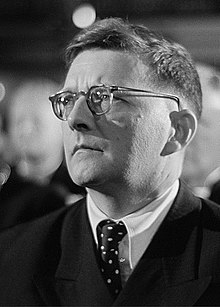 Dmitri Shostakovich in 1950. From Wikipedia.

Nevertheless, Shostakovich also received accolades and state awards and served in the Supreme Soviet of the RSFSR. In 1960 he joined the Communist Party, interpreted variously as a show of commitment, a mark of cowardice, the result of political pressure, and as his free decision. Shostakovich’s response to official criticism and, what is more important, the question of whether he used music as a kind of abstract dissidence is a matter of dispute. Legend has it that at the first performance of Shostakovich’s Symphony No. 5, during the applause immediately after the performance, Mravinsky took the score in his hand and waved it above his head. Mravinsky gave world premieres of six symphonies by Shostakovich: numbers 5, 6, 8 (which Shostakovich dedicated to Mravinsky), 9, 10 and finally 12 in 1961. His refusal to conduct the premiere of Shostakovich’s 13th Symphony in 1962 caused a permanent rupture in their friendship.