Maya Ruins at Tikal: A New Beginning at Winter Solstice

By
Jack Eidt
– Posted on December 21, 2012Posted in: Eco-Cultural-Travel, Rituals and Traditions

The Classic Maya, advanced in science, astronomy, art and divination, built cities across Mesoamerica. We can learn much from their rise and fall into the jungle abyss. Archaeologists have theorized the downfall of the Classic Maya might have resulted from overpopulation relative to agricultural productivity, drought, warfare, pestilence, earthquake. Frankly, humanity today faces the same challenges — and more.

Ceremonial City Returned to the Jungle

Twenty five hundred or more years ago, a group of peoples settled on a hill that we call Tikal, surrounded by the lowland rainforests of what is today known as the Petén Basin of northern Guatemala. Their descendants would create a remarkable civilization that populated cities and villages across much of what is now southern Mexico, Belize and Guatemala. Tikal was home to perhaps 100,000 people. Thatched farmsteads and fields would have stretched as far as the eye could see. 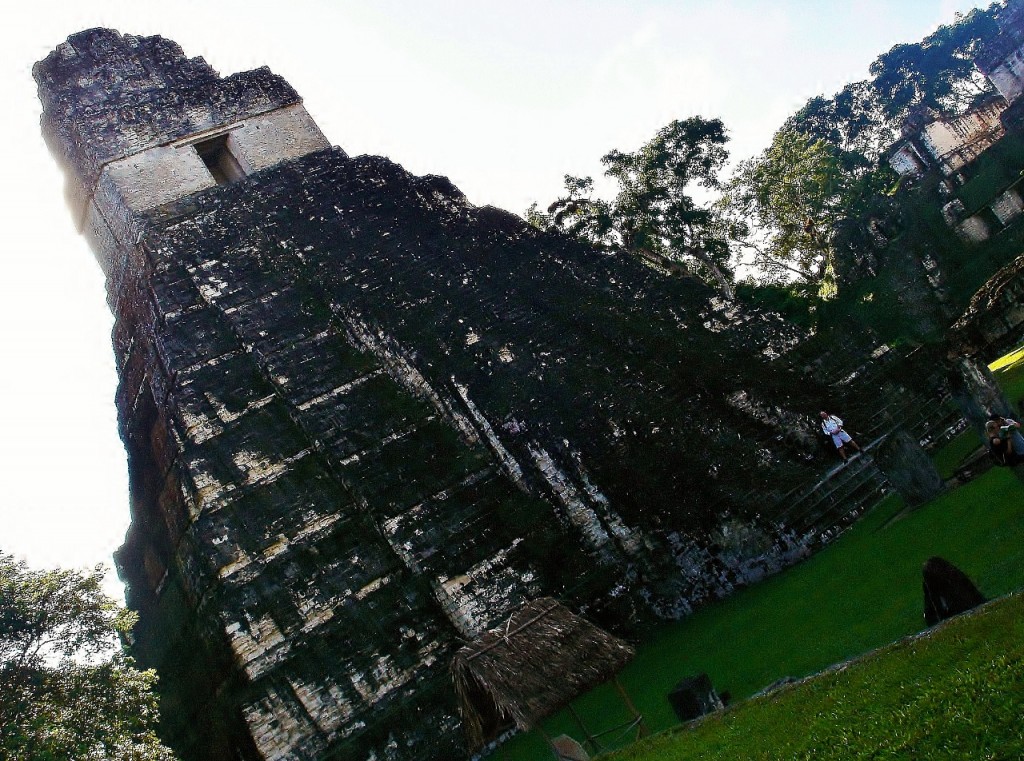 The Maya thrived for nearly 2,000 years, and disparate communities continue to inhabit areas of Southern Mexico, Guatemala, Belize, and Honduras. Without the use of the cartwheel or metal tools, they engineered massive stone structures designed along predetermined axes aligned with cardinal directions.

They were accomplished scientists. They developed their own mathematics, using a base number of 20, and had a concept of zero. Fifteen hundred years ago, scribes in the great city of Tikal wrote in Yukatekan, an ancestor language to the one spoken to the north in today’s Mexico. The Temple of the Masks, in the background, was adorned by a pair of large grotesque masks. The Tlaloc War Serpent on an Early Classic covered bowl from Tikal. Photo By Linda Schele.

In the steamy-hot rainforests of Tikal, in the fourth and early fifth centuries, the city was huge, growing from the conquest of territory and capturing slaves for sacrifice, fought under the symbol borrowed from Mexico’s Plumed Serpent Quetzalcoatl, the War Serpent. From observatories, they tracked the cycles of Venus and Jupiter, which informed their battle decisions in a warfare institution called Tlaloc-Venus, named after the goggle-eyed deity from Teotihuacan.

Ancient Day-Keepers Marking the End of a Cycle

The ancient Maya were also accomplished horologists: they studied time. They tracked the lunar year and solar year of 365 days. Beyond quantity of time, they also studied its qualities, especially its meaning for human affairs. The very foundation of their calendar rests on a cycle of 260 named and numbered days. The length of this cycle, and its day names and divinatory interpretations, have no obvious astronomical correlation, yet came about through centuries of conceptualization. For the ancient and modern Maya, the ceiba signifies the World Tree, the central axis of the cosmos or “Wakah-Chan,” or “Raised-Up Sky,” connecting the three levels of creation.

From the thousands of writings destroyed over time and conquest, we have but the mytho-historical Popol Vuh (Book of the Community) remaining that records their creation myth. In addition, only four surviving codicies, accordion-like books, made of beaten-bark paper covered with plaster, serve as almanacs for the timing of ritual. They record, in pictures and writing, information about which gods and what acts were associated with each day in the calendrical cycles. Astronomical tables for anticipating favorable cycles of Venus and eclipses of the sun were also included as books of learning and prognostication for priests specializing in the use of the calendar.

According to Barbara Tedlock in her magnificent book Time and the Highland Maya, contemporary daykeepers in Guatemala continue to count the 260-day cycle, each having its own character or identity that influences events or a person’s luck. Mayan time exceeds the limits of the mathematically-describable and involves questions of timeliness, destiny, divination, religious ritual, and cosmology. Clearly, the Maya calendar does not conform to easily reducible notions such as the “End of the World.”

The 20 naguales, or faces of the day, of the Mayan calendar, portraying animals and object relevant for divination and measuring of cycles.

The Maya year was called a tun, consisting of 360 days, plus five extra used to rest and meditate. They grouped their years into 400-year cycles, called B’aktunes. Number 13 was sacred to the Maya, and 13 B’aktunes had to pass to close a complete cycle in time, equalling 5,200 years. The solstice of 2012 marks the end of the last B’aktun of the current era, number 13. No disaster foretold, only the demarcation of a new beginning. A New Beginning: Tikal at dawn, fog shrouding the mysteries, the place where in AD 378, the huge city expanded further, taking captives for sacrifice, deciding battle moves based on the cycles of Venus and Jupiter. Today’s shift might imply it is time to return to the wild rainforest.

In the Maya cosmovision, everything is connected. Since birth, a companion spirit accompanies all humans, represented by an animal or supernatural guardian force, called a nagual. The calendar divination uses 20 different day names, associated with naguales such as “Monkey,” “Deer,” and “Jaguar.” Each person gets a number between 1 and 13, which determines the intensity of their birthday nagual’s energy, hints at a persons character, divines their life goals and challenges.

The Maya cosmos still survives as a place today, and no matter where you live, it remains vibrant and glowing on the path to the Milky Way.

Looking up into the sky, the reenactment of Creation is inscribed in the stars, just as the Maya read and recorded in their antiquities and codexes, ruined temples and calendrical system. “As is the sky, so is the earth,” a Maya teacher from Yalkoba is quoted in Maya Cosmos: Three Thousands Years on the Shaman’s Path, by Freidel, Schele, and Parker.

In the ninth century, the Maya world was turned upside down. Tikal and its sacred temples and palaces, like many of the Mayan centers, were abandoned, and never recovered. Only a fraction of the Maya people survived to face the Spanish conquistadors in the 16th century. The End of the World may be a silly concept, but we can learn from the Maya and their collapse.

Archaeologists have theorized the downfall of the Classic Maya might have resulted from overpopulation relative to agricultural productivity, drought, warfare, pestilence, earthquake. Frankly, humanity today faces the same challenges — and more. We can learn much from the mystical knowledge handed down by the Maya and their eventual collapse.

To step into the forests of Tikal, howler monkeys roaring overhead, climbing ruined temples once adorned with mystical art, designed and engineered with scientific and astronomical precision, remains a mighty lesson.

We must learn to read the sky, to listen to the wind, to be conscious of the people, animals, and thunder beings around us. To be thankful. To remain connected. To listen and learn from the mystical knowledge handed down. The Maya inhabitants of the highlands and lowlands of Central America must be heard.