By
The Outpost
– Posted on October 26, 2016Posted in: Political Geography

Despite press releases that say the State Department has harsh words regarding Congress’s decision to approve more than $50 million in aid for Honduras, they certified the corrupt government with an abysmal human rights record. They are all clearly guilty of aiding and abetting the murderous regime of Juan Orlando Hernandez. Demonstrators clash with riot police in Tegucigalpa, the Honduran capital, in October. They were protesting unresolved killings of activists, a sticking point in freeing up U.S. aid for Honduras. (Associated Press in Los Angeles Times)

By Mark Weisbrot, Published by The Hill

Since a 2009 military coup against the democratic government of President Mel Zelaya, Honduras has become the most dangerous country in the world for environmental and human rights activists. On October 17,two more prominent rural organizers, José Ángel Flores and Silmer Dionisio George, were assassinated in Colón. Flores was the president of the Unified Campesinos Movement of the Aguan Valley (MUCA), and George was a well-known leader from the same organization.

This follows the October 9 assassination attempts against Tomás Gómez Membreño, the general coordinator of the Civic Council of Popular and Indigenous Organizations of Honduras (COPINH), and COPINH community leader Alexander García Sorto.

Unfortunately, this continuing wave of political violence has a lot to do not only with the corrupt, repressive government that rules Honduras, but also with the United States government. Washington played a major role in consolidating the 2009 military coup and continues to supply tens of millions of dollars of military and security aid annually to the government.

On March 2, Berta Cáceres, the former general coordinator of COPINH and winner of the 2015 Goldman Environmental Prize, was murdered. She had been organizing, with some success, against a number of environmentally destructive projects that proliferated after the 2009 coup. One of them was the Agua Zarca dam, which threatens the environment and rights of the indigenous Lenca community. The movement that she helped organize forced the largest dam producer in the world to pull out of the project, and has halted construction since last year.

A Honduran soldier subsequently told the media that Berta had been targeted by the military for assassination.

The murder of Berta Cáceres provoked so much international outrage that 42 members of the US Congress have cosponsored the Berta Cáceres Human Rights in Honduras Act (HR 5474). It calls for the suspension of all US military and security aid to Honduras so long as the Honduran government fails to protect social activists and so long as the country’s security forces continue to perpetrate human rights violations with impunity, among other conditions.

To the consternation of human rights advocates in Honduras and the US, on September 30, the State Department certified that Honduras had met the human rights conditions attached to their 2016 military and security aid, against all the violent evidence to the contrary. Without this certification, Honduras would have lost half of this aid.

Sen. Patrick J. Leahy (D-Vt.) said that the State Department certification “makes a mockery” of the law and that he could not support release of the funding. “Over the past 25 years, the United States has provided hundreds of millions of dollars in aid to Honduras, with little to show for it,” Leahy said in a statement to The Los Angeles Times. 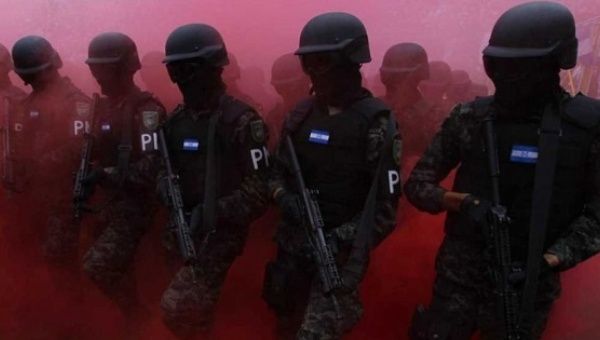 Members of the military police march during a parade commemorating Independence Day of Honduras. Photo: Reuters in TelesurTV

The Berta Cáceres Act probably cannot be passed at this time, in the Republican-controlled Congress. A number of Republican leaders in Congress openly supported the 2009 military coup; the Obama administration nominally opposed it, but took other measures to help the coup succeed. For example, Secretary of State Hillary Clinton wrote in her 2014 book, “Hard Choices,” that she worked to prevent Zelaya, the deposed democratically elected president, from returning to office.

Zelaya had succeeded in preventing the expansion of environmentally destructive megaprojects; he had also presided over an economy that reduced inequality, poverty, and unemployment, and substantially increased the minimum wage, before he was overthrown. Notably, he also was working to resolve claims by campesinos that their land holdings in areas like the Aguan Valley that had been illegally seized by powerful land barons and plantation owners.

Police and COBRA forces attacked a Tegucigalpa Peace March outside the Attorney General’s office, demanding justice following the most recent assassinations, just as OFRANEH who represents the Afro-Indigenous Garifuna people, initiated a drumming and spiritual ceremony.

Eyewitness Karen Spring from the Honduras Solidarity Network reported: “The repression was brutal and I’ve been in a lot of repressive marches since the 2009 coup. This one was up there with the worst, especially since a COPINH member reported that one police took his gun out and fired a shot at his feet. It all happened so fast and no one expected it; there was no time to get children and elderly out. People were grabbing kids and running with them as they were crying and choking from the teargas. The police chased protestors for almost 2 kilometers from the Attorney General’s office.”  — Grahame Russell, Telesur

President Juan Orlando Hernández has refused to meet with Salil Shetty, secretary general of Amnesty International, which condemned the murder of Flores and George. On October 20, Honduran security forces used excessive force to break up a demonstration protesting the mishandling of the Berta Cáceres murder investigation by Honduran authorities. The social movements want the government to identify the higher-ups who are responsible for the assassination, not just the shooters. In another sign that the rule of law does not apply to the murder of indigenous leaders, the file for Cáceres’ case was reported robbed from the prosecutor on September 29.

The terrible human rights situation in Honduras, including environmental destruction of indigenous lands and the ongoing flood of refugees fleeing violence is a natural result of the overthrow of a democratically elected, reform government, and its replacement with repression and militarization. Unfortunately, at the highest levels of the US “national security state,” Honduras is seen as a pawn in a geopolitical Cold War II chess game. It holds one of the US’ few remaining Latin American military bases. And so the numerous calls from almost 100 members of Congress at a time, for a cutoff of military and security aid until the government puts an end to impunity, have mostly fallen on deaf ears.

This will not necessarily change if the Democrats win the Senate on November 8. But in any case there is plenty that Congress can do even now. Individual Senators, for example, on committees such as appropriations and foreign relations, can make it enormously difficult, and maybe impossible, for US security aid to be disbursed to Honduras. This kind of justified obstructionism could put tremendous pressure on the Honduran government to respect human life and rights.

Mark Weisbrot is Co-Director of the Center for Economic and Policy Research in Washington, D.C., and the president of Just Foreign Policy. He is also the author of the new book “Failed: What the ‘Experts’ Got Wrong About the Global Economy” (2015, Oxford University Press). You can subscribe to his columns here.