Planet Ocean: Envisioning Land and Seas as One Ecosystem

“Planet Ocean” — explores how the health of the oceans are the pivot for all of Earth’s healthy ecosystems. This international documentary, directed by Yann Arthus-Bertrand and Michael Pitiot, explores whether it is possible for Earth’s dominant inhabitants to change the way we view our oceans.

“Planet Ocean” – Who Owns the Oceans?

How The Health of The Oceans Are The Pivot For all of Earth’s Healthy Ecosystems
In just over 400 years we have disrupted 4 billion years of interdependent ecosystems. This award-winning documentary, directed by Yann Arthus-Bertrand – the noted environmentalist, journalist, and photographer – pivots around the relationship between the Earth’s oceans and the entire planet’s ecosystem. This film shows how the extinction of one species creates a chain reaction, changing the chemistry and biodiversity in the seas creating global warming, climate change and ocean acidification. How industrial civilization is destroying the world around it. “Planet Ocean” explores whether it is possible for Earth’s dominant inhabitants to change the way we view our oceans. 71% of the planet is made up of water and it is a vital life force for every creature that lives here.

Along the coasts and out in the deep, huge “dead zones” have been multiplying. They are the emptiest places on the planet, where there’s little oxygen and sometimes no life at all, almost entirely restricted to some unicellular organisms like bacteria. Vast blooms of algae—organisms that thrive in more acid (and less alkaline) seawater and are fed by pollution—have already rendered parts of the Baltic Sea pretty much dead. A third of the marine life in that sea, which once fed all of Northern Europe, is gone and may already be beyond hope of recovery.  — Alex Renton, Newsweek

An updated assessment of the Gulf of Maine cod shows the fish spawning at levels lower than seen in data stretching back to the 1930s, scientists say. Records of cod catches dating back to the 19th century indicate the population has never dipped this low before, said Russ Brown, deputy science and research director at the Northeast Fisheries Science Center.  — Patrick Whittle, AP 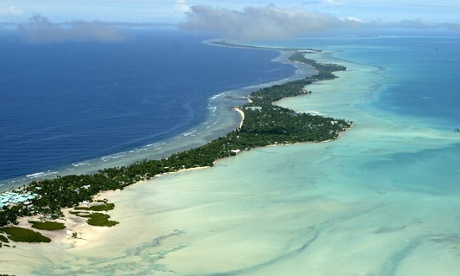 Tarawa atoll, in the central Pacific island nation of Kiribati, due to announce that it will ban commercial fishing in one of the last great tuna grounds left in the world, but fleets still have access to large swathes of seas next to the Phoenix islands Protected Area. Photograph: Richard Vogel/AP

From Christopher Pala, IPS News: Last June 2014, President Obama had proposed to end all fishing in the Exclusive Economic Zones (EEZ) of five remote Pacific islands, effectively doubling the surface of the world’s protected waters. But this September 2014, he only closed the three where little or no fishing goes on, making the measure, according to some experts, largely symbolic: the Wake Atoll, north of the Marshall Islands; Johnson Atoll, southwest of Hawaii; and Jarvis, just south of the Kiribati Line Islands that make up Pacific Remote Islands Marine National Monument.

Fishing of fast-diminishing species like the Pacific bigeye tuna was allowed to continue around Howland and Baker Islands, which abut Kiribati’s 408,000 square km Phoenix Islands Protected Area, and Palmyra Atoll and Kingman Reef in the U.S. Line Islands.