On Haiti and Hurricane Matthew – Intervention and Self-Determination

By
The Outpost
– Posted on October 9, 2016Posted in: Humanity

Haiti now faces an unmitigated human disaster from the destruction of Hurricane Matthew. With extreme reports of death tolls, Dady Cherry examines the misinformation common in mainstream media reports of the destruction that reinforce the gringo-savior mentality, backed by western governments and their compromised and ineffectual non-governmental organizations like the Red Cross. The failures from the 2010 earthquake loom large. News outlets have reported between 80 and 98 percent of structures in the Grand’Anse city of Jérémie were destroyed. Photo by Carlos Garcia, Rawlins/Reuters

Matthew barreled through the Caribbean Sea between Haiti and Cuba and slammed into Haiti as a Category 4 Hurricane during the night of Monday to Tuesday, October 3-4, 2016. The hurricane made its first landfall on the westernmost tip of Haiti, near the town of Tiburon, in the southern peninsula, battering the area with the storm’s fiercest winds, waves, and rains. All of Haiti, however, suffered hurricane-force winds and floods that destroyed crops and swept away much of the livestock. Furthermore, violent surges of seawater crashed into most of Haiti’s cities, which line the coasts. Even the Dominican Republic, on the eastern side of Hispaniola, well away from the hurricane’s center was so strongly affected by floods and winds that it lost four people.

On Tuesday morning, Haiti’s Pwoteksyon Sivil reported five deaths from the Hurricane, together with the circumstances of each death; later the same day, the number rose to 23. To those who had been getting their news directly from Haiti, these low, albeit tragic, casualty rates were not surprising, even for the vulnerable cities of Port-au-Prince and Leogane, which had not been rebuilt after the earthquake and hosted about 55,000 homeless people.

For more than 48 hours before the hurricane, Haiti’s presidential candidates for the now-postponed elections of Sunday, October 9, had tried to outdo each other at informing the public of the dangers of the hurricane and directing people to places of safety. The country’s interim President, Jocelerme Privert, made a televised address in which he admonished the population to move away from the coasts. “My fellow citizens, do not be stubborn, do not say ‘God is good and will take care of you.’ You must evacuate the endangered areas.” He further called on Haitians to help each other. Even prisoners were moved to safety this time. Haitians should take a bow for the lives that were saved by their conduct.

This latest disaster revives unresolved questions that continue to haunt the country from the 2010 earthquake, when international aid groups practically usurped the role of the government. The government has been clear that this time around it will take the lead on coordinating aid, as donors bring in fresh water, food and money. Yet that approach, too, has its limitations.  — New York Times Pilus Enor, mayor of the southern town Camp Perrin, told the Associated Press, “Devastation is everywhere. Every house has lost its roof. All the plantations have been destroyed…This is the first time we see something like this.” Photo Andres Martinez Casares/Reuters

None of this news appeared in the Western press, because it does not deal in facts but in Joseph Goebbels’ poetic truth, which in this case requires the supposed poorest-of-the-poor to perish by the hundreds, if not by the thousands, if they are not helped by foreign humanitarians. Once the United States military and journalists began to assess the hurricane’s damage by some counting system of their own invention, the number of Haitian casualties skyrocketed, and there were no longer any reports of how the dead met their fates. Indeed, the number of the Haitian dead from Hurricane Matthew has doubled approximately every 12 hours since Tuesday morning and is now estimated to be 800. At this rate, all of Haiti’s population should be dead in about a week.

All joking aside, these casualty counts should be examined carefully and with great skepticism. For one, there no longer appears to be a distinction between the missing and the dead. For example, the children from a collapsed orphanage are presumed to have died, but no evidence of their deaths has been offered. Such disappearances of children during disasters are often due to human trafficking, and the irresponsible reporters who eagerly repeat these numbers should consider that they might be serving as the unwitting accomplices of criminals. The new numbers of the dead are blamed on the recently discovered damage to Haiti’s southwestern peninsula (Grand’Anse, South and Nippes departments), which had been cut off from the rest of the country due to the collapse of a bridge on Route National No. 2 in the city of Petit Goave.

[T]he Haiti Reconstruction Fund—a fund established in 2010 and managed by the World Bank on behalf of various donor countries—disbursed this year through 30 June just $16.7m out of a total of $351m for disaster relief purposes. One of the reasons why only a tiny fraction of that money has been used is that most of the money is meant to be used for earthquake reconstruction.  — Jocelyn McCalla, National Coalition for Haitian Rights After surveying all the country, the Pwoteksyon Sivil revised its counts for Haiti’s various departments (states) on Thursday, October 6, to a disastrous 108 deaths: 38 deaths in Grand’Anse; 26 in the South; 34 in the West; 1 in the Northwest; 3 in the Artibonite; 3 in Nippes; and 3 in the Southwest. These new counts by Haitians, where the number of deaths in the Grand’Anse and South departments are similar to those of the West department, imply casualty rates more than 10 times higher for Grand’Anse and more than 5 times higher for the South than for the West. This rings truer than the inflated numbers from the English-language media. One would not necessarily expect the Grand’Anse and the South alone to have almost 800 casualties simply because they were hit hardest by the storm. First, these areas have not suffered any earthquake damage. Secondly, they lacked a significant population of internally displaced people. Finally, the Grand’Anse and South departments, in Haiti’s southwest, have only 5 and 8 percent, respectively, of Haiti’s population, compared to the West department, which includes the capital city of Port-au-Prince with more than 40 percent of the population.

From what one can gather of the reports from the Miami Herald, Reuters, New York Times, The Guardian, and especially the BBC News, they appear to be on a campaign to rehabilitate the non-governmental organizations (NGO) that have been discredited by their conduct after Haiti’s earthquake of 2010. The fear that these NGOs might return has been described by journalist Kim Ives. The United Nations occupying force, which has twice introduced cholera in Haiti, is predicting yet more cholera. The UN is scheduled to leave the country in six months. Nevertheless it is casting itself as an expert on the eradication of cholera epidemics, promoting useless cholera vaccines through articles sponsored by the Bill & Melinda Gates Foundation in newspapers like The Guardian, and plotting to stay. At this juncture, it is absolutely critical for the Haitian government to take charge of all emergency water distribution and make sure the water is safe to drink. After all, if you control the water that people drink, you control cholera, and there is far too much money to be made in a massive cholera epidemic. The Red Cross, which has never showed much for the nearly $500 million in donations it collected within a year of the earthquake, is again promising relief to Haitians. This charity claimed that it spent about 5 percent of its earthquake funds on 700 homes, which turned out to be only a scandalous 6 houses on closer inspection. To account for the rest of the money, it has made vague claims of building more than 100,000 shelters, signing agreements to spend about one half of its funds, giving away tens of millions of dollars worth of food, and helping more than 4.5 million Haitians, nearly one half of the entire population, get back on their feet. How? By giving them golden slippers?

Evidently it does not trouble some news agencies that none of the Red Cross’ claims is demonstrable. A BBC report on Friday, October 7, which trumpeted that 800 Haitians had died from Hurricane Matthew, turned out to be a carrier for a thinly wrapped call for donations to the Red Cross. “The Red Cross has launched an emergency appeal for $6.9m (£5.6m) ‘to provide medical, shelter, water and sanitation assistance to 50,000 people,’” the article announced. The Miami Herald, for its part, reported 300 deaths and informed its readers: “Obama, in his remarks on Haiti Friday, also asked Americans to help by contributing to the Red Cross and other philanthropic organizations.” Even after keeping its manager and CEO in six-figure salaries for years, the Red Cross should still have more than enough in its interest-bearing accounts to assist the victims of Hurricane Matthew. Give it nothing.

On October 4, Haiti’s Interim Prime Minister, Enex Jean Charles called for all aid to the country from any donor or partner, national or international, to be channeled through the Permanent National Office for Risk and Disaster Relief (Secrétariat Permanent National de Gestion des Risques et des Désastres, SNGRD). It is almost certain that the next elected government will make a similar call. Hang on to your wallets. Give nothing to any organization until it makes clear that it will abide by the wishes of Haitians.

In lieu of sending money to organizations with a dubious history in Haiti, those wanting to contribute to relief efforts were encouraged to support Haitian-led grassroots organizations like Konbit Sole Leve and Sakala, which have been providing emergency assistance and shelter.  — Common Dreams 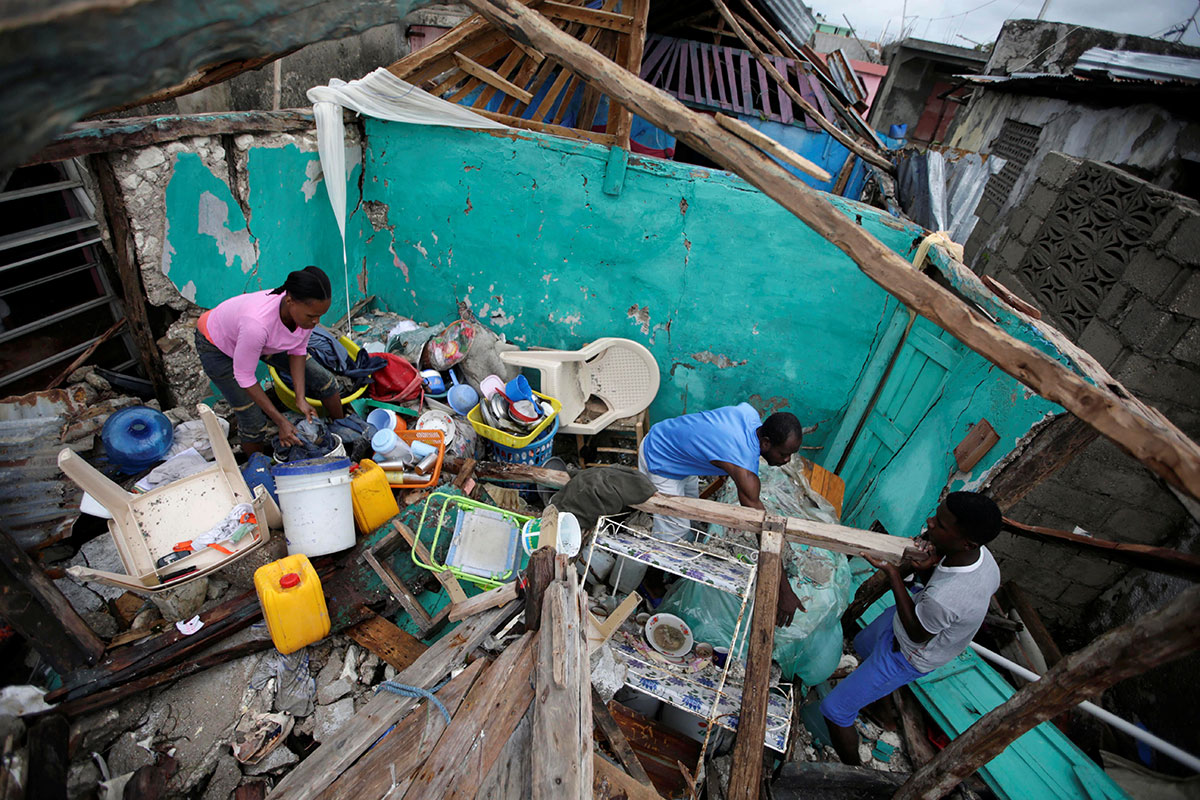 The Western press, which so relishes the sight of dead and disconsolate Haitians, has so far thankfully offered us nothing of this, except for aerial images of the physical devastation of southwest Haiti and one highly republished photograph of two men carrying a coffin. Where are all the dead Haitians? Were they mostly hit by falling trees and flying roof tiles, overwhelmed by mudslides, drowned in their homes, or swept to sea on giant waves or along streets that had turned into rapids?

To my knowledge, Cuba is the only country that reports the circumstances of the deaths of all its hurricane casualties, together with their names, gender, and age. It is no doubt this systematic collection of correct information about hurricane deaths that has made Cuba the safest place to be during such storms. Accurate hurricane statistics also help to identify irregularities and protect the vulnerable from criminal elements. But more than anything, the naming of the dead, the refusal to let people die as nameless as livestock, is a necessary show of respect.

Dady Chery is the author of We Have Dared to Be Free: Haiti’s Struggle Against Occupation.