Traditional Goolarabooloo and Jabirr Jabirr land custodians from the Kimberley, Western Australia, voiced concerns in 2011 about the proposed $30 billion liquefied natural gas (LNG) project at Walmadan or James Price Point. They say turning their coast into a gas hub will have devastating impacts on wildlife and nearby communities. The onshore project was abandoned by the joint venture after Australia’s rising costs made the project unviable. This project is now to be developed as a floating LNG facility with minimal construction work to be undertaken in Australia Traditional Custodians Speak Out Against Gas Hub in The Kimberley

Neil Mackenzie, a traditional owner from Broome and co-chair of the Save the Kimberley group, said he’s worried the project will destroy local culture and livelihoods. “It is almost the last outback wilderness area in the world. What we have there is very precious,” he said. “There are a lot of communities out there that depend on ecotourism and keeping the country the way it is,” he said.

Produced by Paul Bell (feral films) this video is a must see for anyone who wants to understand the community effort to stop the proposed Gas Hub at James Price Point.

The LNG project from company Woodside would have included building eight pipelines (natural gas and oil) to the shore at James Price Point, eight huge LNG tanks (LPG storage and oil), a 2km jetty, a construction camp to house 8000 workers, as well as clearing 2500 hectares of coastal bushland. A total of 2700 tanker movements are expected per year. During a period in 2011, anti-gas hub protesters blockaded the proposed site, about 60km from Broome, to stop Woodside carrying out geotechnical studies. So far at least 25 arrests have been made. An aerial view of James Price Point in West Australia. Image from The Courier

With a promise that there will be no more LNG development along the Kimberley coast without permission, Traditional Land Owners agreed (60 to 40 percent) to hand over their Native Title on Goolarabooloo and Jabirr Jabirr country giving Woodside’s gas hub the go ahead. The owners, however, say they were forced into making the deal, threatened with compulsory acquisition from the State Government. The fight will go on to the Supreme Court.

The Kimberley coastline stretches 1200 kilometres with little human occupation. It is the breeding and calving ground to the largest group of humpback whales in the world. It has no recorded extinctions. It contains the world’s most ancient and extensive rock art galleries. North of the Kimberley, the Browse Basin has huge gas reserves worth billions. China & Japan want it now.

The Kimberley is one of the nine regions of Western Australia. It is located in the northern part, bordered on the west by the Indian Ocean, on the north by the Timor Sea, on the south by the Great Sandy and Tanami Deserts, and on the east by the Northern Territory.The hub project is planned near Broome.

A major industrial complex on the Kimberley coast would compromise the sustainable economic future of the Kimberley (tourism, well managed fisheries etc.) and would act as a ‘thin edge of the wedge’ to trigger many other damaging developments such as strip mining for bauxite and alumina refineries, and polluting fertilizer or ammonia plants.

There are numerous registered Aboriginal Heritage Sites in the vicinity including burial and mythological areas. The region is part of an Indigenous Song-Cycle, a continuous dreaming track that incorporates the Lurujarri Heritage Trail running from Cape Levenque to south of Broome.

The Goolarabooloo people invite you to walk with them where their ancestors walked. The Lurujarri Heritage Trail is an annual event run by traditional owners, to walk their dreaming trail.

There are three main alternatives to the destruction of the Kimberley coast:

1. Leave the gas in the ground (seabed) – In a world increasingly aware of the realities of climate change and human-induced global warning, the argument can be made that new fossil fuel extraction is not required and money would be better invested in adopting renewable energy technologies – and creating thousands of jobs in the process.

2. Process the gas in the Pilbara – The Pilbara region already has the established industrial facilities that would suit this kind of development: industrial-zoned land, existing roads and power supply, and workers facilities are already in place.

Additionally the large number of LNG processing facilities already operating or planned for the Pilbara (to the South of the Kimberley) mean that skilled labor shortages are predicted and LNG oversupply may become an issue. Many companies with a stake in Browse gas have expressed interest in ‘back-filling’ existing Pilbara facilities with Browse gas as other closer sources of gas dwindle over coming years.

3. Process the gas using floating LNG technology – The floating LNG processing technology is in its infancy, but Shell announced this is the preferred processing option for it’s wholly owned Browse gas reserves. Woodside too has said it is looking at floating LNG as an option for its massive Sunrise project near East Timor. Floating LNG has its own massive threats to ecosystems from construction, operation and potential mishap and is not recommended. According to Australian Greens, construction of the port facilities, including the dredging and blasting of reefs and seabed, is expected to result in a 50 square kilometers (19 sq mi) “marine deadzone.”

The involvement by the Australian Greens has been heavily criticized by Jabirr elder Rita Augustine, representing the Environmental and Cultural Heritage Team and Jabirrlabirr Traditional Owners, who wrote an open letter to Mr Bob Brown in August 2012. Mrs Augustine’s criticism included comments such as: “The only thing we need saving from is people who disrespect our decisions and want to see our people locked up in a wilderness and treated as museum pieces”; and “what saddens me most is your complete disregard for Aboriginal people. I know you care about the whales and the dinosaur footprints, but what about people?”

According to a newspaper report, quoting a single scientist, construction is also expected to irreparably damage a large number of fossils unique to the area, including the only example of dinosaur footprint extant in Western Australia. 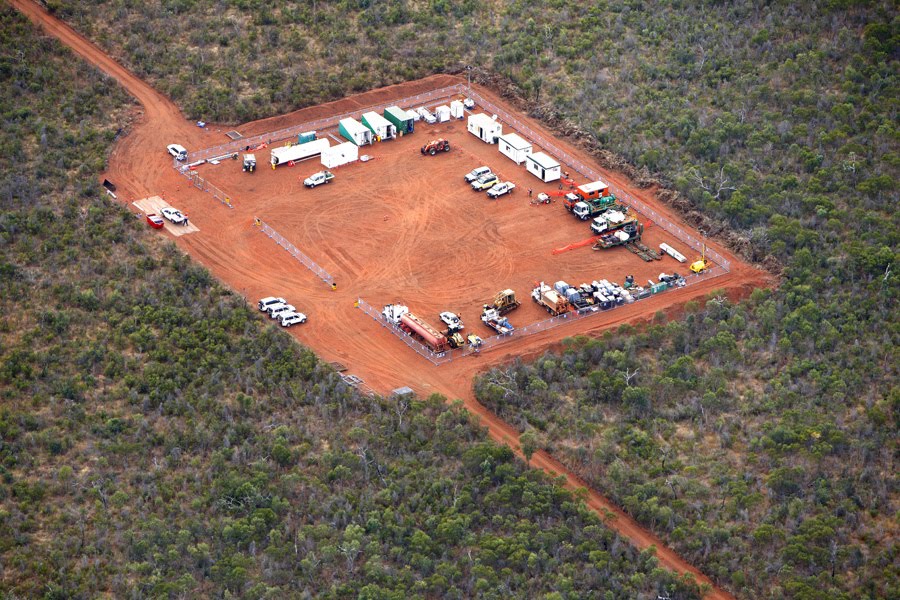