By
Jack Eidt
– Posted on October 31, 2011Posted in: Rituals and Traditions 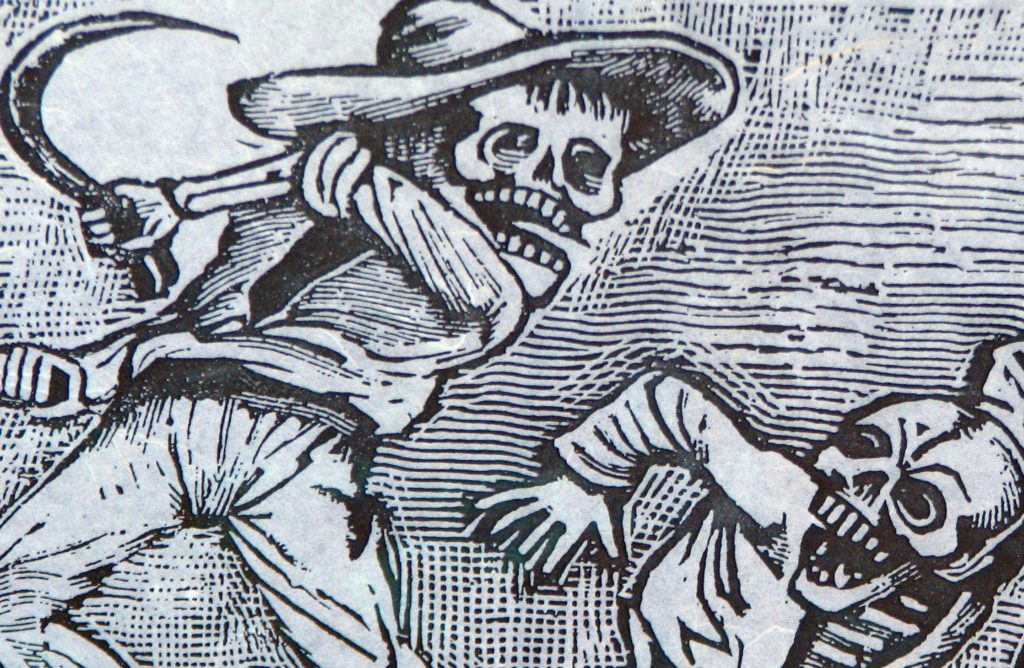 José Guadalupe Posada (1851–1913) was a Mexican illustrator known for his satirical and politically acute calaveras (skull illustrations) deeply embedded into the cultural context of the Mexican Revolution (1910-20), which led to a new appreciation of the indigenous past.

Day of the Dead (Día de los Muertos) is yearly celebrated in Mexico and many other countries during the last days of October through the first week of November.  A time to communicate with the ancestors, it honors the death-transition from one life to another.  Blending the Roman Catholic All Saints’ Day (November 1st) and All Souls’ Day (November 2nd) with pre-Hispanic Meso-American indigenous Nahua traditions (Aztecs, Toltecas, Tlaxcaltec, Chichimec, Tecpanec as well as the non-Nahua Maya) death becomes a colorful dance, where souls never die, they rest in Mictlan.

Pre-Spaniard, this celebration took place in August, an Aztec festival dedicated to a goddess called Mictecacihuatl.

STORY: Day of the Dead Calaveras and Walking Altars Ofrendas or offerings might include orange marigolds to attract the souls, toys bought for departed children, bottles of tequila, candies, pan de muerto, and sugar skulls with the deceased named written on the forehead for nourishment, altars with candles, Christian crosses, and pictures of deceased relatives. People paint on or wear wooden skull masks called calacas. Aztec and other calaveras or skeletons can also be Day of the Dead poems written to make fun of the living. 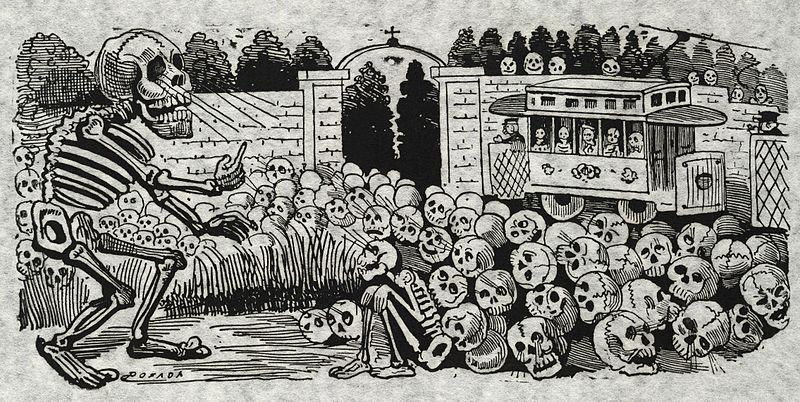 José Guadalupe Posada was best known for his calaveras assuming different disguises, satirizing life among the privileged classes during the reign of Porfirio Díaz just prior to the 1910 revolution. Here is shown the famous “Calavera Electrica.”

José Guadalupe Posada (1851–1913) was a Mexican illustrator known for his satirical and politically acute calaveras. Deriving from the Spanish word for ‘skulls’, these calaveras were illustrations featuring skeletons which would, after Posada’s death, become associated with the Mexican holiday Día de los Muertos, the Day of the Dead. Most of these calaveras were published by the press of Antonio Vanegas Arroyo which produced inexpensive literature for the general public, including thousands of satirical revolutionary broadsides illustrated by Posada. Through this focus on mortality, Vanegas Arroyo and Posada satirized many poignant issues of the day, in particular the details of bourgeois life and the dictatorship of Porfirio Díaz.