Chumash Legend: Hole in the Blanket

By
Jack Eidt
– Posted on May 2, 2011Posted in: Myth, Rituals and Traditions

The world covered in a blanket of darkness in this retelling of a Chumash story retold by Paul Perrotta, the rock, plant, and animal people found through cooperation and council to give thanks for the goodness of Mother Earth and Grandfather Sun, and let the light shine down. Chumash stories from the heart of the wilderness, where the rocks, the plants and the animals were the people of the world. Photo By Jack Eidt.

The Hole in the Blanket

They say that before the appearance of two leggeds, the rocks, plants and animals were the people of the world. They even talked like people.

The world was a harmonious place in those early days of creation. Each morning when people woke they would consider their good fortune and say “Thank you.” They would stop to admire Grandfather Sun rise in the morning, giving appreciation for another day of living and loving. They went about offering the gifts they had been given, helping each other.

They respected each other’s differences, and learned from them. They only took from the Mother Earth on an as needed basis, never wasting anything. People always stopped to watch Grandfather Sun go to bed and were grateful when Grandmother Moon arrived to shine her soft moonbeams upon them. Each night, before sleep, they would count their blessings again, and say “Thank you.” Those early days of peaceful world coexistence lasted many, many moons.

Then one day, no one knows when, the people started to forget. Upon rising in the morning, busy-ness seized their day; they would forget to greet Grandfather Sun and to offer any appreciation. The people became jealous of each other, thinking others possessed more than them, greed overtaking their hearts. They began to disrespect the Mother Earth. Instead of taking only what they needed, they consumed and sold all they could get. Short of cooperation with their neighbors, they thought only of helping themselves. The people got so busy doing things they failed to notice Grandfather Sun going to bed, and forgot about Grandmother Moon entirely. People separated into their own tribes, and before long, fought among themselves. They separated more and more, arguing, hating, and hurting each other. The Creator had been watching and said “Enough,” throwing a blanket over the whole world. Now the world was in darkness, people frightened. The plant nations withered and clean waters ceased flowing. The people were cold, hungry, afraid. Each of the tribes did what they could to remove the blanket. None of the stone people or the tree people were tall enough. The swimmers would paddle fast and leap from the water, but none came close to the blanket. The four leggeds ran and jumped and climbed, without success. Even the flyers could not reach the blanket.

It was decided that all the tribes would come together in council and devise a plan to remove the blanket. The great council day arrived, all tribes present. Members went into circle, recounting failed efforts to reach the blanket. Even the Eagle, flying highest and closest to Great Spirit, came nowhere near. People, sad, hopeless, and more afraid than ever, in unison asked for help. Some kneeled down to the Mother Earth. Others raised arms toward the Father Sky and Great Spirit. All at once, people prayed, and a little messenger appeared center circle. It was Hummingbird. Some snickered, thinking, “What can this puny little bird have that can help?” 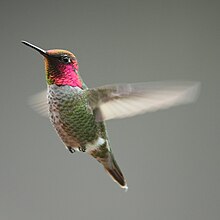 The messenger of sweetness, Anna’s Hummingbird – Photo By Alan Vernon

Yet in the council, everyone is allowed to speak, and Hummingbird said, “I have an idea. I can get on top of Crow, and Crow leaps onto Owl, and Owl can stand on Eagle. Then Eagle can fly as high as he can, then Owl continues until she is tired. Then Crow will keep going. When he slows I will take off, and fly as high as I can. Maybe in this way we will reach the blanket.”

The people considered this a good idea, giving them hope, which inspired them to remember. They recalled the importance of everyone, all offering their own special medicine, and even the smallest things can bring great gifts. The bird tribes agreed to give it a try. Hummer was on top of Crow, who stood over Owl, talons gripping Eagle’s head. Eagle launched, flying higher than ever, until he could fly no more. Then Owl took off and when tiring, Crow continued the climb. Crow flapped higher still, wings iceing, and when reaching his ability, Hummingbird took off. Hummer flew straight up, as fast as she could. She made it to the blanket and her beak went through the blanket and got stuck.

Hummingbird just hung there for a while, resting. Then she shook herself loose and fell back to earth. The people saw the point of light where Hummingbird had pierced the blanket and were grateful. The people remembered more, they started working together, considering help and cooperation. All the bird tribes teamed up and hummingbirds kept piercing the blanket. The rest of the tribes helped in preparing food and getting water, and finally, one day, Hummingbird made it all the way through the blanket.

The Creator saw this and said, “This is the way the people should be living. Honor has been restored to the Creation,” and Creator removed the blanket from the world. Once again, the world was peaceful, happy place. The people said, “Thank you” every morning, and spent their days thinking of how they could help each other. They enjoyed each other’s differences, and respected the Mother Earth. The people always remembered to stop and say “Good night” to Grandfather Sun, saying “Thank you” again, each night before sleep.

The world was a wonderful place once again, and it was this way for many, many moons. Then, one day, no one knows when, the people again started to forget…

Each month, when the moon is full, we see the hole in the blanket and are reminded that it’s important to respect each other, to work together, to help each other, and that each one has their own special medicine to offer the world, including…..you!

Ageless wisdom of the Chumash ancestors, embellished and offered with love, from Paul Perrotta, edited by Jack Eidt.