After seven years of study, federal officials have recommended a $453-million plan that would restore an 11-mile stretch of the Los Angeles River but leave much of its banks steep and hard to reach. Advocates continue to press for a more ambitious alternative that would bring more people to the river, improving parks and recreation as well as ecosystems. Comments on the Army Corps Study can be emailed to [email protected] until November 18, 5 p.m. After eight years of study, the Army Corps of Engineers has released its proposal to restore 11 miles of the LA River between Griffith Park and Downtown. The report considers four options, each with the goal of getting the river flowing again, “reestablishing riparian strand, freshwater marsh, and aquatic habitat communities and reconnecting the River to major tributaries,” while maintaining the river’s role in flood control and providing recreational opportunities. Rendering of Taylor Yard from City of Los Angeles.

The US Army Corps of Engineers has selected an alternative for advancing the much touted restoration of the Los Angeles River. As part of the Los Angeles River Ecosystem Feasibility Study (or the ARBOR Study — Alternative with Restoration Benefits and Opportunities for Revitalization), the tentative plan selected, known as Alternative 13, is the second-cheapest of four options detailed in a much-anticipated feasibility study released on September 13.

The project would increase habitat by 104 percent, restoring 588 acres along several key points of the river from Griffith Park to downtown. It would restore a historic wash at Piggyback Yard near Union Station; remove concrete from the river bottom at its confluence with the Arroyo Seco, a major tributary; widen the river by 300 feet to form a freshwater marsh in an area known as Taylor Yard, near Glassell Park; and add a side channel behind Ferraro Fields.

We can learn much about urban rivers everywhere from the story of the Los Angeles River. From its role in the settlement of a city and its importance as a water source to its ultimate transformation and potential renewal, its larger history mirrors the story of urban rivers the world over.  — Blake Gumprecht in “The Los Angeles River, It’s Life, Death, and Possible Rebirth”

The alternatives outlined in the report would cost between $375 million and $1.08 billion and restore the river’s natural ecosystems without weakening its ability to control floods. The other alternatives include:

The 51-mile waterway has been maligned since the federal government lined much of it with concrete to serve as a flood-control channel starting in the 1930s. Today’s Army Corps plans to atone for its ecological sins, but it always comes to the question of money. River advocates want to see a more ambitious program that would integrate public recreation with the ecological restoration. Omar Brownson, executive director of the L.A. River Revitalization Corp., a nonprofit created by the city of Los Angeles, said: “When we look back a generation from now, that’s going to be one of the ways we reimagine the river and recognize that this isn’t just a flood-control channel, it’s a vital part of our city.”

The Los Angeles City Council in August adopted a resolution endorsing Alternative 20 as the one “that results in the most expansive ecosystem restoration.” Additionally, community organizations have announced a Los Angeles River Rally to be held at L.A. State Historic Park on Saturday, September 28 at 12 noon.

“California lags far behind the rest of our nation in Army Corps-sponsored river restoration efforts. This is our only opportunity to get the best river restoration plan possible for the Los Angeles River. It’s time for all Angelenos to rally around our cry: We want our RIVER…and we want it right now!” said Meredith McKenzie of the Urban Rivers Institute in a statement. A river maligned with concrete, laden with possibilities for ecosystem regeneration and public recreation. Photo By Zack Behrens in KCET

Under Alternative 13 endorsed by the Army Corps, the federal government would foot just over 30% of the bill, with the city of Los Angeles funding the rest, including the acquisition of valuable land. The Army Corps said it first evaluates ecological benefits because restoring natural systems is its primary mission. The cost estimates do not include additional spending for recreation, which is evaluated later and could add $6 million to the cost of the agency’s preferred plan. Some of the other alternatives would require the federal government to provide a greater share of the money.

The river
is a rigorous mistress,
but when you tickle her
with your deeds, you can hear laughter
from beneath her concrete corset.
Lewis MacAdams

A History of Abuse and Rebirth

The Los Angeles River was naturally an ephemeral, braided stream that would remain dry for months, only to rush with water during storms. In the chaparral ecosystem, rivers are the fount of life, where willows and sycamores sprout, water fowl come to float and dine, and roving coyotes and mountain lions replenished themselves. A river in transition, looking north from the Glendale-Hyperion Bridge in 1937, the mad rush to control the wild flow to protect land investment as well as open up further lands for subdivisions downriver factored into the scheme to channelize the river bottom. Image from LA Public Library.

The needs of real estate superseded what was once sustenance for a young agricultural pueblo covered in vineyards and orchards. That attraction to water flowing into desert gardens encouraged residential development of the river’s bottomlands. Predictable catastrophic floods in the late 19th and early 20th century led the federal government to encase much of the waterway in concrete and straighten its course from the San Fernando Valley to Long Beach, a project that was completed in the late 1950s.

Decades later, there were calls to restore the river as much-needed habitat and open space. Los Angeles County completed a master restoration plan in 1996, calling for bikeways and parks. In 2007 Los Angeles produced its own blueprint for revitalizing the river ecosystem and providing green space in the heart of the city. In 2010 the U.S. Environmental Protection Agency declared the L.A. River a “navigable” waterway under the federal Clean Water Act; it is now legal to kayak down a stretch of it.

Then Great Spirit made trees and lakes and rivers on the back of six giant turtles. When he was finished, he looked at the beautiful land he had made. Great Spirit was very pleased. But soon trouble came. The giant turtles grew restless. They wanted to leave. — From a Gabrielino-Tongva Folktale 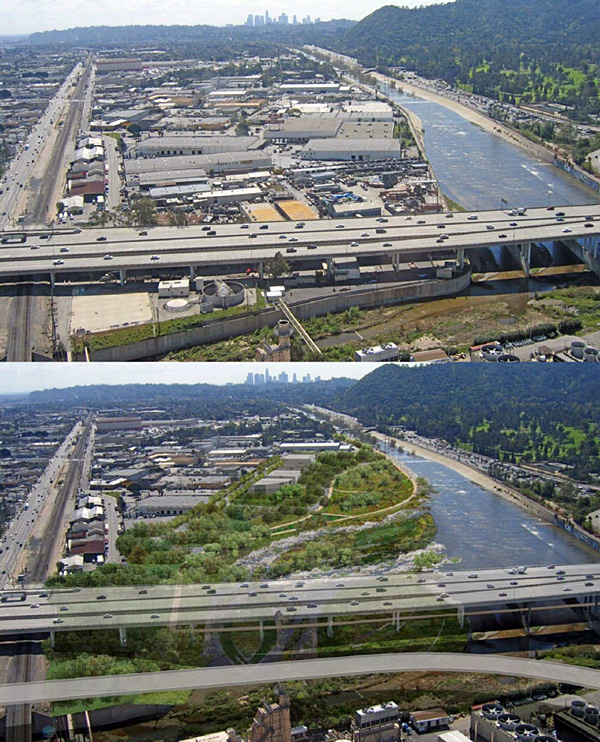 The evolution of the river can tell us much about greater Los Angeles as it parallels the city’s growth from village, to city, to metropolis. By reclaiming our past abuses of the river, we provide habitat for the wild and domesticated among us and evolve into a fuller stage of humanity. Verdugo Wash Before and After from the city preferred Alternative 20. Image from USACE in KCET.

The full ARBOR report can be read here. Details on the River Rally are available here. The public meeting will be held October 17, 5:30 to 7:30 pm at the Los Angeles River Center on 570 West Avenue 26, Los Angeles. Comments can be emailed to [email protected] from September 20 until November 18, 5 p.m. After a 45-day public comment period, the Army Corps will make its final recommendation. The project then has to be authorized and funded by Congress, another lengthy process that puts construction years into the future.