Takeaways from a recent Green Festival Expo discussion on the Los Angeles River Revitalization include that the job of planning for water resiliency belongs to all of us, not Frank Gehry regardless of his recent charge, and we must also consider how public access, parkland, ecosystem restoration, cargo and passenger rail, bicycle greenways, and anti-gentrification environmental justice will fit into the mix. Collaboration is the key.

Gehry, Hydrology, and the Misplaced Role of Savior

As we pondered at the Green Festival Expo 2015 panel discussion on the L.A. River Revitalization, confusion, ennui, and ire rule the word on starchitect Frank Gehry and his band of saviors stepping in, courtesy of the LA River Revitalization Corporation (LARRC), to rescue our river. Should we really be asking, “What can we all do to heal our broken relationship with water and watersheds in this arid megalopolis in the desert, facing an ongoing water supply crisis, with no end in sight?”

Melanie Winter, founder of The River Project, made clear from her perspective that we must take matters into our own hands, rather than wait for the cavalry, led by concrete-centric post-modern modernist architects, gentrification-inspired real estate developers, and a not-publicly-accountable non-profit.

Lorcan O’Herlihy Architects (LOHA) has designed a speculative system of interventions for the Los Angeles River that “examines the relationship between urbanization and water use to develop new models of densification that recognize and tap into existing ecological and infrastructural patterns.” Called WATERshed. Axonometric view of the Elysian Valley, from ArchDaily.

In particular, Hadley Arnold of the Arid Lands Institute wrote a measured response to a fawning L.A. Times Op/Ed on the Gehry-LARRC efforts. She stressed, as opposed to one River plan with some aquifer recharge components, the answer to the water resiliency question calls for a watershed-level approach: “Capturing stormwater flows and directing them to appropriate aquifer recharge sites, reducing the burden of flooding on the River while augmenting local supplies in areas not prone to liquefaction or contamination spread, needs to happen off-river, distributed across the 865-square-mile basin.”

Thus, instead of hashtagging #DontGehryOurRiver, maybe we should be replacing lawns with xeriscaped California natives fed with runoff-collecting bioswales, repave the driveway with permeable concrete, install a graywater reuse system, and cover the home in a sponge-like membrane that captures storm water and collects it. Bike Path as Gentrification? Greenway 2020 envisions the incorporation of recreational trails along all 51 miles of the river. The LA River Revitalization Corporation–building on years of work by FoLAR–will improve the existing 26 miles of riverside paths and work to turn the remaining 25 miles of publicly-owned land into “pedestrian and bike-friendly paths with bike shops, kayak rentals, and eateries along the way.” This could include a controversial in-channel bike path to connect from Chinatown through downtown to Maywood, where the trail heads to Long Beach. Image LARRC

“What new landscapes, architectures and urbanisms will arise, on the River and off, when we treat every drop of rainwater, graywater, and wastewater as supply?”  — Hadley Arnold, Arid Lands Institute 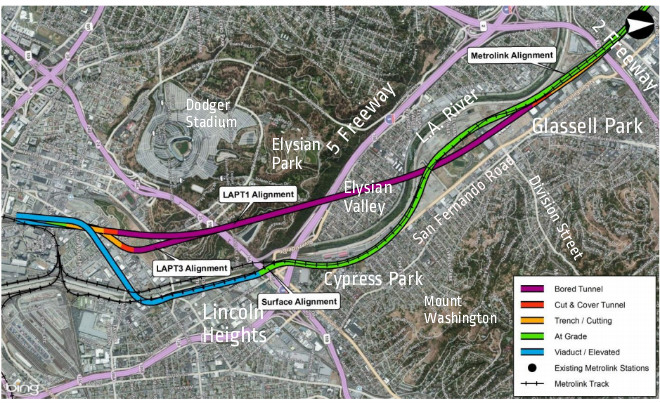 Mobility Question: Proposed routes for the bullet train between Union Station and 2 Freeway would impact the River. Trains would either pass through a tunnel (pictured in purple) bored under Elysian Park and Elysian Valley before emerging at Taylor Yard Bowtie State Park, or along an elevated track (shown in blue) passing through Chinatown and then along the Lincoln Heights side of the L.A. River on the ground or in a partially covered trench (pictured in green) paralleling the Metrolink tracks. Plans to rethink Union Station could also create opportunities to integrate/move/trench existing tracks, freeing land for open space.

On the issue of the Los Angeles River itself, the modus operandi should be an epic community collaboration to overcome epic challenges. Yes, Lewis MacAdams and the Friends of the Los Angeles River (FoLAR) began the monumental push for the City of L.A. and a multiplicity of entities to come together and dream. Thus, the U.S. Army Corps of Engineers acceded to a $1.35 billion remaking of the 11-mile stretch of said river’s trip from Griffith Park through downtown.

Now an impressive array of advocates have appeared on the landscape who must be heard by any entity tackling the entire 51-mile vision. Here’s to the coming together of bicyclists, hikers, kayakers, engineers, hydrologists, biologists, urban planners, designers, land developers, corporate financiers, railroads, politicians, public agencies, writers, non profits, community advocates, and you.

As Arthur Golding, architect and board member of the Council for Watershed Health, noted in our panel, guided by the many plans already worked out with the public (Cornfield Arroyo Seco Specific Plan, Northeast LA Vision Plan, One Water LA), using the Los Angeles River Improvement Overlay (LA-RIO) District and Enhanced Infrastructure Financing Districts (replacement for redevelopment districts), greening can be encouraged while protecting neighborhood integrity.

The multiple epicenters of challenge reveal themselves through it’s different revitalized  faces (to name just a few): in addition to the River as one component of water resiliency, add River as multi-modal transportation corridor and River as community-gentrifier. Access Constraint: About 34% of regional economy is based on goods movement from the LA and Long Beach Ports, located at the mouth of the river. Cargo traffic is expected to triple by 2035, including shipping extreme crude oil in “bomb trains,” volatile fracked North Dakota Bakken shale and toxic and corrosive tar sands from Alberta, Canada. Good that LA recently voted to unanimously oppose Phillip 66’s move to expand their Central Coast refinery to include oil trains, some that would pass along the river.

Re-envisioning the River will create a publicly-accessible open space, recreation and park amenity for the region. The revitalization promises to restore an ecological asset, including critical wildlife and plant habitat, and provide a component of runoff capture and storage. It further will enliven and connect with some of Los Angeles County’s most culturally rich and distinct neighborhoods.

The River further provides a non-vehicular, multi-modal transportation corridor through downtown and the region, whose growth will both conflict and complement the open space, ecology and community connection goals. Yet, this aspect of River as corridor remains vital to the city’s future resiliency and sustainability.

The revitalization endeavors as well to foster economic development and enhance property values for surrounding communities. This will further exacerbate an endemic shortage of affordable housing, thus pushing out communities of color and working poor already at-risk for social and economic survival. So, finally, the River revitalization must redress historic and incidental environmental and social injustices. Collaboration: Historic Sixth Street Viaduct east of downtown with a new multi-modal bridge. Engineering firm HNTB, in collaboration with Michael Maltzan Architecture, has been working with the City of Los Angeles, Bureau of Engineering and the California Department of Transportation (Caltrans) to finalize the design of the more than $400 million viaduct. Due to be constructed by the end of 2018, the bridge is being designed to provide access to public open space on both sides of the river and to connect to the proposed in-channel bike-path. Image Michael Maltzan.

How can we accomplish this? Coordination among stakeholders, no matter how difficult, to work out a myriad of plans/community tools/demonstration projects/policy initiatives/prototypes, not just one, but hundreds of which have their own goals and long-term visions to empower people to get involved in shaping their city’s fluvial destiny.

Can it work? With never enough funding, with endless amounts of impervious concrete and an ill-informed, apathetic public, with neighborhoods all over the Central City gentrifying fast under the pressure of a population looking to escape their suburban car-centric purgatory, nothing will be easy. But speaking up, and listening to each other, especially in the face of famously authoritarian designers, will most definitely make a difference.