Beasts of the Southern Wild: Bayou Culture Sinking into the Gulf – By Jack Eidt

“Beasts,” a hard-knock ecological fairy tale about the disappearing Louisiana bayou coastline, highlights the fragility of the region’s hurricane defenses and the resulting devastation of communities and cultures living on the flooding margins. The Beast filmmakers used as their topographic setting Isle de Jean Charles, a narrow island deep in the bayous of South Louisiana. The isle, emblematic for a sinking community, has only few dozen families left, most of whom are members of the Biloxi, Chitimacha Confederation of Muskogees (BCCM), a not federally recognized indigenous group. Residents live in houses on stilts to protect themselves, and their way of life, from flooding into oblivion.

Hurricane Isaac and the film, Beasts of the Southern Wild, have reopened the post-Hurricane-Katrina discussion on the disappearing Louisiana bayou coastline, the fragility of the region’s hurricane defenses and the resulting devastation of communities and cultures living on the flooding margins. In the last 100 years, Louisiana has lost 1,900 square miles of coast, including barrier islands and protective fringe of marshes. That means a swath of land the size of Manhattan has been swallowed by the sea on average each year. Help may be on the way, however, with the recent advancement of the 2012 Louisiana Coastal Master Plan along with potential funding sources from the BP oil spill from the RESTORE Act. 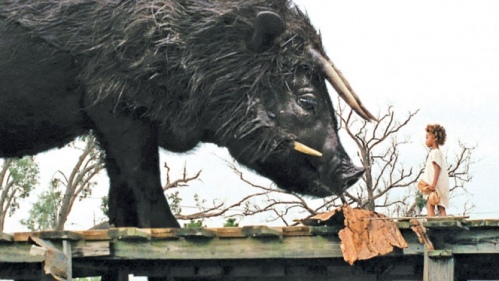 On the verge of extinction: the mythical aurochs and the southern wild bayou.

The tale of girlhood imagination touched with magic, directed by Benh Zeitlin and co-written by Lucy Alibar based on her play “Juicy And Delicious,” dramatizes the struggle with poverty and alcoholism amid fragmented a mosquito-bitten bayou village in the shadow of the oil refineries. The film follows young Hushpuppy (Quvenzhané Wallis) and her ailing father Wink (Dwight Henry) surviving on the “wrong side of the levee,” an ethnic melange of hard-drinking locals clinging to dilapidated shacks set on a verdant strip of southern Cajun-Creole wild they affectionately call “The Bathtub.”

Flood waters from Hurricane Isaac topped a privately-owned levee in Braithwaite, Plaquemines Parish, 19 miles southeast of New Orleans. Not included in the 200-mile perimeter of federally-built levees, the community filled to the rooftops and forced a deliberate breach to drain the water. Why are some communities protected and others left to drown? Life and art inextricably intertwined…

Coastal Louisiana sits at the end of a natural funnel that drains 41% of the coterminous United States and parts of two provinces of Canada. This watershed, the Mississippi River basin, flows into the Gulf of Mexico through the Mississippi and Atchafalaya Rivers. Periodic flooding limited salt water intrusion and added fertile sediments to coastal basins. These river and coastal processes built and sustained an extensive wetland ecosystem, the eighth largest delta in the world. In addition to providing nurseries for catfish, crawfish, shrimp, alligators and crocodiles, it also created habitat for one of the largest bird migration routes in North America. These wetlands serve as green infrastructure, natural buffers that reduce flood risks to the vast energy production and port facilities of the Gulf area as well as human settlements inland from the coast. Early settlers in New Orleans were more concerned by flooding from the Mississippi than by the threat of Gulf storms, which would be protected by extensive coastal forests that stood between the city and the Gulf of Mexico.

Hurricane Isaac is the first test of a $14.5 billion, 133-mile ring of levees, flood walls, gates and pumps installed after Hurricane Katrina by the Army Corps of Engineers, the agency that built the defenses that failed New Orleans catastrophically in 2005. This includes the “Great Wall,”, a new $1.1 billion, 1.8 mile-long, 26-foot high wall protecting New Orleans East and St. Bernard Parish from surrounding waterways. In the four-parish New Orleans area, 78 water pumps have been upgraded, but drainage systems are lacking. Bayou Chaland: Dead Zones have developed in the Mississippi Delta and Gulf of Mexico associated with upstream runoff of agricultural fertilizers and wastes as well as impacts from the BP Gulf Oil Spill.

Levees raised along Mississippi banks in the 1930s ended spring floods, ostensibly to protect lands converted to agriculture, industry, and human settlement. The vital sediment that once breached natural levees and nourished wetlands instead channeled into the Gulf, in essence starving the delta and causing it to recede. The effect of levees was exacerbated by the construction of 8,000 miles of major ship channels connecting Mississippi River commerce and pipeline corridors that crisscrossed the wetland landscape to provide access for extracting oil and gas resources. Moreover, the coast has further washed away through delta soils natural subsidence, the devouring of marsh roots by the escaped South American nutria (imported by fur farmers), and global-warming-induced powerful storms resulting in sea-level rise.

During the 1960s and 1970s, coastal land, mostly wetlands (such as the Barataria Basin), disappeared at the rate of 39 square miles per year. Despite nearly half a billion dollars spent over the past decade to stem the tide, the state continues to lose about 25 square miles (65 square kilometers) of land each year, roughly one acre every 33 minutes.

From the upcoming documentary “Can’t Stop the Water” from Rebecca Ferris at Cottage Films.

The Beast filmmakers used as their topographic setting Isle de Jean Charles, a narrow island deep in the bayous of South Louisiana. The isle, emblematic for a sinking community, has only few dozen families left, most of whom are members of the Biloxi, Chitimacha Confederation of Muskogees (BCCM), a not federally recognized indigenous group. Residents live in houses on stilts to protect themselves, and their way of life, from flooding into oblivion.

Isle de Jean Charles will not be included within the boundaries of the massive 72-mile Army Corps of Engineers levee project scheduled to be completed in 2020, yet its residents refuse to uproot – a theme of defiance echoed in Beasts, in which citizens of the fictional Bathtub bayou community stay put through apocalyptic weather. 2010 BP Gulf Oil Spill, the worst in history, continues to pollute the coast of Louisiana.

The effects of oil and gas development, not covered in Beasts, pose even more dangers for bayou communities. The BP-Deepwater Horizon Oil Spill gushed unabated from the sea floor into the Gulf of Mexico for three months of 2010 and continues to seep from fissures near the capped wellhead. It was the largest accidental marine oil spill in the history of the petroleum industry, releasing more than 200 million gallons of oil and one million gallons of toxic Corexit dispersant. Over 1,000 miles of beaches and wetlands were oiled. According to Oceana, more than 8,000 birds, 1,000 sea turtles and 600 dolphins and whales have been collected either dead or injured near the site of the spill. Ancient deepwater corals that can live more than 2,000 years were killed by oil from the spill.

At least 93 pollution incidents related to Hurricane Isaac should have been prevented by proper precautions by oil and gas, chemical and coal-handling facilities, said representatives of three environmental groups.

Further impacts from oil: over 20% of the critical spawning habitat of Atlantic bluefin tuna was slicked during the peak spawning months; their populations have already declined by about 80% since 1975. Total economic damages from impacts to fishing-dependent industries could cost $8.7 billion and 22,000 jobs over the next 7 years. Some historically abundant shrimp fishing grounds are 80% or more below normal catch levels. 400 pounds of white shrimp without eyes were recently caught, and lesions and deformities are showing up on fish, crabs and other wildlife. With over a hundred drilling rigs operating offshore on the Gulf Coast, it is only a matter of time until the next oil spill disaster.

Two years after the worst accidental oil spill in world history, Congress has failed to pass a single law to improve the regulation and safety of offshore drilling. In fact, according to Offshore Magazine the global exploration for deepwater oil and gas fields continues unabated, despite recent economic turmoil and concerns about where energy prices might go. The Louisiana Coastal Protection and Restoration Authority (CPRA) is a governmental authority created in the aftermath of Hurricanes Katrina and Rita. The CPRA have put forward their 50-year vision, Louisiana’s 2012 Coastal Master Plan: A New Path Forward, which focuses on reducing flood risk, allocating protection and restoration funds and encourage projects that build new land or sustain existing areas. The plan advocates investment in restoring barrier islands, headlands, and shorelines as first lines of defense against tropical storms and hurricanes. According to the plan it would reduce future risk of damage from flooding throughout Louisiana’s coast by $5.3 billion to $18 billion annually. This would be accomplished through the investment of $20 billion into sediment mining and marsh creation projects, with potential to build between 580-800 square miles of land.

“The 2012 Coastal Master Plan illustrates the type of bold, decisive action needed to build a more secure future for coastal Louisiana’s communities, industries and wildlife. We must restore the Mississippi River’s ability to build and sustain our wetlands and barrier islands, which provide us with critical natural resources and a first line of defense against hurricanes.”

The organizations go on to advocate that the $50 billion necessary to achieve the state’s vision of restoration will come from Congress, through the recently passed and signed RESTORE Act. It would dedicate 80 percent of Clean Water Act penalties from the gulf oil disaster toward Gulf Coast environmental and economic restoration. These funds, possibly $5 billion up front, could be used to initiate the development of restoration projects in the Coastal Master Plan. Unfortunately, the upfront money and the long-term funded are far from being allocated as yet, subject to politics and many competing interests.