By
Jack Eidt
– Posted on December 8, 2012Posted in: Design, Sustainability Feed Your City: How Architecture and Farming Work Together

Currently around the seven billion mark, the world’s population is expected to rise to 10 billion by 2050. But with 80 per cent of the planet’s usable farmland already cultivated, the effects of climate change wreaking havoc across large areas of existing farmland, and more than 10 per cent of humanity going to bed hungry every night, growing enough sustenance for these three billion new mouths is not going to be easy.

Vertical farming and urban agriculture offer relief in metropolitan environments, helping to provide the public with local fresh food while also changing the traditional approach to food production. WilderUtopia has written about urban agriculture as a method toward reclamation and revitalization of blighted landscapes in the city of Detroit. Urban farming can improve ecological balance while mitigating environmental degradation within cities, the paving over of thousands of acres of prime farmland, at the same time decreasing food deserts. We have also written about urban permaculture, re-envisioning cities as sustainable ecosystems, planned with natures organizing principles in mind. Designers, permaculturists and entrepreneurs continue to investigate efficiencies and spatial methodologies to grow food in urban and peri-urban environments.

Plantagon’s geodesic Stand-Alone Industrial Vertical Greenhouse is a building dedicated to the industrial production of food, integrated within the city’s infrastructure, creating a new urban environment. Their “transportation helix” technology exploits production-line benefits of moving boxed crops on a static rail by machines around the growing area. The project will function using excess heat and waste from the nearby industries for biogas energy and fertilizer. Read more about this project here.

Though energy and lighting concerns about vertical farming have been addressed in various proposals, Stan Cox in Counterpunch maintains:

Lighting is only the most, um, glaring problem with vertical farming. Growing crops in buildings (even abandoned ones) would require far more construction materials, water, artificial nutrients, energy for heating, cooling, pumping, and lifting, and other resources per acre than are consumed even by today’s conventional farms—exceeding the waste of those profligate operations not by just a few percentage points but by several multiples. Bright Dawn Farm, presented as a solution to a future suburbia by Freecell, sets out horizontal greenhouses for growing produce in the suburban backyard. Photo by Allison Arieff

“Welcome to Future Suburbia: Open House 2011,” by the Dutch design collective Droog in collaboration with Diller Scofidio + Renfro, set forward nine different house installations of a forward-thinking design and lifestyle prototypes. Examples addressed the problems of single-home consumption and urban sprawl, set in the iconic Long Island suburb of Levittown. As part of this, Freecell (Lauren Crahan & John Hartmann) designed a suburban farm with a horizontal greenhouse that can grow hundreds of pounds of produce to be sold to the local community. See more about this project on the Architizer database here. The Fifth Street Farm, a school rooftop farm in the East Village of Manhattan, brings food production and the natural world to inner-city students learning experience. Photo by Atsuko Quirk

The Fifth Street Farm Project is a 3,000-square-foot green roof project on the Lower East Side of Manhattan. Situated on top of the Robert Simon School Complex in the East Village, the green roof gave teachers the opportunity to integrate farming and plant life into the inner-city students’ curriculum. Read more about this project in the Architizer database. Urbanana is a large vertical greenhouse-like structure proposed to fill the gaps between Haussmann-period buildings along Paris’s boulevards. This facility would grow bananas, and other edible plants unsuited to Paris’s climate, obviating the waste of transporting these products thousands of miles.

The façade of the building provides maximum transparency and, with additional artificial lighting, it creates optimal conditions for banana  growth. It is supported by a three-dimensional metal structure, creating an appearance of a botanical garden. The planting space, occupying a height of six floors, is serviced by technical bridges. The ground floor houses public content, including a research laboratory and an exhibition area showcasing the banana sector. The entire building is a highly mechanized design that promotes and develops agricultural urbanism.
Read more about this project on Architizer. Farmadelphia could transform the landscape of the city by converting vacant lots into agricultural plots. Sunflowers aid in the bio-cleansing of land in preparation for crop farming. Photo courtesy of Front Studios

FARMADELPHIA proposes to transform the urban environment by introducing bucolic farmlands into the Philadelphia’s urban fabric, combining both city and rural lifestyles. Vacant lots would be converted into agricultural plots, and the abandoned buildings that occupy many of those sites would become useful again in the context of the farm. Read more about the project in the Architizer database here. 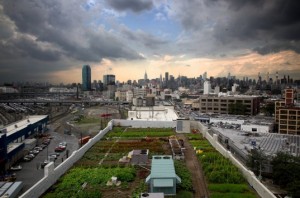 The largest rooftop farm in the United States, Brooklyn Grange Urban Rooftop Farm is a 40,000 square foot for-profit farm situated atop the former Standard Motors manufacturing facility in Queens. is the product of Wisconsin native and Head Farmer Ben Flanner, who in 2009  started Eagle Street Rooftop Farm, the first rooftop soil farm in NYC.  Read more about this project on the Architizer database here.

Earlier this year the five core members of Brooklyn Grange signed a 20-year lease for a 65,000-square-foot rooftop at the Brooklyn Navy Yards. In just two years they outgrew their Queens location, which services a CSA membership, regular farmers’ markets as well as local restaurants like Roberta’s and Paulie Gee’s. Now, with more than two acres of fertile ground as well as chicken coops and a commercial apiary, Brooklyn Grange seems poised to conquer underutilized rooftops all over the city.

Architizer is hosting the world’s definitive architectural awards program, with 50+ categories and 200+ jurors. As part of an ongoing series, we’re spotlighting projects that fit into “Plus” categories, including “Farming,” that tap into topical and culturally relevant themes. To see a full list of categories and learn more about the awards, visit architizerawards.com.