By
Jack Eidt
– Posted on May 5, 2017Posted in: Climate, Energy, Politics and Advocacy

Hundreds of thousands marched on April 29th across the US and the world calling for solutions to the growing global climate crisis. In Los Angeles, demonstrators converged near a major petroleum refinery and two major ports in support of the nearby vulnerable communities calling for protections for their health and safety. Unfortunately, not two weeks later, behind closed doors, the regional Air Quality District gave the Tesoro LA Refinery Expansion the environmental go-ahead, now known as Andeavor, ignoring the pleas of thousands. Sign this petition to register your disapproval! Between 5 and 8,000 people from all over Southern California converged on Wilmington for the Los Angeles People’s Climate March on Saturday, April 29. They marched to the Tesoro Refinery to speak out against the dangers to communities and the planet from our fossil fuel addiction. Speakers such as Robert F. Kennedy Jr., California Senator Kevin de Leon, and Actor and Activist Jane Fonda joined many advocates for and residents of the vulnerable communities surrounding the five nearby refineries. “Climate Change starts in our hoods,” was the slogan which characterized the march as activists from Communities for a Better Environment led the march. Photo by Hannah Benet.

Activists crowded Pacific Coast Highway marching towards Tesoro’s Los Angeles facility, now undergoing a merger/expansion with BP Carson, seeking to create the largest refinery on the West Coast of North America. They plan to double the storage capacity of dirty and volatile crude oils from Canada and North Dakota, the same threats which inspired movement against the Keystone XL and Dakota Access Pipelines, both recently green-lighted by President Trump’s Executive Orders.

Waving banners and signs, the crowds in Wilmington called for stopping the Tesoro merger and the health and safety threats it poses in favor of cleaner, renewable alternatives. Actor and activist Jane Fonda speaks to the crowd during the People’s Climate March protest for the environment in LA’s havily industrialized Wilmington neighborhood.
Photo by REUTERS/Andrew Cullen

“[The people] who live here near the Tesoro Refinery are on the frontlines — in the neighborhood known as the ‘sacrifice zones,’” said Jane Fonda. “They and their families are the vulnerable victims of cancer-causing benzene and daily exposure to all the other toxins refineries spew into our air and water. I have been to Standing Rock and it is true when they say Standing Rock is everywhere.” Whitney Amaya organizes with East Yard Communities for Environmental Justice to address the industrial pollution in her West Long Beach community. She says they are fighting back at environmental racism, where communities of color face a disproportionate amount of pollution from refineries like Tesoro’s. Walking along with Kimberly Amaya, Whitney said, “We march because we’re tired of the high rates of asthma and cancer in our community caused by industrial pollution. Our health should be of first priority! People over profit!” 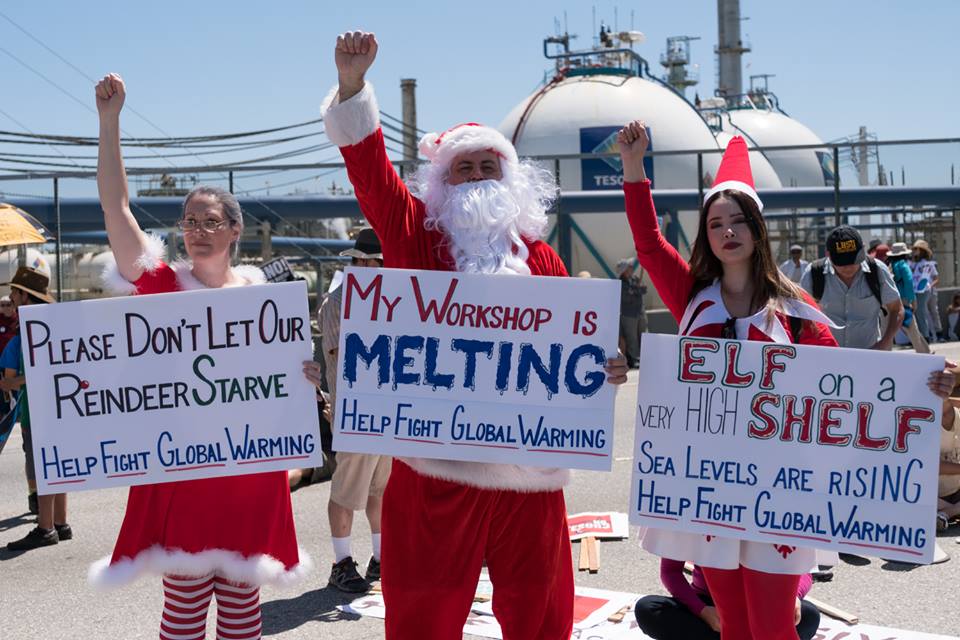 Even Santa’s family made it down to Tesoro to protest. Photo by Hilary White.

Senior Scientist from Communities for a Better Environment Julia May said in her rally speech, “The new joint study of the Air District and Swedish Scientists measured Tesoro’s benzene emissions at 43 times the reported emissions – confirming what many of us have said for years – that the standard calculations used severely underestimate emissions.” She continued, “Benzene is a known cancer-causing chemical, compounding the harm to local communities of color surrounding the refinery – they don’t need even more benzene from the North Dakota crude oil swap that Tesoro has announced to its investors.” Jules Luna Asked to Give Earth a Chance, with the oil trains parked underneath. Photo by REUTERS/Andrew Cullen

The study also found actual emission of Volatile Organic Compounds (VOCs) were 6.4 times greater compared to the District inventory. These emissions were found particularly in the area of storage tanks, which Tesoro plans on doubling the existing capacity as part of their merger/expansion. The groups involved hope the AQMD will send existing studies back to the analysis phase, but as yet no decisions either way have been made publicly. Indigenous Nations and groups were well represented on April 29, having come together to fight the Dakota Access Pipeline last year, and continuing the movement across the US working with political, labor, environmental, and social justice groups. The Southern California Indigenous community, including the local American Indian Movement (AIM) chapter, Red Earth Defense, and members of the Tongva, Chumash, Tataviam, and Acjachemen Nations, have been active pushing for the City of Los Angeles to divest from banks such as Wells Fargo that fund pipelines that lead to industrial sacrifice zones.

Lydia Ponce, Co-Director of AIM Southern California, said: “We are building a movement to divest Umerikka across stolen land. We are empowered, we, the Indigenous people, will lead with the message of defending Earth Mother Rights. We must use the power of prayer, unity in our peaceful communities, near and far, as Standing Rock is Everywhere, and it’s not over.” Thousands converged on the LA Harbor Area to march for solutions to the climate crisis and stopping the Tesoro Refinery merger at the People’s Climate March Los Angeles. Photo by Hannah Benet.

At the entrance to Tesoro’s LA facility, members of the Indigenous community led by Shannon Rivers from the Akimel O’otham Nation crossed barricades, requesting from the Los Angeles Police Department to pray for them, for the workers, for the community, for the children. After a tense few moments and much discussion, youth from the Semillas Community Schools and the elders involved held a prayer for Mother Earth and all of us. Then the march moved on, returning to Banning Park in Wilmington, letting business and traffic continue once again.

The police wouldn’t budge, though when Rivers told the officer that we are doing this for our children, I could see signs of understanding, humanity and sympathy in the officer’s eyes for he too had children, he said. “But he had to do his job. No, I didn’t like one of the officers laying his hands on me a couple of times, no I did not like that they wouldn’t let us through. But what I loved was that thousands of us who snaked through the streets of Wilmington and stood together for Mother Earth and all her beings. I loved to see Adrien and Mazakahomni, the young sons of our indigenous brother, George Funmaker,  walk with their heads held high, leading the march. I loved how our resilience allowed us to – despite the blazing sun and the heat that the asphalt beheld under our feet –  march for hours through the concrete jungle and the dome shaped oil refineries raping the land.”  — Ursula Vari Marking the 100th day of Donald Trump’s presidency, thousands of climate activists also converged in Washington, D.C. and 250 “Sister” cities internationally. Trump has threatened to pull the U.S. out of the Paris climate accord, and installed climate change deniers at the head of several key agencies, including the Environmental Protection Agency, and proposed slashing its budget and other climate programs. This comes as scientists have confirmed 2016 was the warmest year on record.