By
Jack Eidt
– Posted on January 16, 2015Posted in: Climate, Politics and Advocacy

SoCal 350 Climate Action along with and Californians Against Fracking and people from across the state gathered on Feb 7 in Oakland — Governor Brown’s hometown — to demand real climate leadership in the face of the impending climate crisis and ongoing drought, with an unconventional oil boom that includes fracking, oil trains, and expanded refinery capacity.

This is what 8,000 people marching for Real Climate Leadership looks like.


Over 8,000 people came together in Oakland to call for a ban on fracking in California. Despite some much-needed rain, the March for Real Climate Leadership was one of the biggest climate rallies California has seen — and it was biggest action against fracking anywhere in US history.

Our movement is growing. We’ve had victory after victory in the last year — in San Benito County, Mendocino County, Carson, and dozens of other cities — and Saturday was proof that together we’ve turned all that energy into an incredible amount of momentum going forward. Here are the details:

WHAT: The March for Real Climate Leadership
WHEN: 11:30 AM on Saturday, February 7
WHERE: Frank Ogawa / Oscar Grant Plaza, 14th and Broadway, Oakland, California [Map]

Tickets from one of our stops in SoCal!

An Open Letter to the People of California

In the story of California politics, Governor Jerry Brown benefits from the widely-held notion that he is a leader on climate issues. But over the last four years, Governor Brown has not delivered on his promise to put our water and health first in order to carry California into a new clean-energy economy. Instead, he’s chosen to expand extreme oil and gas extraction, which harms our communities and undermines his own greenhouse gas reduction goals for California.

Governor Brown continues to allow hydraulic fracturing or “fracking” to extract oil in California even in the face of clear and abundant scientific evidence warning against this method’s dangers. There is little to no safety oversight around fracked wells, even those located just yards from elementary schools and next to farms that feed the nation and the world. If Governor Brown really cares about climate issues, how can he ignore the emissions from fracking, the billions of gallons of oil industry wastewater injected into aquifers, and the health problems associated with fracking in the Central Valley, Los Angeles and beyond?

California Governor Jerry Brown recently proposed the most ambitious renewable energy targets in the US, but that does not mitigate his support for the controversial high-intensity oil extraction technique known as hydraulic fracturing (fracking)…  — DeSmogBlog

The sunset of Governor Brown’s career coincides with two key crises: a historic drought that threatens California communities, and – tied to the drought — climate change, the biggest challenge of our time. Yet, Governor Brown continues to allow the oil and gas industry to waste 2 million gallons of fresh water a day on extreme oil extraction in California. He continues to support these toxic methods that sabotage the goals of Senate Bills 1204 and 1275, which he signed in September to address air pollution in at-risk communities by cutting emissions that threaten respiratory health.

As he prepares for his final term as Governor of California, Jerry Brown must choose: Will he stand up and do right by our water, our health and our communities by ending extreme oil extraction; or will Brown claim his legacy as the Governor who chose not to protect Californians from oil and gas industry greed?

“Californians around the state are affected by the oil industry in different ways—whether they are exposed to dangerous toxins from living near a drilling site, have potentially explosive trains rumbling through their neighborhoods carrying crude oil—but we all stand to lose if we continue to ignore warnings that spell out doom if we don’t put an end to the use of fossil fuels.”  — David Braun 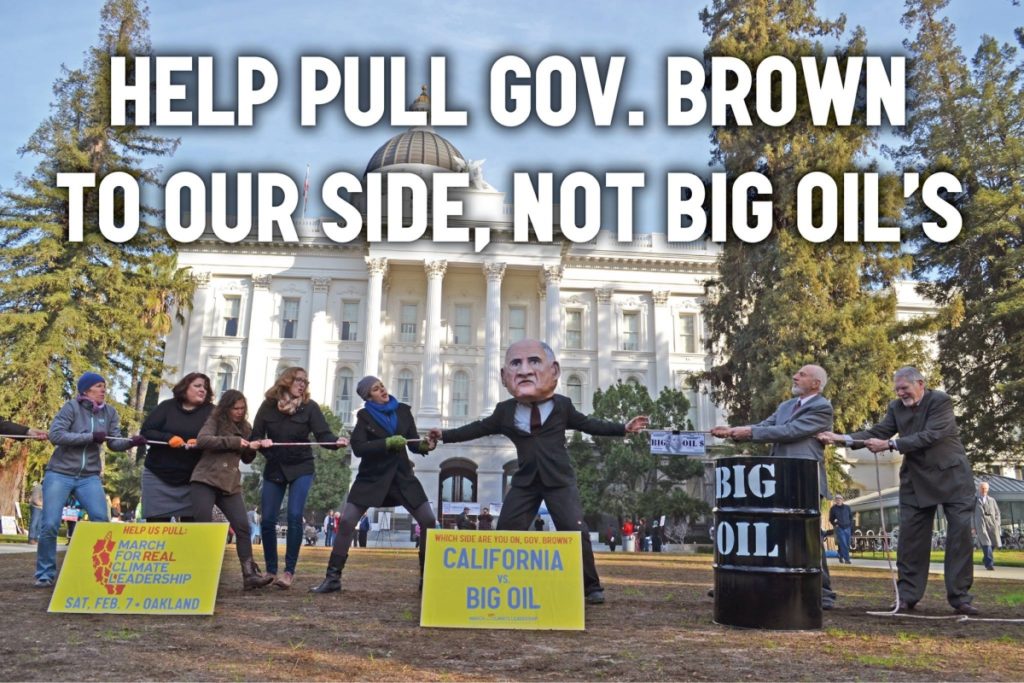 The people want Governor Brown to do the right thing and the momentum is clear. Last March, 4,000 people rallied in Sacramento urging Governor Brown to end fracking. Over the last year leaders across California have pushed back on fracking in their hometowns and people in directly affected communities are rising up every day to send a roaring message to Governor Jerry Brown: Californians don’t want fracking and climate leaders don’t frack. During this fall’s election, voters in two California counties – San Benito and Mendocino – passed local bans on fracking.

Join this fight. On Saturday February 7th, 2015, join thousands of Californians marching through the streets of Oakland California, Governor Brown’s home city. March to demand that Governor Brown use his last term in office to truly become the climate leader who helped protect California’s water, health and communities for generations to come. Go to marchforclimateleadership.org to register, to learn about bus transportation or about how your organization can become a partner. Together, we can make the February 7th March for Real Climate Leadership a game-changing moment for California and for Governor Jerry Brown’s legacy.

The Many Organizational Partners Hosting the March for Real Climate Leadership