Nico, Warhol Muse, from the Dark Side of the Street

At one time billed as the Moon Goddess and Andy Warhol It-Girl, singer Nico’s dark, avant-garde music and deep, hypnotic voice were first heard in the Velvet Underground. She continued to work sporadically as a solo artist after leaving the Velvets, though a longtime heroin addiction and methadone dependency sidetracked her career. Check out the documentary on her life, Nico:Icon.

Nico:Icon: A look into the many lives of Christa Päffgen, otherwise known as Nico. Documentary by Susanne Ofteringer, 1995

Nico was one of the most fascinating and mysterious women of the multimedia revolution of The Sixties, and long after that till the present day. She was born on October 16th, 1938, in Cologne, in Nazi-controlled Germany. At the age of two she was taken to the little town of Spreewald on the outskirts of Berlin where she lived together with her mother and grandfather, a railway man, through the end of World War II. Her father died in a concentration camp.

Fleeing from the Russian occupation in 1946, mother and daughter wound up in the ruined American Sector of Berlin where Christa (Nico’s real name is Christa Päffgen) worked part-time as a seamstress. She was sent to school till she was 13 years old, then took a job selling lingerie. After a year, her mother found her work as a model with a Berlin fashion house. 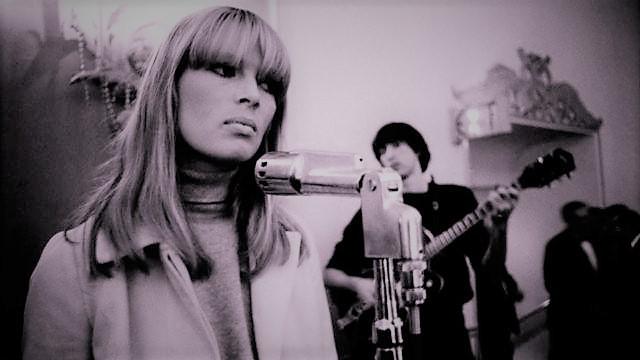 For the First Time

At 15 she was sent to the Isle of Ibiza on assignment and met the photographer who gave her the name Nico after a recently departed boyfriend of his, called Nico Papatakis. Later on, she also met him as the owner of a night-club in Paris. She first appeared in For the First Time, starring Mario Lanza and directed by Rudolph Maté, in a short scene shot in Capri between June and November 1958. At Ibiza, Nico began a lifelong involvement with the isle. On holidays at a friend’s villa in Rome, Nico was invited to the set of La Dolce Vita. Fellini noticed her standing off in a corner and offered her a sizable role in the film on the spot. It was 1959.

Her reputation grew and she and her mother left for Paris where Nico was signed to a much larger modeling agency. Soon her picture was appearing in magazines and commercials all over the world. Paris was her home for the next five years, with frequent holidays in Ibiza.

In 1960 Nico went to New York to model and enrolled in Lee Strassberg’s Method School, joining the same class as Marilyn Monroe, in preparation for a career as a serious actress. In November 1962, she had a big role in a French movie called Strip-Tease, where she did an act with a doll on stage at a club. She made her very first recording with Serge Gainsbourg producing the title song Strip-Tease, but it was Juliette Gréco’s version that was released instead. In 1964 she met Brian Jones, through him she met Stones manager Andrew Loog Oldham, and made her first record for his Immediate label: I’m Not Sayin, a Gordon Lightfoot song, produced by Jimmy Page.

Returning to New York later in 1964, Nico went back to work as a model and landed a job singing at the Blue Angel Lounge on 55th Street (all drinks 85¢). She had an affair with French actor Alain Delon, whom she had met in Italy in 1962, and had a child. Nico called the boy Ari. In that period everybody wanted to know that mysterious blonde girl, and gave her short but complete adoration.

Afterwards in Paris, Nico met Bob Dylan who urged her to pursue her career as singer and gave her a song: I’ll Keep It with Mine, later recorded on the solo debut-album Chelsea Girl. Dylan wrote her a tribute on his album Blonde on Blonde called “Visions of Johanna.” Later he introduced her to Andy Warhol, who began to feature her in his and Paul Morrisey’s experimental films.

Legend has it that Nico told Andy: ‘I want to sing’ and he introduced her to his latest protégés, The Velvet Underground became a part of Warhol’s mixed-media Exploding Plastic Inevitable troupe until 1967. At that point Nico gave up modeling and spent a year touring with them. She joined then to sing in long improvisations as well as the classic Lou Reed compositions: “Femme Fatale,” “All Tomorrow’s Parties,” and “I’ll Be Your Mirror.” Even before the legendary Banana album was released, she went her own way; the band worried about being eclipsed by her haunting, charismatic presence and forced her out of the line-up. The main reason was trouble between her, Lou and John Cale, jealously in love and hate, something Andy loved to witness.

Yet she had already begun singing at the downstairs bars of the legendary Dom Club. Backed by an ever-changing cast of guitar players, they included Tim Hardin, Tim Buckley, Ramblin’ Jack Elliot, even three of The Velvets, and most often the 16 year old Jackson Browne. For a while she lived with the young songwriter and recorded several of his early compositions in 1967 along with the song Dylan gave her, unrecorded Velvet Underground tunes like “Wrap Your Troubles in Dreams,” and new Reed/Cale compositions for her solo-album Chelsea Girl.

The tone was set: her deep narcotic monotone voice became one of her trade-marks, as well as her low moans, high cheekbones and heavy make-up, a style resurrected by the goths, who anticipated the ‘Nico From The Grave Look’. With John Cale as her producer, she made three albums full of mysteries, loaded with strange sounds and feelings and she started touring in a small scale, mostly in France and Spain, sometimes in the early Seventies in New York’s CBGB’S. Her performances in those times were unforgettable experiences; her singing, her playing on the old Indian pump organ, almost in a mystical intensity, echoing around the mind of the listener.

In 1969 she met film director Philippe Garrel in Italy and made ten movies with him over the next five years, shot on location in Iceland, Egypt and Death Valley. Most of these movies were long improvised scenes at the strangest places with a very hazy story, built around the main character.

1976—1979 found Nico more or less down and out in New York. She even had lost her manager and friend Lutz Ulbrich. She moved to London to record the Drama of Exile album in 1981, a record with an history of stolen master-tapes, re-recorded versions and most of all an unhappy Nico. But from that time her touring was more regular, mostly with young musicians, who brought a universal mystical oriental sound on stage, sometimes in contradiction with Nico’s cool and static approach, always smoking and drinking, but always very intense and fragile in her performance. During this nowhere really at home. She loved things that were part of that.

After nearly a decade’s wait she released in 1985 a new album, Camera Obscura, once again produced by John Cale. It was an album that placed Nico right in the middle of all the experiments that took place in the eighties. Some of the younger audience saw her as the return of a ‘punk goddess,’ singing about the dark side of the street, but her performances became more and more a tribute to dead friends, a requiem-like atmosphere.

On 18 July 1988, she went for a bike-ride on the isle of Ibiza. She was visiting again, a healthy-living woman, almost clean of her narcotic past. People found her unconscious by the side of her bike, and took her to the Cannes Nisto Hospital, where she died at 8 pm of a brain hemorrhage. Not the thing we expected from the woman who always resided in places the sun couldn’t reach.

Her ashes were buried in Berlin, in a small cemetery in the Grunewald Forest, at the edge of the Wannsee, in to her mother’s grave, Margarete Päffgen (1910-1970) on 16 August 1988, with a few friends playing a song from “Desertshore” on a cassette recorder …

Dear little mother
Now I can finally be with you
The longing and loneliness
Release into bliss.
Adapted from Nico Songs 1965-1988.