Walkabout, vision quest, walking in Dreamtime, all of it refers to a particular rite of passage from the indigenous Australians, but also in evidence in animist cultures throughout the world. The 1971 Nicolas Roeg film of the same name narrates a young woman and her brother’s journey beyond their Western frame, but never quite able to follow the ancestor paths, or songlines, of the land. 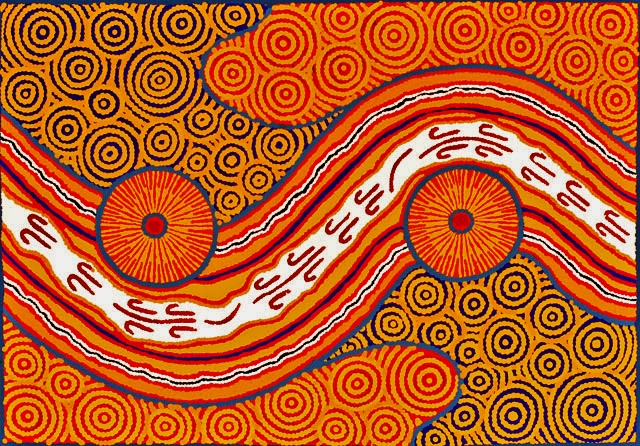 Walkabout is a 1971 film set in Australia, directed by the late Nicolas Roeg and starring Jenny Agutter, Luc Roeg (credited as Lucien John) and David Gulpilil. Edward Bond wrote the screenplay, loosely based on the novel The Children by James Vance Marshall. Walkabout premiered in competition at the 1971 Cannes Film Festival.


“There is always one moment in childhood when the door opens and lets the future in.” Quoted by Nicolas Roeg

Walkabout refers to a rite of passage during which male Australian Aborigines would undergo a journey during adolescence and live in the wilderness for a period as long as six months.

In this practice they would trace the paths, or “songlines,” that their ancestors took, and imitate, in a fashion, their heroic deeds. Also called a dreaming track or footprints of the ancestors, one of the paths across the land (or sometimes the sky) which mark the route followed by localized “creator-beings” during the Dreaming. In the Aboriginal world view, every event leaves a record in the land. Everything in the natural world is a result of the actions of the archetypal beings, whose actions created the world. The paths of the songlines are recorded in traditional songs, stories, dance, and painting.

The Australian Aborigines speak of jiva or guruwari, a seed power deposited in the Earth. In the Aboriginal world view, every meaningful activity, event, or life process that occurs at a particular place leaves behind a vibrational residue in the Earth, as plants leave an image of themselves as seeds. The shape of the land – its mountains, rocks, riverbeds, and water holes – and its unseen vibrations echo the events that brought that place into creation. Everything in the natural world is a symbolic footprint of the metaphysical beings whose actions created our world. As with a seed, the potency of an earthly location is wedded to the memory of its origin.

A knowledgeable person is able to navigate across the land by repeating the words of the song, which describe the location of landmarks, waterholes, and other natural phenomena. In some cases, the paths of the creator-beings are said to be evident from their marks, or petrosomatoglyphs, on the land, such as large depressions in the land which are said to be their footprints.

“Aboriginal Creation myths tell of the legendary totemic being who wandered over the continent in the Dreamtime, singing out the name of everything that crossed their path – birds, animals, plants, rocks, waterholes – and so singing the world into existence.”  — Bruce Chatwin in “Songlines“

By singing the songs in the appropriate sequence, Indigenous people could navigate vast distances, often traveling through the deserts of Australia’s interior. The continent of Australia contains an extensive system of songlines, some of which are of a few kilometers, with others traversing hundreds of kilometers through lands of many different indigenous communities who may speak markedly different languages and have different cultural traditions.

Since a songline can span the lands of several different language groups, different parts of the song are said to be in those different languages. Languages are not a barrier because the melodic contour of the song describes the nature of the land over which the song passes. The rhythm is what is crucial to understanding the song. Listening to the song of the land is the same as walking on this songline and observing the land. Walkabout: memory, rooted in recollections of a time of great intensity, of growing, of puzzling, of understanding. We look back at that stage in our life and find memories of the pain we felt and the pain we inflicted, unthinkingly, because we did not understand ourselves and our burgeoning relationship to a new, strange adult world. – P. Ryan, Criterion Collection

Dreamtime and the Western Frame

In the animist framework of Australian Aboriginal mythology, The Dreaming is a sacred era in which ancestral spirit beings formed creation.

“Dreaming” is also often used to refer to an individual’s or group’s set of beliefs or spirituality. For instance, an indigenous Australian might say that he or she has Kangaroo Dreaming, or Shark Dreaming, or Honey Ant Dreaming, or any combination pertinent to their “country.” Many Indigenous Australians also refer to the Creation time as “The Dreaming.” The Dreamtime laid down the patterns of life for the Aboriginal people.

Nicolas Roeg’s film touches on the inability for the Western minded to flow onto the land, to listen to the songs, to imbibe the breeze. While it falls victim to some stereotyping and gratuitous sexualizing of the young woman depicted, part of its journey is the opening of the body in connection with the land, the gradual undoing of the industrialized mentality, and in the end, the inability for the British folk walking the land to listen to the songs. It is, however, a close approximation of the journey of undoing that the Western-mind must transgress in order to perceive what the dreaming might be whispering all along. Thus, it is a beautiful testament by an amazing film talent.

La Belle et La Bête - Natural Surrealism of a Misunderstood Beast
Myth: The Crow Who Visited the Land of the Seven Cranes
Detropia: Detroit as Utopia or Dystopia?
Aboriginal Dreamtime: The Rainbow Serpent
Permaculture: Sustainable Antidote to Agribusiness and Consumer Culture
Eye of God: Big Bear's Sacred Site of Creation
John Cage: Dreaming in Sustained Resonance
Chumash Elder Speaks on Healing Humanity and the Climate
Dada as the Antidote to War and Capitalism