Harry Partch broke with European tradition and forged a new music based on primal integration of sound and speech, using self-designed instruments tuned with natural acoustic resonance or just intonation. The result was a beautiful sound and vision with “magical purpose.” Harry Partch (1901-1974), a most individualistic composer, was also an innovative theorist who reimagined the Western music tuning system. He invented dozens of musical instruments for performance of his creations. As a musical dramatist, he created texts and dance/theatre extravaganzas based on a wide range of subjects from Greek mythology to his own experiences as a drifter.

“Delusion of the Fury, Act I: Treats with Death and with Life Despite Death: Pray for Me,” by Harry Partch.

With parents who were former missionaries to China, growing up in isolated areas of the American southwest, Partch was exposed to a variety of influences from Asian to Native American. After dropping out of the University of Southern California, his self-education led to questioning the tuning and philosophical foundations of Western music. During and after the Great Depression, he was an itinerant worker and rode the trains, chronicling his experiences in a journal called Bitter Music.

Some entries included everyday vernacular speech, wherein Partch transcribed the speaker’s pitches on musical staves. This technique, which had been used earlier by the Florentine Camerata, Berlioz, Mussorgsky, Debussy, Schoenberg, Leoš Janácek and others (and would be later used by Steve Reich), was to become a standard approach to vocal scoring in Partch’s work.

In 1930 Partch broke with Western European tradition and forged a new music based on a more primal, corporeal integration of the elements of speech, using principles of natural acoustic resonance (just intonation) and expanded melodic and harmonic possibilities.   He began to first adapt guitars and violas to play his music, and then created his own instruments in a new microtonal tuning system.

By 1969, the year he recorded “Delusion of Fury,” Partch had designed 27 new instruments, all to be played at the same time in a spatial ritual theater. Made to be beautiful in sound, vision, and “magical purpose,” some, like the Chromelodeon, had as many as 43 tones in a single “octave.”

‘US Highball-A Musical Account of a Transcontinental Hobo Trip’ 1955. Performed by the Gate 5 Ensemble.

“I feel that the only investigation that has genuine integrity is the seen and heard performance.” -Harry Partch

Just Intonation is the system of tuning pitches to the simplest and most possible intervals. Natural, clear and consonant, the intervals are based on simple arithmetic relationships, often called microtonal. Generally, the simplest fractionals sound the most harmonically stable; the more complex, the most dissonant.

In addition to Partch, composers such as Lou Harrison, Terry Riley, Ben Johnston, and La Monte Young were more interested in getting back to these more resonant harmonies. For La Monte Young it meant retuning the piano or using pure sine waves to produce perfect harmonies. Lou Harrison looked to cultures that had already developed their own instruments. Henry Cowell designed his Rhythmicon to apply the same harmonic series to the proportions of rhythmic cycles; thus, duplet rhythm would correspond to an octave (2/1), triplets to a fifth (3/2), etc.

Daphne of the Dunes. Music by Harry Partch. Performed live by Newband. Staging, Costume Design and Choreography by Alice Farley 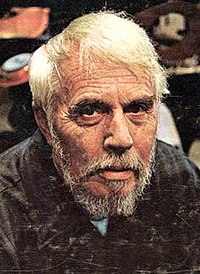 Harry Partch (c. 1969), from the cover of “The World of Harry Partch” (Columbia Masterworks LP)

Largely ignored by the standard musical institutions, Partch criticized concert traditions, the roles of the performer and composer, the role of music in society, the 12-tone equal-temperament scale and the concept of “pure” or abstract music.  To explain his philosophical and intonational ideas, he wrote a treatise, Genesis of a Music, which has served as an inspiration to experimental microtonal musicians and instrument builders for the last half century.