A wildfire raged almost unchecked for an 13th day on Friday, after engulfing an evacuated town, forcing thousands of people in nearby towns to flee and leaving 386,000 acres of pine, fir, and spruce forest in the White Mountains of eastern Arizona blackened. Called the Wallow fire after the Bear Wallow Wilderness is described as 5 percent contained as firefighters were helped by weakened winds Thursday. 4,000 structures remain threatened. 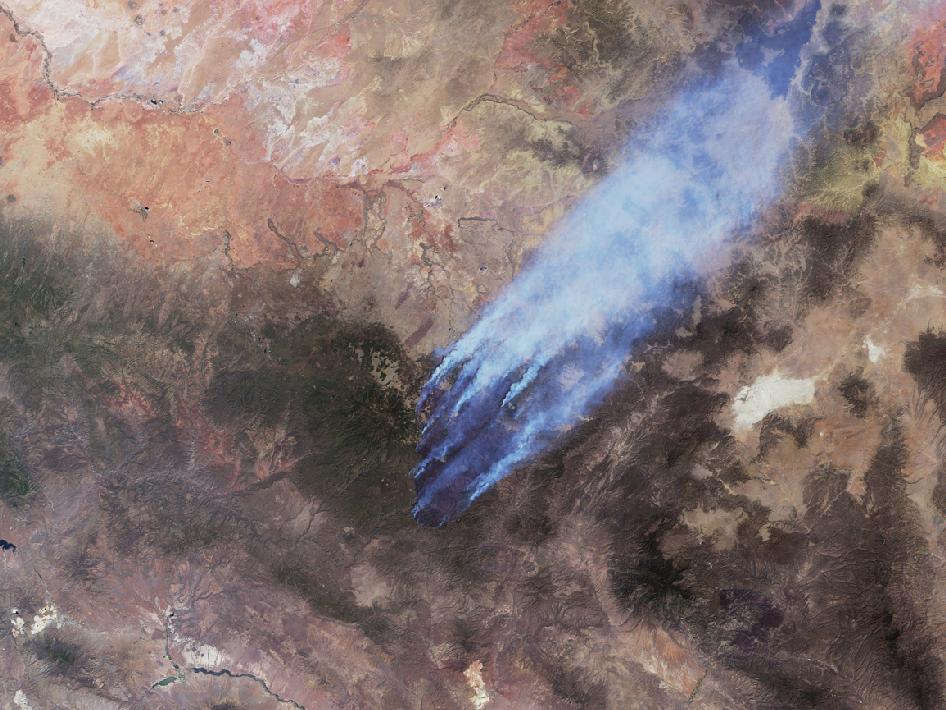 This image from NASA’s Multi-angle Imaging SpectroRadiometer (MISR) instrument on the Terra spacecraft show the Wallow and Horseshoe 2 Fires currently burning in Arizona. The data were acquired mid-morning (local time) on June 7, 2011. As of June 8, the large Wallow fire in the White Mountains has burned more than 389,000 acres (more than 608 square miles, or 1,574 square kilometers) and is currently the second largest fire in Arizona history. More than 3,000 people are working to contain the fire, which is being driven by high winds and low humidity. The smaller Horseshoe 2 Fire in the Chiricahua Mountains has burned more than 106,000 acres (166 square miles, or more than 429 square kilometers) in southeastern Arizona.

The Wallow Fire is in the center of the MISR image. Nearly 10 distinct bluish-colored smoke plumes can be seen blowing toward the upper right (northeast). The green pine forests of the White Mountains stand out against the lighter desert background. In this image, the windblown smoke is seen extending into New Mexico; smoke from this fire has been carried over the Great Plains as far as Iowa. The city of Tucson, Az., is in the lower left portion of the image, and appears in shades of gray. The bright region to the east of Tucson is the Wilcox Playa, and smoke from the the Horseshoe 2 Fire is visible to the east. The entire image covers an area measuring 206 miles (331 kilometers) by 264 miles (425 kilometers).

The Wallow Fire now threatens to move into New Mexico in the historically rich Gila and Apache-Sitegraves National Forests, where scientists estimate there are several thousand archaeological sites. There is evidence of 12,000 years of human history in the area, including a multi-sory cliff palace.

Also in the area, threatened in the conflagration: power lines carrying electricity from the Palo Verde nuclear plant near Phoenix to New Mexico and West Texas.

The blaze, which is believed to have been started by campers, ranks as Arizona’s second-largest forest fire on record after the Rodeo-Chediski fire from 2002 that also burned through the White Mountains. Experts say the logging of big trees an heavy livestock grazing in the last century helped lay the foundation for both these massive conflagrations. Cutting the old ponderosas opened the forest floor to dense young growth. Grazing eliminated the grasses that fed the frequent, low-intensity fires to which the pineland vegetation had adapted. Federal policies to to douse these forest fires quickly compounded the problem by promoting the buildup of brush and unnaturally thick stands of trees. 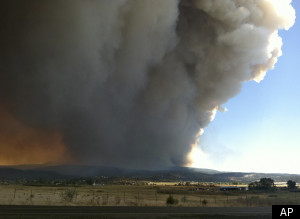 “We need to turn forestry on its head,” said Wally Covington, director of the Ecological Restoration Institute at Northern Arizona University. “Leave the old growth alone … focus on harvesting the small-diameter trees. Open the forest to restore more natural conditions and then reintroduce fire.”

A pioneering program in the Apache-Sitgreaves National Forest that embraces the White Mountains towns has been doing just that. About 35,000 acres have been thinned near the communities as part of an ongoing Forest Service project to reduce the fire risk and supply local wood operations with small trees they turn into fencing, wood pellets and lumber.

Rick Davalos, supervising ranger of the Alpine Ranger District, said forest thinning that created buffers as wide as half a mile spared the communities of Alpine and Nutrioso.

When the Wallow, which was barreling through treetops, reached the thinned-out stretches, the flames died down and spread across the ground, where they were easier to snuff out. “The fire did exactly what we predicted,” he said. “It couldn’t go from tree to tree because it’s not as dense.”

A handful of structures have been lost, but “it’s not even 1%,” Davalos said. “If we hadn’t thinned around here, firefighters probably wouldn’t have had time to save a lot of structures.”

Some blame the Center for Biological Diversity for stopping the logging. Todd Schulke of the Center noted that environmentalists had not filed a lawsuit on the Apache-Sitgreaves for a decade. “We’ve really poured our hearts and souls into community protection and landscape restoration,” he said. “It’s unfortunate people are still stuck in the 1990s. Our hope is with success, the narrative will change.”

Arizona Wildfire in Photos, The Atlantic.