By
Jack Eidt
– Posted on May 5, 2012Posted in: Eco-Cultural-Travel, Wildlife

Following the footsteps of Willis E. Pequegnat, a biologist from the 1930s who explored the wild Santa Ana Mountains in Orange, Riverside, and San Diego Counties, this video field journal logs the wonders and threats to this thriving resource. The Santa Ana Mountains rise just inland from the Pacific Ocean, surrounded by the growing Southern California urban sprawl, yet retain wild habitat for hundreds of species, some found nowhere else on earth. In fact, the range is considered the last intact coastal ecosystem in Southern California.

The Santa Ana Mountains, part of the California Floristic Province, a biological hot spot featuring a tremendous amount of species diversity. Nevertheless, the area has little protection. Dams, roads, residential development, energy infrastructure, pollution, catastrophic fires and floods and misuse threaten the range. Perhaps though, the most dangerous threat to the range is the disconnection and apathy of the millions who dwell at its feet.

Hence, the Santa Ana Mountains Wild Heritage Project, with support from FHBP, endeavored to document the wonders of the canyons and ridges, identifying species of plants and animals and musing on threats to the ecosystem near and far.

In 2008, a group of adventure seekers followed in the footsteps of Willis E. Pequegnat, a biologist from the 1930s, and explored the wild Santa Ana Mountains in Orange, Riverside, and San Diego County.  This is a video field journal of their unexpected observations and experiences. © 2012.  Directed, written, and edited by Patrick Mitchell, Kirk Pickler, Joel Robinson, and Sama Wareh.  http://www.santaanamountains.org Loss of biodiversity through habitat destruction and mass species extinctions appears to affect ecosystems as much as climate change, pollution and other major forms of environmental stress, according to results of a new study by an international research team. The results, published in a recent issue of the journal Nature, highlight the need for stronger local, national and international efforts to protect ecosystem biodiversity. Fundamental to environmental systems, it fosters clean air, water, and sustenance for the earth’s inhabitants, according to the researchers, who are based at nine institutions in the United States, Canada and Sweden. The Santa Ana Mountains Wild Heritage Project proposes that a National Monument be dedicated to the California Grizzly, last seen in these mountains in 1908. Photo By Terry Tollefsbol/US Fish and Wildlife Service

The Santa Ana Mountains Team proposes a number of protections and programs, including a potential designation of the Trabuco Ranger District of the Cleveland National Forest as a new Grizzly Bear National Monument in honor of the famously extirpated former resident last seen in 1908. 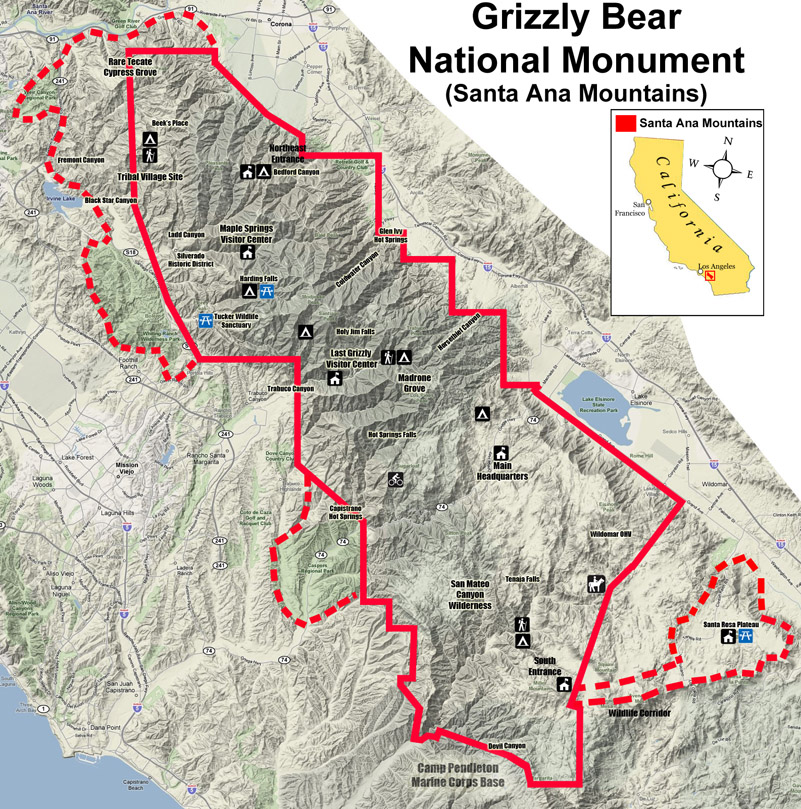