By
The Outpost
– Posted on April 16, 2016Posted in: Humanity, International Issues

The indigenous Rama people of Nicaragua’s Atlantic Coast speak out in a new documentary against an inter-oceanic canal which threatens their ancestral land, language, and traditional culture. Support the project: CLICK HERE! According to a complaint filed in June 2014 to the Inter-American Commission on Human Rights by indigenous governments of Nicaragua’s South Atlantic Autonomous Region (RAAS), 40 percent of the proposed inter-oceanic Gran Canal route passes through indigenous and Afrodescendent territory. Yet these communities were never consulted before the concession law was passed. Image: The village of Rama Village of Bangkakuk, by Alex Garcis from AlJazeera America

The Rama people have lived on the Atlantic Coast of Nicaragua for thousands of years, long before the existence of the nation state. Nicaragua’s Law 445 recognizes indigenous ownership of traditional lands and natural resources; but for decades, settlers from the Pacific have taken vast amounts of Rama territory causing massive deforestation and threatening the Rama way of life.

“In the water we have our money. We have lobster, fish, shrimp. When the Chinese come… those things will be [gone]. I feel it.” — Jimmy McCrae

In 2013 the Nicaraguan government passed Law 840 allowing the Chinese investment firm Hong Kong Nicaragua Development to construct an interoceanic canal without any public consultation or debate. Though the government hails the project as the means to lift the nation out of poverty, hundreds of thousands of Nicaraguans would be forced from their land and the environmental impact could devastate the country’s rich ecosystem of lakes, rivers, and forests. Almost half of the 160 mile canal would cut through the Southern Atlantic Autonomous Region which is home to the Rama.

“Here we pass many things,” said Carlos Wilson Bilis, 31, speaking in the Creole English characteristic of the Miskitu Coast of Nicaragua. “We pass the war, we pass the hurricane. Many things we pass here. And the government didn’t help us. Now he want to come and destroy us.” 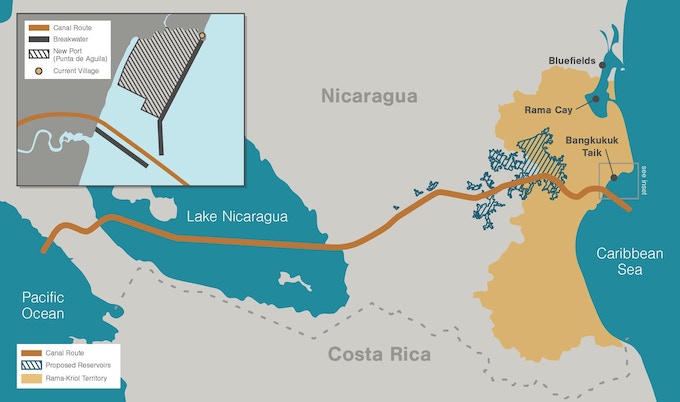 In 2014 it was announced that the proposed canal route would cut directly through the Rama village of Bangkukuk, removing the community from their land and way of life. Since then, government officials have been pressuring community members to sign land concessions without legal consultation. In response, community leaders and local officials have partnered with indigenous rights groups to combat this land grab by bringing their case to the Inter-American Court.

The film Bangkukuk is a collaboration between Art of Solidarity and village leaders aimed at sharing their story with the international community. This short trailer is just a glimpse into an upcoming feature-length documentary film that will give voice to the many communities, organizations, and activists at the front lines of the indigenous rights and anti-canal movements in Nicaragua.

SUPPORT THE MAKING OF THIS IMPORTANT FILM AT KICKSTARTER.COM

Bangkakuk community member Jose Luis states, “None of us is professional to work in a canal. That is clear.” He continues, “Maybe it could be for wash shoes. For them. Maybe. Because them no going to include we in no canal.”

Another Rama Documentary: This Land is for All of We: A small Rama community in Bangkukuk, Nicaragua, speaks out about the Grand Canal Project