The Association for Tropical Biology and Conservation (ATBC) — the world’s largest association of tropical biologists and conservationists — warns about the Gran Canal’s impact on water security and indigenous people.

The canal will slice through the Reserva Natural Cerro Silva and then cross Lake Nicaragua close to the volcanic island of Ometepe. Photograph: Oswaldo Rivas/Reuters

Scientific association calls on Nicaragua to scrap its Gran Canal

By Jeremy Hance, Published in Mongabay.com

The Association for Tropical Biology and Conservation (ATBC)—the world’s largest association of tropical biologists and conservationists—has advised Nicaragua to halt its ambitious plan to build a massive canal across the country. The ATBC warns that the Chinese-backed canal, also known as the Gran Canal, will have devastating impacts on Nicaragua’s water security, its forests and wildlife, and local people.

“The Canal and its sub-projects…will result in the excavation of 278 kilometers of land, lake and rivers, cutting through pristine rainforest and the largest drinking-water reservoir in Central America,” reads the group’s statement.

“This is one of the most fertile regions in Nicaragua, and the government has sold it behind our backs to the Chinese, they’ve sold our heritage, our sovereignty,” says Arnulfo Sequeira, 51, a father of four with 200 acres of land and 100 cattle.  — The Telegraph

If built, the project would rival the Panama canal: it will be four times as long as well as wider and deeper than its southern cousin. Pushed by telecommunications millionaire, Wang Jing, the $40 billion project would be run by the newly-formed Hong Kong Nicaragua Canal Development Investment Company (HKND Group). The Nicaragua government has given the HKND Group a 50 year concession over the canal with a chance to renew it another 50 years.

The Nicaraguan government argues that the canal will drastically boost the country’s economy—the second poorest in the Western Hemisphere—boasting it will lift 400,000 people out of poverty by 2018. But environmentalists and indigenous rights groups have been warned that it could be an unmitigated disaster. 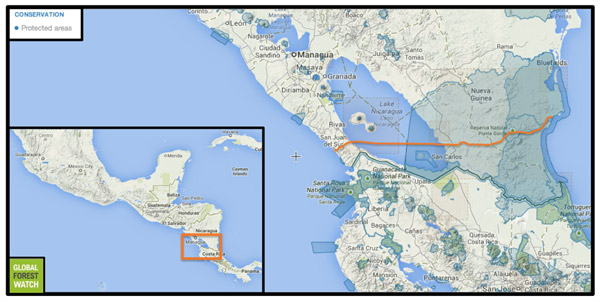 Passing through numerous protected areas—and impacting an estimated 400,000 hectares of land—the ATBC said the canal will cut the Mesoamerican Biological Corridor in half. This mega-wildlife corridor, made up of various types of protected areas, connects biodiversity across eight countries in Central America, including Nicaragua.

“The canal and its infrastructure will create a significant dispersal barrier for plants and animals,” said the ATBC in a statement.

Moreover, the construction of the canal could lead to a water crisis in the already-impoverished country, according to the association. As proposed, the canal will pass through Nicaragua’s largest lake—Lake Cocibolca or Lake Nicaragua—via a massive trench dug through the bottom of the lake, requiring the removal of over a billion tons of sediment.

“I’m not against the canal or development, but this project is brutal,” says Roger Garcia Rios, 69, a retired biology professor. “It’s inhumane and unpatriotic. Any risk to our lake is unacceptable and we will do everything humanly possible to protect it. Without water, there is no life.”  — The Telegraph

“As the region’s largest fresh water reservoir, with enormous and long-term strategic value, such changes [to Lake Cocibolca] will have severe and potentially irreversible impacts on the ecology of the lake, especially in the context of a changing climate and dwindling fresh water resources,” the ATBC said. “Lake Cocibolca is also vital for regional food security and is instrumental to meeting future development and agricultural needs in the semiarid and highly populated Pacific slope of Central America.” 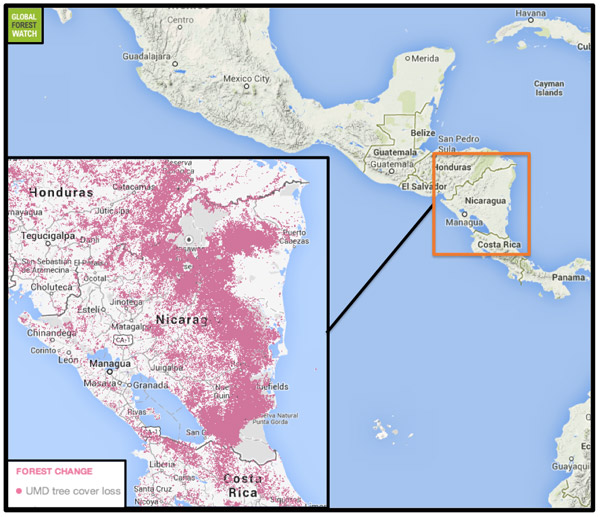 Forest loss across Nicaragua from 2001-2013. Experts predict that the building of the Gran Canal will exacerbate deforestation considerably in the country. Data from Global Forest Watch.

The group also warns that oil spills from massive transoceanic ships passing through the canal daily will further degrade the country’s ability to supply adequate freshwater to its populace. Nicaragua is already rated one of the least water secure countries in the world.

Finally, the canal is also set to displace local and indigenous people across its nearly 300 kilometer path. Given this, the ATBC, attests that “the development of the Canal violates the Nicaraguan Constitution and its fundamental principles…which recognize and guarantee the inalienability of indigenous’ and afro-descendants’ lands, which cannot be sold, donated nor leased.”

Experts have estimated that at least nine indigenous and Afro-Nicaraguans communities will face removal if the canal is built.

ATBC suggests that the Nicaraguan Government put the canal on ice while allowing the Inter-American Commission on Human Rights (IACHR) and UNESCO to conduct “a thorough, transparent and independent scientific review of the long term environmental and social consequences” of the monster project. Historic Canal Hunger: Railroad tycoon Cornelius Vanderbilt operated a shuttle through Nicaragua in the 1840s — taking would-be California Gold Rush prospectors from Caribbean ports up the San Juan River and across Lake Nicaragua before shuttling them overland to the Pacific, where they could resume their journey by ship to San Francisco. 1885 Broadstreet Atlas from the David Rumsey Map Collection.

“The speakers for the canal concessionary have publicly expressed a ‘hope’ that this project will immediately rocket Nicaragua out of poverty and even into double-digit annual economic growth, with abundant training and job opportunities for Nicaraguans,” Jorge Huete-Perez, the founder and director of the Molecular Biology Center at the University of Central America, told mongabay.com in August. “But unfortunately they have never shown any data to back these claims, instead they ask for people to have ‘faith.’ But as our history has shown [some] individuals may become wealthy at the expense of the country’s natural resources while the vast majority can only become poorer.”