The controversial Belo Monte dam, operational in 2016 and the world’s third biggest, was forced on the people of Altamira, Pará state, and is now believed to have been built largely as payback to Brazil’s construction industry by the nation’s then ruling Workers’ Party for campaign contributions received. 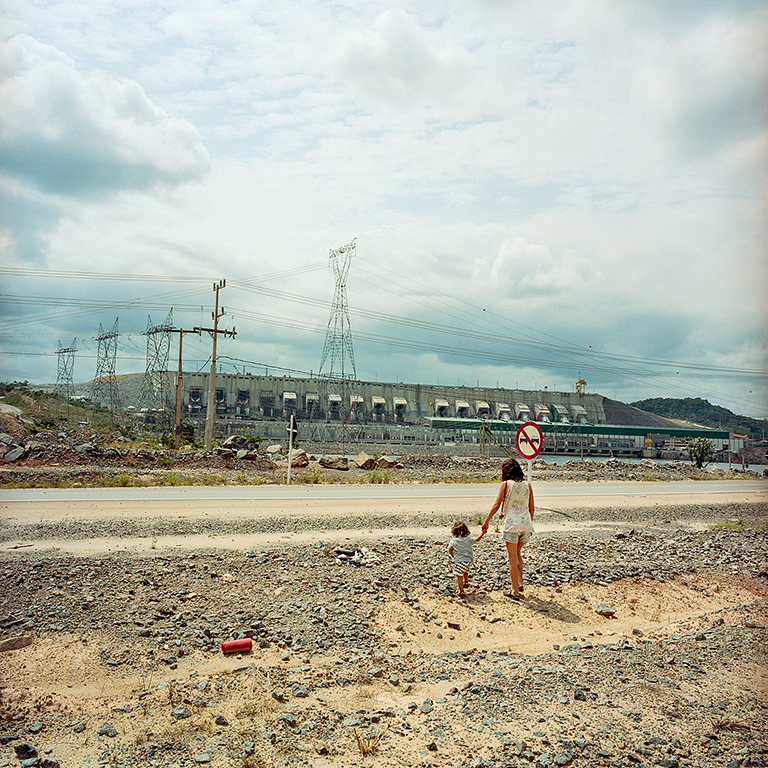 Ana De Francisco, an Altamira-based anthropologist and her son Thomas, visit the Belo Monte Dam in 2016. De Fransisco works for the regional office of the Socio-Environmental Institute (ISA), an influential Brazilian NGO focusing on environmental and human rights issues. She has been doing research for her PhD on the displacement of ribeirinho (traditional riverine) communities in the Xingu region. Photo by Aaron Vincent Elkaim/The Alexia Foundation

The Brazilian Supreme Court has overturned the suspension of the Belo Monte Dam, caving to pressure from President Dilma Rousseff’s  administration without giving appropriate consideration to indigenous rights implications of the case, human rights groups said. The case illustrates the Brazilian judiciary’s alarming lack of independence, when powerful interests are at stake.

Adapted from Tom Phillips in The Guardian

A Brazilian judge had ordered construction to be suspended on this controversial hydroelectric dam in the Amazon. In his ruling, Judge Carlos Castro Martins said that all working on the Belo Monte dam that interfered with the natural course of the Xingu river should be halted because of the risk that fish stocks would be damaged.

The £7bn dam would reputedly be the third largest in the world, after China’s Three Gorges and the Itaipu project on the Brazil-Paraguay border. The injunction is the latest development in a decades-long battle against the Belo Monte dam, plans for which were conceived in the mid-1970s but subsequently shelved after protests. Brazil’s government argues that the dam is essential to the energy needs of the country’s booming economy. A full environmental licence for the construction was issued in June, with federal authorities promising a series of initiatives to lessen the social and environmental impact of the dam.

On Tuesday, activists from the anti-dam Xingu Para Sempre movement claimed the project had brought unprecedented chaos to the riverside town of Altamira, with thousands of impoverished migrants having arrived by boat or road in search of work. “Nothing good is coming to the region and all of our darkest prophesies are coming true,” Antonia Melo, one of the movement’s leaders, said. Earlier this week, politicians from Altamira’s townhall filed papers with the regional public prosecutor, asking for work on the dam to be interrupted. “The former president, Luiz Inacio Lula da Silva, publicly promised … that the project would bring major benefits to Altamira and 10 other towns around this mega-project,” the document said. “But what we have so far seen are painful frustrations such as increased poverty, insecurity and social chaos.”

On September 28 the judge issued his ruling to suspend building work. However, according to the BBC, any work on the dam that wouldn’t effect local fishing can still continue, including the construction of “accommodation blocks for the project’s many workers”.

While there has long been widespread opposition to the dam from environmentalists, social activists and even Hollywood figures such as the director James Cameron, Altamira’s political leaders have been broadly supportive of Belo Monte in the past, arguing it could bring development to the region.

Norte Energia, the consortium behind Belo Monte’s construction, is expected to appeal against the decision. See the regional destructive impacts in an interactive map on the Guardian site.

Stop the Belo Monte Monster Dam! Send a message to Brazilian president Dilma Rousseff, urging her to defend the Amazon and its people by stopping the Belo Monte Dam!

Belo Monte Hydroelectric Complex – The Story of a War

From Amazon Watch: The Brazilian government continues moving ahead “at any cost” with plans to build the third-largest dam in the world on the Xingu River in the state of Pará. The Belo Monte dam complex dates back to Brazil’s military dictatorship and the government has attempted to build it through various series of national investment programs including Brasil em Ação and the Program to Accelerate Growth. Original plans to dam the Xingu have been greenwashed through multiple public relations programs over the course of two decades in the face of intense national and international protest.

Impacts on Environment and People

In order to feed the powerhouse of the Belo Monte dam complex, up to 80% of the Xingu River will be diverted from its original course, causing a permanent drought on the river’s “Big Bend,” and directly affecting the Paquiçamba and Arara territories of the Juruna and Arara indigenous peoples. To make this possible, two huge canals 500 meters wide by 75 km long will be excavated, unearthing more land than was removed to build the Panama Canal. Belo Monte’s two reservoirs and canals will flood a total of 668 km2 of which 400 km2 is standing forest. The flooding will also force more than 20,000 people from their homes in the municipalities of Altamira and Vitoria do Xingu.

Hydroelectric energy is touted as both a solution to Brazil’s periodic blackouts and as a “clean development” approach to global climate change. However, Philip Fearnside of the National Amazon Research Institute (INPA) has calculated that the forests flooded by Belo Monte’s reservoirs will generate enormous quantities of methane, a greenhouse gas that is 25 times more potent than CO2.

Belo Monte will also attract 100,000 migrants to the region. However, at the height of construction, only 40,000 jobs — only 2,000 of them long-term — will have been created. The remaining labor pool will be driven to resort to illegal logging and cattle ranching, the two main causes of deforestation in the Amazon. In addition, new migrants could fuel social tensions as they look for work, pushing into indigenous territories and protected areas to carve out a livelihood. Meanwhile, the needs of those who do find jobs will add pressure to an already weak infrastructure and social services in the largest cities.

For the Xingu’s poor farmers, temporary employment created by the dam is not a viable replacement for lost agricultural lands and the river’s fish supply. Considered an “obstacle” to business interests, indigenous peoples are particularly vulnerable. Mega-projects typically confront indigenous communities with disease, loss of food and clean water sources, cultural disintegration and human rights abuses by illegal loggers, migrant workers and land speculators. The indirect and long term impacts of Belo Monte are of even greater concern as other unsustainable industries such as aluminum and metal refineries, soy plantations, logging, and mining expand into the area.

Belo Monte will be one of the most energy inefficient dams in the history of Brazil. It will produce only 10% of its 11,233 megawatt (MW) installed capacity during the 3-5 month-long dry season, an average of only 4,462 MW throughout the year, or 39% of its nominal capacity. To guarantee a year-round flow of water, the government would need to construct a series of large dams on the Xingu and its tributaries that will gravely impact forests and forest peoples.