By
The Outpost
– Posted on April 6, 2011Posted in: Environmental Health The Outpost has been following closely the dangers of the ongoing emergency at the Fukushima Daiichi Nuclear Plant and the international debate of the fallout, from a political and environmental health point of view.  Stay tuned to our The Outpost – Latest News Page for updates.

Among the new threats that were cited in the assessment, dated March 26, are the mounting stresses placed on the containment structures as they fill with radioactive cooling water, making them more vulnerable to rupture in one of the aftershocks rattling the site after the earthquake and tsunami of March 11. The document also cites the possibility of explosions inside the containment structures due to the release of hydrogen and oxygen from seawater pumped into the reactors, and offers new details on how semimolten fuel rods and salt buildup are impeding the flow of fresh water meant to cool the nuclear cores.

BBC News: “Japan Earthquake: Radiation Leak Plugged at Reactor – Situation Remains Grave,” 6 April 2011.  The cooling operation is creating a river of highly radioactive water flowing throughout of the reactor building that has spilled over into groundwater and the ocean. Japan is now asking for Russia to bring in a floating radiation treatment facility to begin to filter the radioactive river.

The scientific discussion that may stop the apocalyptic process of polluting the earth with radioactive particles that get into human blood through air flows and destroy human DNA irreparably. Filmed by Ditta Rietuma. 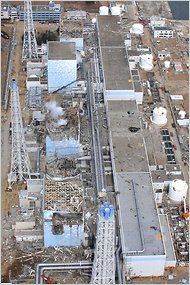 
Dahr Jamail: “No Safe Levels of Radiation in Japan, Experts Warn that any Detectable Level is Too Much,” AlJazeera, 4 April 2011.

John Upton: “Government Under Fire as Radiation is Found in Milk, Rain,” The Bay Citizen, April 2, 2011.

Institute for Energy and Environmental Research (IEER): Radioactive Iodine Releases from Japan’s Fukushima Daiichi Reactors may exceed those from Three Mile Island by over 100,000 times.

The French radiation protection authority, Institut de Radioprotection et de Sûreté Nucléaire (IRSN), estimates the radioactive releases of iodine-131 in Japan had reached about 2.4 million curies by March 22, 2011. That is about 160,000 times the best estimate of the amount released during the TMI accident in Pennsylvania (15 curies) and about 140,000 times the maximum estimate of 17 curies. It is about 10 percent of the estimated amount released during the Chernobyl accident, according to the IRSN.

The primary risk of concern with iodine-131 is thyroid cancer, with children more at risk than adults. A high enough intake of iodine-131 by children can also cause developmental problems and other thyroid diseases. Some iodine-131 deposits on land, including pastures. When contaminated grass is eaten by cows and goats, iodine-131 concentrates in milk. It has a half-life of about eight days, meaning that appreciable amounts will remain in the environment for a few months after large releases. Cesium-137 will take a few hundred years to decay to very low levels. Some cesium-137 from atmospheric testing in the 1950s and 1960s is still present in soil all over the world. It causes all types of radiogenic cancers since it distributes itself all over the body, like potassium. Cesium-137 contamination is the main reason that a huge exclusion zone (about 1,000 square miles) still needs to be maintained around Chernobyl.

The radioactive fallout from the damaged Fukushima reactors has already covered substantial parts of Honshu, Japan’s main island. Japanese officials have warned citizens against consuming 11 types of vegetables found to have higher than the legal levels of radioactivity, as well as milk from regions near the plant. They have urged residents to avoid giving tap water to children and infants.

“Reactor Core May Be Leaking,” CNN:

Authorities in Japan raised the prospect Friday of a likely breach in the all-important containment vessel of the No. 3 reactor at the stricken Fukushima Daiichi nuclear power plant, a potentially ominous development in the race to prevent a large-scale release of radiation.Contaminated water likely seeped through the containment vessel protecting the reactor’s core, said Hidehiko Nishiyama of the Japan Nuclear and Industrial Safety Agency.

Three employees working near the No. 3 reactor Thursday stepped into water that had 10,000 times the amount of radiation typical for a nuclear plant, Nishiyama said. An analysis of the contamination suggests “some sort of leakage” from the reactor core, signaling a possible break of the containment vessel that houses the core, he said.