Apple Cider Vinegar: Eternal Youth From the Tree of Life

By
The Outpost
– Posted on August 12, 2013Posted in: Environmental Health

A mystical fruit and a symbol of knowledge and immortality from antiquity, the apple, turned into apple cider vinegar, has a number of scientifically proven health remedies. According to John Summerly, it is a veritable acidic fountain of youth. Is Apple Cider Vinegar That Powerful of a Health Tonic? Science Says Yes

By John Summerly, Pubished in REALfarmacy.com

Apple cider vinegar (ACV) became well known in the U.S. in the late 1950s,  when it was promoted in the best-selling book Folk Medicine: A Vermont Doctor’s Guide to Good Health by D. C. Jarvis. During the alternative medicine boom of recent years, apple cider vinegar and apple  cider vinegar pills have become a popular dietary supplement.

Unpasteurized or organic ACV contains mother of vinegar, which has a cobweb-like appearance and can make the vinegar look  slightly congealed. It’s the only way apple cider vinegar should be  consumed.

ACV is used in salad dressings, marinades, vinaigrettes, food preservatives, and chutneys, among other things. It is made by crushing apples and squeezing out the liquid. Bacteria and yeast are added to the liquid to start the alcoholic fermentation process, and the sugars are turned into alcohol. In a second fermentation process, the alcohol is converted into vinegar by acetic acid-forming bacteria (acetobacter). Acetic acid and malic acid give vinegar its sour taste.

Toxic poi­sons are the cause of most trou­bles in the human body. Most peo­ple do not have suf­fi­cient vital force to sup­ply the elim­i­na­tive organs with the strength to remove nor­mal waste from the body. The tox­ins remain and lodge in the joints and organs of the body. We have a name for each symp­tom that gives us pain and trou­ble. Cer­tain toxic wastes that are harm­ful to the whole body are ren­dered harm­less by a mirac­u­lous sub­stance in organic, raw ACV with the pow­er­ful mother enzymes. — Patricia Bragg 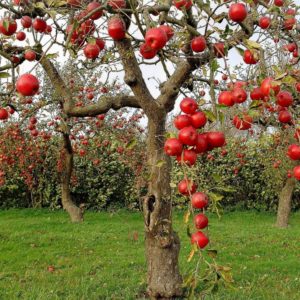 Apples grow on small, deciduous trees. The tree originated in Central Asia, where its wild ancestor, Malus sieversii, is still found today. Apples have been grown for thousands of years in Asia and Europe, and were brought to North America by European colonists.

Diabetes. The effect of apple cider vinegar on blood  sugar levels is perhaps the best researched and the most promising of APV’s health benefits. Several studies have found that vinegar may help lower glucose levels. For instance, a study (White, A. Diabetes Care, November  2007) of 11 people with type 2 diabetes found that taking two tablespoons of apple cider vinegar before bed lowered glucose levels in the morning by 4%-6%.

In another study from Arizona State University, subjects took a drink of 20 grams of apple cider vinegar and 40 grams of water. Those with insulin resistance who drank the vinegar had 34% lower postprandial (after-meal) glucose compared to controls. Vinegar may be the most cost-effective medicine in history, but most people with diabetes still aren’t taking it.

High Cholesterol. A 2006 study reported in Medscape General Medicine, showed evidence that ACV could lower cholesterol. In a study published in a foreign medical journal, scientists found an apple cider vinegar-enhanced diet may increase in HDL (good  cholesterol), and reduce levels of triglycerides. Research in rats suggests that apple-cider vinegar can help control triglycerides and cholesterol (Journal of Agricultural and Food Chemistry, June 22, 2011).

Blood Pressure and Heart Health. Another study in rats found that vinegar could lower high  blood pressure. A large observational study also found that people who ate oil and vinegar dressing on salads five to six times a week had lower rates of heart disease than people who didn’t. Researchers have suggested that “this reduction in blood pressure may be caused by the significant reduction in renin activity and the subsequent decrease in angiotensin II.” Potassium in the vinegar “balances sodium levels in the body, which aids in maintaining blood pressure within healthy limits” and “apple cider vinegar also contains magnesium, a mineral that works to relax blood vessel walls and thus lower high blood pressure.”

Cancer. A few laboratory studies have found that vinegar may be able to kill cancer cells or slow their growth. One study found that eating vinegar was associated with a decreased risk of  esophageal cancer. Another associated it with an increased risk of bladder cancer. In recent trials, pectin, which can be found in ACV, has shown promise in helping to slow the growth of cancerous cells within the prostate (http://www.news-medical.net/news/20100702/Modified-Citrus-Pectin-holds-promise-against-prostate-cancer.aspx). In addition, apple cider vinegar’s acidity aids in detoxifying and cleansing the digestive tract and cleaning out the colon, which supports the health of the prostate as well.

Weight Loss. For thousands of years, vinegar has been used for weight loss. White vinegar (and perhaps other types) might help people feel full. A study (Ostman, E. European Journal of  Clinical Nutrition, 2005) of 12 people found that those who ate a piece of bread along with small amounts of vinegar felt fuller and more satisfied than those who just ate the bread.

A 2009 study on mice showed that consuming acetic acid (the active component in ACV), upregulates the expression of genes for fatty acid oxidation enzymes in the liver causing a suppression in body fat accumulation. In a double-blind experiment, obese Japanese were assigned to three different groups based on similar body weights, body mass indexes (BMI), and waist circumference. Each group drank a 500 ml drink containing either 30ml, 15ml, or 0ml of vinegar daily for 12 weeks. Those in the 30ml and 15ml groups had lower BMI, visceral fat area, waist circumference, serum triglyceride, and body weight to the control group of 0ml. The 12-week weight losses were modest: 1.2kg in the 15ml group and 1.7kg in the 30ml group. These two groups consumed a similar number of calories to the control group and also performed a similar amount of exercise, so the effect is not likely to have been due to an impact on appetite or other lifestyle changes. It was concluded that consumption of vinegar might reduce obesity.

In Norse mythology, the goddess Iðunn is portrayed in the Prose Edda (written in the 13th century by Snorri Sturluson) as providing apples to the gods that give them eternal youthfulness. Painting By Carl Larsson.

Apple cider vinegar is chosen over white vinegar for many processes involving the elimination of fungus. Although they both have highly acidic properties; apple cider also contains detoxifying qualities that will clear up other skin allergies. No side effects have been found when treating the skin with apple cider vinegar, making it a cost effective and safe remedy.

Here are many other benefits of apple cider vinegar that can be applied to your lifestyle. Read the list below.

Hands and Feet: Are your hands and feet feeling tired  and swollen after a long day? Treat yourself to a personal spa massage by rubbing apple cider vinegar onto them.

Sunburn: Suffering from a bad sunburn? Add a cup of apple cider vinegar to your bath and soak for 10 minutes.

Aftershave: Fill a bottle with equal parts apple cider vinegar and water and shake to blend.

Detox: Add 2 tablespoon of apple cider vinegar to a 1  or 2 liter filtered water bottle. Drink this throughout the day to cleanse your  body and kidneys all day long.

Apples appear in many religious traditions, often as a mystical or forbidden fruit, a symbol for knowledge and immortality. In Greek mythology, the hero Heracles, as a part of his Twelve Labors, was required to travel to the Garden of the Hesperides and pick the golden apples off the Tree of Life growing at its center. Popular Christian tradition has held that it was an apple that Eve coaxed Adam to share with her in the Garden of Eden.

Digestion: A small amount of apple cider vinegar, taken just prior to a meal, will stimulate production of digestive juices.

Dandruff: A home remedy for dandruff is to mix 1/4 cup  apple cider vinegar with 1/4 cup water. The vinegar solution is thought to restore the restore the pH balance of the scalp and discourage the overgrowth of  malassezia furfur, the yeast-like fungus thought to trigger dandruff.

Stomach Aches: Mix 1 tablespoon of organic apple cider vinegar with 12 ounces of warm water, and drink in the morning on empty stomach.  Feel free to add a little honey or maple syrup.

Alkaline Acid Balance: Some alternative practitioners recommend using apple cider vinegar to restore alkaline acid balance. The theory  behind the alkaline diet is that our blood is slightly alkaline (with a normal pH level of between 7.35 and 7.45) and that our diet should reflect this pH level. Proponents of the alkaline-acid theory believe that a diet high in  acid-producing foods leads to lack of energy, excessive mucous production,  infections, anxiety, irritability, headache, sore throat, nasal and sinus  congestion, allergic reactions, and increased risk of conditions such as  arthritis and gout.

John Summerly is nutritionist, herbologist, and homeopathic practitioner. He is a leader in the natural health community and consults athletes, executives and most of all parents of children on the benefits of complementary therapies for health and prevention.