By
Jack Eidt
– Posted on May 19, 2013Posted in: Landscape, Transportation, Wildlife The first wildlife bridges were constructed in France during the 1950s. European countries including the Netherlands, Switzerland, Germany, and France have been using various crossing structures to reduce the conflict between wildlife and roads for several decades and use a variety of overpasses and underpasses to protect and reestablish wildlife such as: amphibians, badgers, ungulates, invertebrates, and other small mammals. Photo: Netherlands Highway A50 Ecoducts – Niels Verheul and Henri Cormont, RWS

Addicted to the Auto, Road-kill Happens

Humans, driving on the 4.8 million miles of roads in the US, must learn to coexist with migrating wildlife. Due to the proliferation of suburban sprawl, planned foremost for human transportation, collisions between animals and vehicles have increased by 50 per cent in the past 15 years. A U.S. Federal Highway Administration study reports between one and two million collisions happen between cars and large mammals every year in the U.S. This represents a significant danger to human safety and wildlife populations. Moreover, deer collisions can cause 200 yearly deaths, costing $8 billion with an average property damage of $6,600, according to Montana State University’s Western Transportation Institute. No Room to Run: The Confining Nature of Sprawl – Photo By Christoph Gielen

As we continue to invade wildlife habitats of animals, planners are increasingly taking into account the need for wildlife to have their own roadways so as not to end up as road-kill. Truly sustainable infrastructure honors place, community identity, biodiversity, and ecological resilience.

Studies have shown that roads and traffic affect animal populations detrimentally in four ways: “They decrease habitat amount and quality, enhance mortality due to collisions with vehicles, prevent access to resources on the other side of the road, and subdivide animal populations into smaller and more vulnerable fractions.” Road mortality is documented as one of the major threats to the survival of 21 federally listed threatened or endangered species in North America.

Wildlife crossings have been built since the 1950s not only to protect animals and people from collisions, but to blend roads, railroads, pipelines, etc., into the urban fabric. One of the proven solutions is to build wildlife crossing structures. Banff National Park has been the focus of efforts to mitigate the impacts of the Trans-Canada Highway on wildlife mortality and habitat fragmentation. A range of engineered mitigation measures—overpasses, underpasses, fencing—was designed to reduce wildlife mortality and increase population connectivity. In 12 years of monitoring, researchers have detected wildlife using these crossing structures more than 185,000 times. Photo: Izismile

Wildlife crossings can include underpass tunnels, viaducts, overpasses and bridges, amphibian tunnels, fish ladders, culverts and green roofs. Most common in Europe, they are usually referred to as ecoducts. The Netherlands accounts for more than 600 wildlife bridges, protecting the endangered European badger, wild boar, red deer, roe deer, among other species. North America, on the other hand, has some catching up to do to make sure furry—and otherwise—friends have the freedom to roam. US 93 through the Flathead Reservation in NW Montana includes an overpass that accommodates large animals, including grizzlies. According to design discussions, it’s at the “best possible location for linking grizzly bear populations to the east with the Bitterroot grizzly bear recovery zone to the west.” Photo By Bill Ruediger.

The reconstruction of US Highway 93 through Western Montana represents one of the most extensive wildlife-sensitive highway design efforts in North America. This 56 mile section includes 42 fish and wildlife crossing structures, 2 underpasses for live-stock and approximately 8.4 miles of fencing. This construction comes after several years of negotiations with Montana DOT, the Confederated Salish and Kootenai Tribes of the Flathead Nation and the Federal Highway Administration. Because of all the people working on this project, it has been named “The Peoples Way.” The ARC Wildlife Crossing Competition of 2010-11 challenged interdisciplinary design teams to create the next generation of wildlife crossing structures for North America’s roadways. The hypar-nature design concept combines design, ecology, and engineering into a solution that is both cost effective and elegantly simple. At its core, the design realizes that this landscape is not for humans. Rendering HNTB and Michael Van Valkenburgh and Associates.

The site selected for the design competition was West Vail Pass on I-70 in Colorado, about 90 miles west of Denver. Colorado’s I-70 corridor is considered to be a significant barrier to wildlife movement because it is the only east–west interstate providing for the movement of people, goods, and services across the state and bisects a critical habitat linkage in the Southern Rocky Mountain region.

The winning hypar-nature design concept combines design, ecology, and engineering into a cost effective solution that recognizes this landscape is not only for humans. The hypar-nature bridging system is inspired by the demands of ecological engineering, distilling the adjacent landscapes and habitats, condenses and amplifies multiple landscape bands (Forest, Meadow, Shrub, Scree) across the structure, and then extends these into habitat corridors that provide connections for a larger cross-section of species. The structure itself is composed of modular precast concrete hyperparaboloid (hypar) forms that allows for minimal site disturbance and easy creation, assembly, and deployment, and can be expanded or adapted as migration pressures dictate.

Hopefully this project and others like it will soon be constructed. 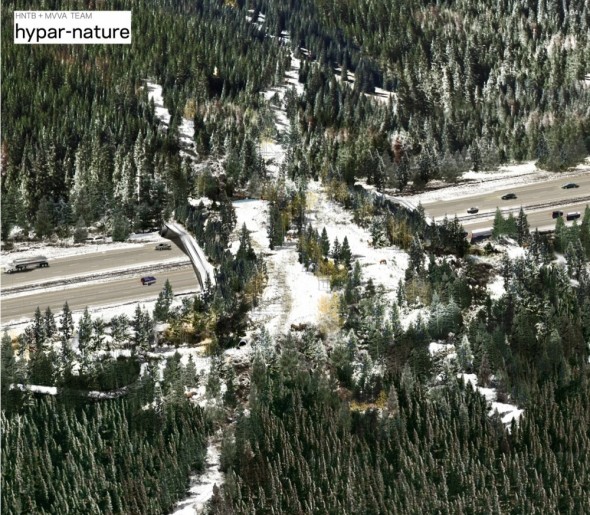 Hypar-Nature: The flexibility and efficiency of the bridge’s structural component makes it extremely suitable for widespread use, and its minimally invasive construction allows it to be adapted to any location. Rendering Michael Van Valkenburgh Associates