Washington State’s move to extirpate an entire pack of wolves near the Canadian border for the infraction of killing a few alien domestic cattle grazing public lands is reprehensible. That wildlife agencies would kill any wolves to benefit the profit margin of private businesses utilizing public resources is an outrage. George Wuerthner writes how the tragedy of this slaughter of wild predators repeats itself over and over throughout the West. 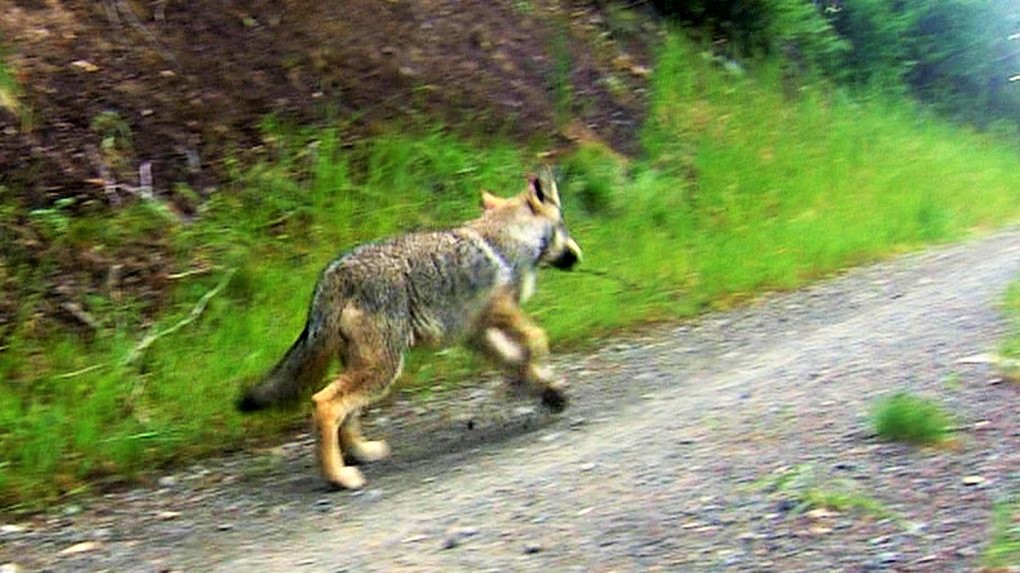 A gray wolf from the Wedge Pack trots away after being tranquilized to be tagged by state biologists near Colville, Stevens County, WA, in 2014. The wolf and seven others, the entire pack, are now wiped out for preying on large ungulates, as is their nature. Now the State Fish and Wildlife Agency is killing another pack that took their place. Photo: Carolyn Hall – King 5 Seattle

Caving to Ranchers: the Misguided Decision to Kill the Profanity Wolf Pack

By George Wuerthner, Published in CounterPunch

Washington Department of Fish and Wildlife has ordered that the Profanity wolf pack in northeast Washington be killed. The kill order is the result of on-going depredations of domestic cattle that are being grazed on [Colville] National Forest lands. The continued [helicopter] killing of the Profanity Peak Pack is emblematic of what is wrong with our wildlife policies, especially with regards to public lands.

The problem is expressed by the attitude represented in a recent quote from Donny Martorello, Fish and Wildlife wolf policy lead, said in a statement. “The department is committed to wolf recovery, but we also have a shared responsibility to protect livestock from repeated depredation by wolves.”

What about protecting wolves from repeated depredations by livestock? What about preserving the ecological role of large predators on our public lands?

If you leave your cooler on the picnic table in Yellowstone, or food accessible to wildlife in many backcountry areas, you can be fined for potentially introducing wild animals to human food sources. Yet we allow ranchers to place four-legged picnic baskets across our public lands—typically without any supervision.  — George Wuerthner

The typical reaction of state wildlife agencies to any predator conflicts is to remove the predators, rather than remove the livestock. However, grazing on public lands is a privilege, not a right.

While livestock grazing is a legally permitted use of public lands, that use is contingent upon livestock production not harming other public values. In this case, the killing of a wolf pack is an obvious harm to the public’s right to have healthy wildlife populations on our public lands.

But it goes beyond simply the killing of our wolves so that a commercial business can profit from exploiting our public lands. The mere presence of livestock socially displaces the prey of predators. Elk and other herbivores avoid areas that are being actively grazed by domestic livestock.

This means that predators like wolves may have to travel further to find food or alternatively they simply take the easiest and closest prey which may be domestic animals.

With aerial gunning, wolves are chased by helicopters and often run to exhaustion before being blasted by a shotgun as the helicopter hovers. They experience sheer terror. The actual act is something government agencies don’t want the public to see. Isn’t it odd that we see news coverage from war zones, but not from the war on our wildlife?  — Brooks Fahy, Seattle Times Washington Department of Fish & Wildlife authorized field staff to kill the Profanity Peak wolf pack to prevent more attacks on cattle in the rangelands between Republic and Kettle Falls. The state is home to at least 90 wolves and 19 packs as of early 2016.

Of course, by consuming the forage on public lands, domestic livestock are taking the food out of the mouths of wildlife like elk and other wildlife that support predators like wolves, cougar, and coyotes.

Furthermore, there is growing evidence that killing predators does not solve answer conflicts in the long run. Killing predators can fragment packs, or eliminate the more experience hunters in a pack.

Indiscriminate killing of predators as is common in Idaho, Wyoming and Montana also destroys the social bonds in packs, and skews packs towards younger animals. The remaining pack members may be less experienced at hunting and may not know the territory and information like where prey may winter or migration routes that is critical for a successful pack.

Robert Wielgus, director of the Large Carnivore Conservation Lab at Washington State University, has radio-collared 700 cattle and dozens of wolves, including animals in the Profanity Peak pack, as part of his ongoing study of conflicts between wolves and livestock in Washington. He also camera-monitors the Profanity Peak pack’s den. “This livestock operator [Len McIrvin of Diamond M Ranch] elected to put his livestock directly on top of their den site; we have pictures of cows swamping it, I just want people to know,” Wielgus said in an interview August 25th.  — Seattle Times

Remove Private Livestock for the Public Interest of Wildlife Survival

In reality we should be demand that livestock be removed from public lands whenever there is a conflict, rather than killing our wildlife.

Ethically we can ask why a private business exploiting our public lands should be given preference over the public’s interest in wildlife like wolves.

A long-term solution to conflicts between private business interests and the public interest in preserving its wildlife can be accomplished through permit retirement.

Permanently closing allotments precludes future conflicts forever and provides ranchers with a golden saddle. They can use the money to retire, or buy additional private lands.

Strategies like range riders, or other ideas that some organizations support to reduce conflicts does not really make the public lands safe for predators—our wildlife. Harassing public wildlife to facilitate private use of our public lands is ethically wrong in my view.

In the end, we should be working to provide safe havens for predators so they can exert their evolutionary influence on the landscape. Permit retirement is one way to help achieve this goal.

George Wuerthner is a former hunting guide with a degree in wildlife biology. He has published 36 books including Wildfire: A Century of Failed Forest Policy. He serves on the board of the Western Watersheds Project.