The Moskitia is the largest, most biodiverse expanse of tropical wilderness north of the Amazon Basin – and the Indigenous Peoples who live there are determined to keep it that way. Unfortunately, no greater threat exists to the natural wealth hidden in the “Mesoamerican Biological Corridor” than the gigantic, transnational Patuca II, IIA, and III Dams. 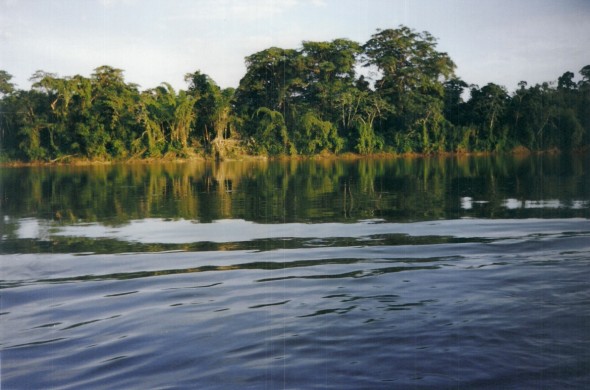 The Moskitia is the largest, most biodiverse expanse of tropical wilderness north of the Amazon Basin – and the Indigenous Peoples who live there are determined to keep it that way. Unfortunately, no greater threat exists to the natural wealth hidden in the “Mesoamerican Biological Corridor” than the gigantic, transnational Patuca II, IIA, and III Dams.

For thousands of years, Indigenous people have plied their dugout canoes up and down the Patuca River, the central artery of Honduras’ vast Moskitia lowland rainforest.  On its rich floodplain they grow cocoa, oranges, rice, beans, plantains, cassava, and other crops for subsistence and sale, and its fish provide a vital source of protein. The river winds through the Caribbean lowlands and numerous Miskitu villages before reaching the rainforests and mountains of the interior…where Patuca III is being constructed.

“The river is our life,” says Lorenzo Tinglas, president of the Tawahka people’s governing council on the website Cultural Survival.org. “Any threat to the Patuca is a threat to four Indigenous Peoples—the Tawahka, Pech, Miskitu, and Garifuna—and we will fight to the death to protect it.”

Fight to Stop the Dams

In January 2011, the Honduran congress approved a contract with SinoHydro, a Chinese company, to build the first of three dams (Patuca III or Piedras Amarillas) on the Patuca River. Sino Hydro is infamous for their disastrous construction of China’s Three Gorges Dam on the Yangtze River. As Norvin Goff, president of the Miskitu organization MASTA, commented, “The current government (unfairly elected, coup-backing President Pepe Lobo) is obsessed with bringing (multinational) external investments into the country.” They are doing so without regard for proper environmental studies nor for the right of Indigenous Peoples to Free, Prior, and Informed Consent before any projects are built in their territories. Location of the Patuca III dam relative to the Tawahka-Asagni and Rio Platano Biosphere Areas. Map from International Rivers.

Two former proposals to construct dams on the Patuca have failed. The Harza Company withdrew because in 1998 Hurricane Mitch eroded the riverbanks from massive inundations and the company deemed the river too unpredictable to sustain such a project. Taiwan Power’s decision to withdraw in 2007 was based on financial crisis, but Patuca Platform confirms it understood the endemic bank instability, and that real production capacity of the river is only half its predicted capacity of 100 megawatts, as rainfall inundations can be simultaneous and often unmeasurable, with the bulk of the water flowing into the Caribbean. Dam proponents, such as Honduras Weekly, continue to use original numbers, of 104 megawatts in 3 years, and 524 megawatts in 9 years.

In February, the four Indigenous groups and Afro-Hondurans who share the Moskitia formed a united movement to save the river, their livelihoods, and their unique cultures.

The Moskitia’s natural wealth is immense. Three reserves alone cover approximately a million hectares. These are the Río Platano Reserve, which was declared a World Heritage Site by UNESCO; the Reserve of the Tawahka Asangni Biosphere; and the Patuca National Park. The Patuca III involves flooding 42 km of intact rain forest, all of which was on the legislative track to either become part of the Patuca National Park or the Tawahka Asangni Biosphere Reserve. Unfortunately, with the 2009 coup, protection will not be achieved for now.

In addition, the Moskitia’s grassy plains make up Honduras’ most extensive intact rainforest area and form part of the “Mesoamerican Biological Corridor,” which runs from Mexico to Colombia and contains some of the richest biodiversity on the continent. This wealth, of world importance, is currently threatened by dangers that come from drug trafficking, land invasions and development projects.

La Moskitia’s threats emanate from the new U.S.-funded “Honduran” military base at Laguna Caratasca.  Ostensibly installed to fight the U.S.’s Drug War, it will also enforce development projects including the three dams planned for the Patuca, continued oil exploration, expansion of cattle ranching and large-scale logging, the ill-advised “green” capitalism of USAID-funded carbon credit projects, and other policies resulting from the continuation of the 2009 coup d’etat. All of which threaten the native Miskitu and Tawahka peoples and other Moskitia inhabitants with ethnocide, and cause mass ecocide. The river is part of the daily life of the Miskitu, for fishing, transport, and fertilizing the banks to grow their food crops. Photo By Jack Eidt.

Dams in the Moskitia tropical rainforest would decimate this richly diverse ecosystem both directly and indirectly, according to Cultural Survival. In the river, fish species that migrate upstream from the ocean during part of their life cycle would be blocked by the dams, threatening local extinctions. Downstream from the dam, the river’s volume, flow, and temperature would change, altering the habitats of shellfish, reptiles, amphibians, plants, and bird species. Upstream, the reservoirs would submerge rainforest vegetation, soils, and organic matter, which would emit greenhouse gases as they rot. Reservoirs in the tropics produce high amounts of methane and carbon dioxide, accelerating global warming. The reservoirs and a network of roads would obstruct the migration patterns of hundreds of rainforest species. In the Moskitia, this includes endangered species like jaguars and tapirs, whose survival depends on large territories.

Indigenous villagers who live along the Patuca’s banks depend on the river for their lives and livelihoods. It is their only means of transportation and communication through the vast, roadless Moskitia. Dams would obstruct commerce and trade for thousands of people. On stretches of river between the dams, the flows, currents, and channels would be altered; people whose knowledge of the Patuca has sustained  them for centuries would no longer master the river. Fish would disappear. Flood cycles that regularly wash nutrients over their agricultural lands would be changed. And road construction would open their forests to an unstoppable invasion of loggers, poachers, ranchers, and drug smugglers. The government plans to build a military base to protect the construction project. “These impacts will be fatal for the survival of the Tawahka as a unique people,” says their elected leader, Lorenzo Tinglas.

Norvin Goff of United Moskitia Organization of Honduras (Moskitia Asia Takanka or MASTA) speaks on Miskitu autonomy, impacts from hydroelectric dams on the Patuca River on the survival of the indigenous people, and climate change initiatives. February 2011, in Spanish.

Why were these specific locations picked for the three dams? Why is such a huge project still being considered the solution to Honduras’ energy problems if growing demand outstripped the capacity of the other hydroelectric giant, the El Cajón dam, even before the country had finished paying the debt contracted to build it? And why does the Honduran government continue to push a development with such significant impacts to cultures and ecosystems with such massive risks already sited in earlier abandoned proposals?

The Honduran government has not sufficiently explored other alternatives to generate electrical energy that are cheaper, more sustainable and more protective of the environment. Organizations and experts have presented such alternatives: the construction of small, decentralized stations; small and manageable hydroelectric schemes; renewable energy technologies such as solar, eolic and biomass; or more efficient ways to use the already available energy. All these alternatives would reduce the high costs of megaprojects such as Patuca III and would avoid its terrible ecological risks.

Please answer the call of the united Indigenous Peoples of the Moskitia : tell the Honduran government you stand with them against construction of the Patuca III dam.

A model letter is posted at http://www.culturalsurvival.org/take-action/honduras/2/model-letter

Send emails from the Cultural Survival website at http://www.culturalsurvival.org/take-action/honduras/2/send-email The Lower Patuca River during rainy season by Jack Eidt

Asian Rosewood: Soaked in Blood
Diego Rivera and the Fall and Rise of Detroit
Jack Eidt on the Nicaraguan Canal and Trans-Amazonian Railway
Rama People Fear End of Culture from Nicaraguan Interoceanic Canal
Wilderness of Minarets: On the Coyote Trail of Muir and Adams
Extreme Winds and Wildfires, On Overcoming California Climate Chaos
A Los Angeles Rail~Volution: A City in Sustainable Transition
"Embrace of the Serpent" Film: Journey of Healing and Ethnobotany
Drilling in the Caribbean: Honduran Indigenous Communities Speak Out