The latest NoDAPL March in Los Angeles, attended by thousands and organized by Indigenous and political groups, lays out The Way Forward on overcoming the incoming installed regime of the Orange One and his Corporate Hack Cabinet No Pipeline. The Southern California Indigenous community united with thousands to Stand with Standing Rock in Los Angeles on December 10, 2016. Photo by Mike Chickey.

The Way Forward: Unity in the Streets, Unity in Our Communities

Taking the Metro bus to the NoDAPL Los Angeles march on Saturday, December 10, I furtively read on my phone how The Orange One plans to nominate Rex Tillerson, corporate oil sovereign of Exxon-Mobil’s Criminal Global Climate Destabilization Force, as our next Secretary of State. Then I read about the installed-President-elect’s McCarthyite move requesting names of Energy Department employees responsible for implementing Barack Obama’s climate agenda. While the latter move was rejected, The Orange One most recently tapped Texas good-old-boy and former DAPL Parent Companies’ Board Member Governor Rick Perry as head of the Energy Department. The very same department the oops-candidate forgot when trying to list the three agencies he would abolish while running for Prez back in 2012.

You can make this shizzle up. The youth from Semillas del Pueblo school performs at the NoDAPL Rally at Pershing Square. Photo by Mike Chickey

We need a movement that transcends this billionaire-muckery, that sees beyond the brick walls and monsters-in-the-room that the Corporatocracy has presented with their list of “Dirty Deplorables” the installed Orange One regime has suggested as cabinet appointments. Moreover, these greed-huffing climate criminals have an agenda that will “lay waste to the US’s climate record and clean energy industry.”

More drilling here, there, everywhere, and that includes coal and fracked natural gas exported through LNG terminals, repealing Paris Agreements and the Clean Power Plan and anything else that stands between the Earth-Killing Bazillion-Dollar-Dreams of Big Oil. Pipe would be laid, yes Dakota Access, yes Keystone XL, to hell with rivers, air, Boreal Forests, aquifers that provide drinking water to 17 million people, treaties made more than 150 years ago.

To hell with you, and me, Grandma get out of the way, Big Oil is here: just keep driving gas-guzzling SUVs and pickups, keep heating your homes with gas-coal-electricity, keep making every damn product out of the fossil fuels, fertilize your food and store it in plastic, embedding the addiction deep into the soul of the world’s human inhabitants to the endangerment of everything else they hold dear. Standing Rock Solidarity in the streets, demanding a better tomorrow and the protection of Indigenous Rights. Photo by George Chang.

The fight against Dakota Access has reversed this mad dialectic, spun the gibberish the hucksters keep telling you, that you would not exist without burning some of that dinosaur juju. The Native Nations and Indigenous communities banding together conveys the spirit of the people in connection with the Earth to the fore, and the move to make some money at any cost is relegated to the back.

The Standing Rock Water Protectors have transcended the divide-and-conquer techniques of the US’s power-addiction based on the drive toward a neocolonial expedition to secure resources. They won’t have it, and the rest of us fighting for environmental rights see the power of Indigenous ways with prayer and song hits the heart and the soul, something sorely lacking from Save the Polar Bear and even John Muir’s old love for the dusty mountaintops campaigns. Those sacred mountains had been cleared of the true park rangers, forcibly removed were the Indigenous caretakers who refused to allow mining, mass hunting and trapping, and timber cutting, that would lead to railroads, homesteads, highways, cornfields, and condo building. Water is Life. Los Angeles understands this most particularly after six years of drought. Photo by Anne Martin.

Today, we must work together to connect people’s rights in the spirit of racial justice with Mother Nature’s rights, and overcome the Black Snake all all its pretty-looking products with a bite that will end everything we love.

Yes, we will not rid ourselves of fossil fuels anytime soon, as they are ever-present. Yet we can drive our cars or ride public transit powered with sun-stoked electricity or fourth generation sustainably-produced biofuels. We can heat our homes with wind-powered electricity and passive solar techniques. We can eat food grown organically without the toxic pesticides and herbicides carrying the secret fossil genes. We can build our homes and decorate them with materials that aren’t made with the side effect of slowly poisoning us. 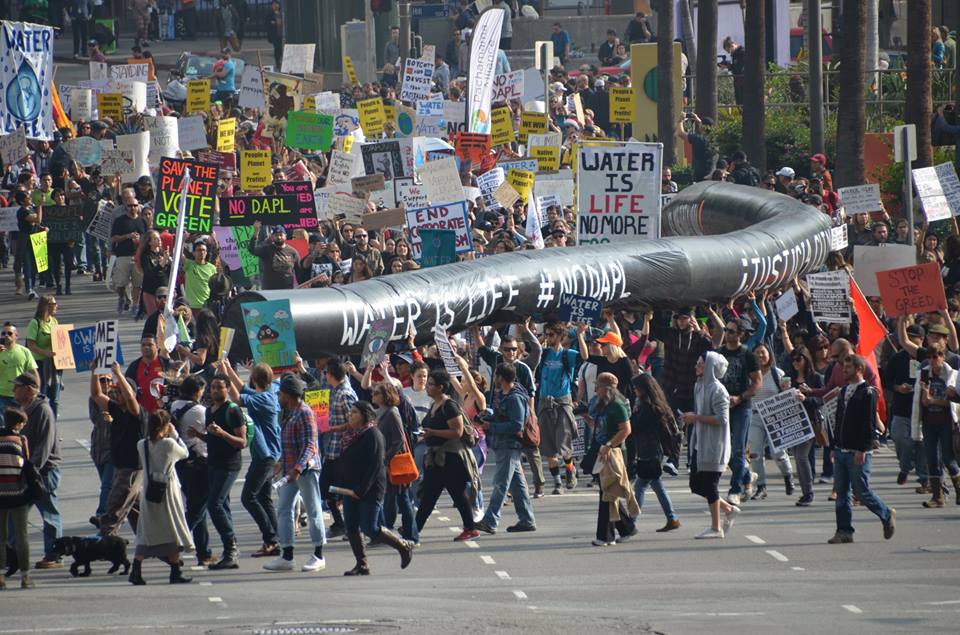 And we demand a government that will enable us to establish an economy that includes the rights of people and Mother Nature. We need regulations on power plants. We need to stop damaging fossil fuel infrastructure. We must ban extreme extraction methods like hydraulic fracturing, gravel packing, acidization, and cyclic steam injection, of extreme fossil fuels with high toxicity and volatility, like tar sands oil and this explosive Bakken shale. We must nurture clean technology and human innovation to solve what ails us. We must regulate automobiles and the freeway-building that keeps us addicted to them: They must become more efficient and less ubiquitous in favor of public transportation that unites urban landscapes rather than divides them with extreme sprawl and hour-long-commutes to work.

We all must work together on these issues, because we, together, can re-envision this capitalist dystopia now overseen by an over-entitled conscience-free quasi-billionaire and his retinue of corporate hacks bent on abolishing what we consider community. Leading the Way Forward with the Prayer Staff. Photo by George Chang.

The First Step: Prayer and Unity

The first step is finding each other on the streets of Los Angeles, San Francisco, Missoula, Independence, MO, Charlotte, Springfield, MA, wherever. We join in prayer with our Native Brothers and Sisters, because, sorry, this remains Native Land. We must not only acknowledge who we’ve dispossessed, but maybe learn a thing or two from them about the land we live on and a multitude of ways to resuscitate its vibrancy.

Then we march, we chant, we block the streets and call out to the cars and people who have no idea why we’ve come: “Up up up with the People. Down down down with the Pipeline.”

Stay tuned. We have more work to do.