“What is particularly depressing is that [Dr. James] Hansen has some genuinely important ideas, starting with placing a graduated carbon tax on fossil fuels. Such a tax would undoubtedly do far more to reduce carbon emissions and save the planet than stopping the Keystone XL pipeline. Trans-Pacific Partnership: Even if a Carbon Tax were to gain popular support it would become a target for fossil fuel corporations wielding weapons grade free trade agreements like the TPP.

“A carbon tax might be worth getting arrested over. But by allowing himself to be distracted by Keystone, Hansen is hurting the very cause he claims to care so much about.” — Joe Nocera, New York Times

Did you have a foolish April 1st? I spent my High Holiday traveling. At one point while semi-delirious in the Lost Vegas Airport, I felt a vibration in my pocket. Looking at the screen of my cell phone I surmised that my mother dear had sent me a text message. I opened the missive by pressing the ok button. I read “BIG NEWS: GRANDMA ARRESTED.”

Joe, you don’t know my Grandmammy, so you’re probably imagining a stereotypical geriatric in handcuffs. But my Grandmammy, though she has taught innumerable generations of Midwestern-Catholic Sunday School Students, isn’t stereotypical. Sure she’s a geriatric, 92?, but she’s been locked in heated battle with a foreign invader, Canadian Thistle, in the woods of Wisconsin for the past 30-odd years. It’s made her into a highly trained killing machine. It’s made her into a paragon of homeland defense. And I could easily see her deciding that at her ripe young age the time has come to play the non-violent direct action card. I promptly called my mother, eager for luminescent details.

“So what did she get arrested for?” I cut to the quick.

“Shoplifting…underwear.” The deadpan absurdity made my respiratory system sputter and my brain fart. Dr. James Hansen plans on ramping up his civil disobedience, stating that “as a government employee, you can’t testify against the government…at my age, I am not worried about having an arrest record.”

Later that very same day, I heard tell of Dr. James Hansen’s retirement, after 46 years of service, from NASA’s Goddard Institute for Space Studies. Understandably, I was guarded, suspicious. I thought the news could be the first farcical act of a neo-conservative splinter cell gone rogue from the Yes Men. Yet after 27 hours, the news persists uncontested. So I’m starting to believe.

Which brings me to you Joe, you must feel strangely vindicated? No? Your March 4th op-ed called for the action that Dr. Hansen is taking. You complained about Hansen’s political proselytization draped in a government title. You wondered at the potentially envious emotions felt by Hansen’s underlings. You dreamed that there might be mixed messages being sent and silent frustration brewing. Now, you might even be speculating that the Good Doctor was forced into retirement rather than willfully waltzing into the sunset.

Yet that is not the central reason why I write to you now, I write to offer my own apology. You see, in my last letter in response to your buffoonery, I made an error. I claimed that it was hard to believe that a carbon tax was a worthwhile pursuit when contrasted with the commitments of Trans-national trade agreements. That assertion displayed a fundamental lack of understanding as to what a Carbon Tax would forbear and what the looming Trans-Pacific Partnership would mean. Thanks to freely accessible Internet research, I’ve since amended that fundamental lack into a functioning level of comprehension…

The phrase “Carbon Tax” is a colloquialism referring to a tax placed on the release of carbon dioxide (CO2) into the atmosphere. Carbon Dioxide is released wherever and whenever any carbon-based fuel is combusted, i.e. coal, oil, natural gas. CO2 is the largest cause of climate change, which stands to become, if it isn’t already, the largest cause of human suffering. So the goal of a “Carbon Tax” is to encourage humans to spew less of it and thus limit or even reduce discomfort. The most common method to structure Carbon Taxes is to collect them at their source, from the folks that first sell proto-fuel into the market, from coal, oil or natural gas companies. The amount paid is based on the amount of CO2 the sold product will create.

There are currently carbon taxes in Sweden, Canada, Boulder, Colo., San Francisco, and other foreign lands. (The Carbon Tax Center has a full rundown.) And with remarkable frequency various entities float the idea of trying to get one passed for the entire U.S. Because in theory it’s all gravy. The revenue generated from the tax, which should really be called a fee, would be returned to the citizenry, either through reductions in other already existent taxes or through monthly dividend checks. That increase in cash would offset any inevitable increase in consumer product prices (i.e. the cost of gas at the pump) and would off-set already exorbitant financial stress caused by carbon release (i.e. medical bills and (un)natural disaster relief). 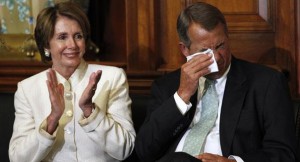 Rep. John Boehner gets emotional upon considering how angry a revenue-neutral fee on carbon pollution would make his Big Oil donors.

Yet the theory has little chance of emerging from the legislative gestation chambers into full-blown praxis. Why? Because Republicans Run the House of Representatives and Republicans no likey taxes. ¿Uh, quién es Grover Norquist?

When House Majority Leader, and a fellow Buckeye prone to emotionally triggered ocular discharge, John Boehner’s spokesman was asked if the speaker would ever consider a Carbon Tax to help address climate change and the deficit, the answer was monosyllabic: “No.” Which returns us to why it should not be called a tax but a fee. Because Republicans won’t cry heresy or break out in unsightly hives if asked to opine on the pros and cons of “fees.” Rest assured that semantics, unlike planking, will never go out of fashion.

The looming Trans-Pacific Partnership (TPP) refers to free trade agreement under negotiation between 13 countries: Australia, Brunei, Chile, Canada, Malaysia, Mexico, New Zealand, Peru, Singapore, the United States, Vietnam, Japan, and South Korea. It has been described as a NAFTA on steroids. Joe, when I started writing this letter I thought I needed to wipe some metaphorical egg off of my face, because I’d claimed something I wasn’t sure I could support, “A carbon tax (is not) a worthwhile pursuit when contrasted with the commitments of Trans-national trade agreements.” My paranoia told me that since I’d heard a click under my logical foot…I must have stepped on a landmine. But as luck would have it, my paranoia in this case did not prove an accurate agent of divination. The TPP really could threaten the enforcement of any prospective Carbon Tax. Yet my apology stands, as a writer who wants to be trusted, I should never again write that which I cannot factually and immediately corroborate.

The 8-year-old drafting of the TPP has been done behind closed doors. None of the potentially binding texts have been made public. The only persons who are not government officials with access to the documents are more than 600 business representatives. Even high ranking publicly elected politicians have been denied insight as to the actual contents of the TPP. This lack of transparency would under normal conditions lead to a bumper crop of conspiracy theories. However, some drafts have leaked which show many nightmarish conspiracies to be harsh actualities. One such leak revealed that the TPP would follow the same flawed model of past global trade agreements which have allowed foreign corporations to sue governments directly for unlimited cash compensation. Just cause for such a suit could be almost any domestic law believed by a corporation to be hurting its ability to profit. This ranges from perceived transgressions against intellectual property to dolphin safe tuna labels. That second example arose to the fore in May of 2012 when the World Trade Organization ruled that the labels discriminated against Mexican tuna hunters, never mind the dolphins or the consumers who appreciated the knowledge that their fish salads were not contaminated with mammal blood. The TPP would set further precedent for such absurd cases, injustices, of profit gaining preferential status at the expense of people.

So even if a Carbon Tax were to gain popular support domestically it would definitely become a target for fossil fuel corporations wielding weapons grade free trade agreements. Because the whole point of a Carbon Tax is to hurt the profit margins of those corporations!

To date, corporations such as ExxonMobil and Dow Chemical have launched more than 450 cases against 89 governments for trade violations. And nearly $675 million dollars worth of American taxpayer money has been paid to corporations under existing U.S. trade treaties. About 70% of that moolah has gone to, surprise, surprise, oil, gas and other mining industries.

Which, oddly enough, is precisely why I think Dr. Hansen is retiring. I think he realized that the Moloch, the machine, the boogieman, the leviathan, he hoped to slay was far larger than he initially guessed and would require a more sustained assault than a man with a day job as a research scientist could conceivably wage. Initially, he plans on lobbying for governments in Europe (not participating in the TPP) to adopt a tariff against oil derived from Tar Sands extraction. After that he plans on ramping up his civil disobedience stating that “as a government employee, you can’t testify against the government…at my age, I am not worried about having an arrest record.”

So Joe, I hope you forgive me. Now I’m going to write my grandmom a letter asking her to make my mother’s fib a truth. Asking her to reach an armistice with the Canadian thistle and to join Dr. Hansen not in shoplifting underwear, but in risking arrest by blockading Fossil Fools.

See you on the playground,

P.S. The TPP stuff has an awful lot to do with Hydraulic Fracturing (fracking)…“countries in the bloc will likely get automatic access to U.S. natural gas (obtained by fracking). Normally, the Department of Energy is required to examine whether exporting U.S. natural gas is in the public’s interest before it makes a decision on whether to export. That is a critical step in building a responsible energy policy that protects the public and the environment. But this crucial requirement is waived for countries that have signed a free trade agreement like the TPP with the U.S. This means that the United States could be forever ceding its ability to manage our own natural gas resources. It also means that even if U.S. exports are found to harm our economy and the environment — as there is every indication exports would — the U.S. would still be forced to send natural gas overseas to our trading partners without any review or delay.” – Ilana Soloman on the Huffington Post

P.P.S. Joe, this might interest you. A charismatic Italian Theorist.

P.P.P.S. Since I last wrote, another pipeline burst, this time in Arkansas, and a major investor in Tar Sands sold their holdings for a billion plus dollar loss.